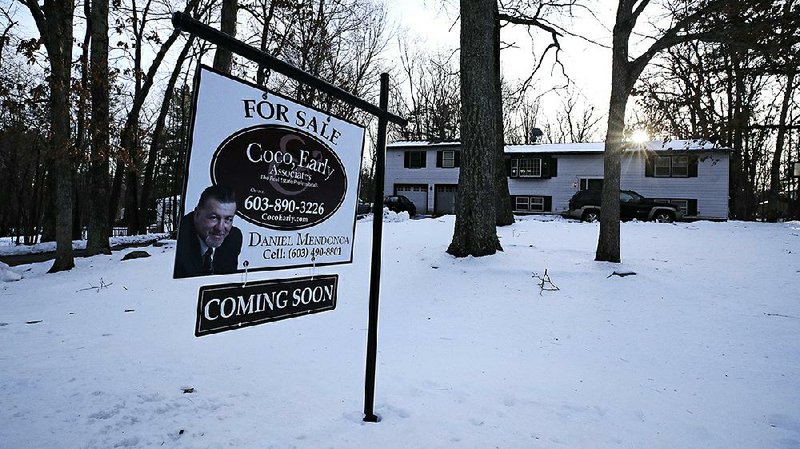 Mortgage rates rose 3.65% this week from 3.64% last week, buoyed by news of a solid economy and easing of geopolitical tensions. (AP/Charles Krupa)

WASHINGTON -- U.S. long-term mortgage rates rose slightly this week after financial markets that had been roiled by the U.S.-Iran conflict stabilized.

Mortgage buyer Freddie Mac said Thursday that the average rate for a 30-year fixed-rate mortgage ticked up to 3.65% from 3.64% last week. The benchmark rate was 4.45% a year ago. It hasn't been above 4% since May.

Freddie Mac -- the Federal Home Loan Mortgage Corp. -- surveys 125 lenders nationwide between Monday and Wednesday each week to compile its mortgage rate figures. The average doesn't include extra fees, known as points, which most borrowers must pay to get the lowest rates.

The average rate for a five-year adjustable-rate mortgage rose to 3.39% from 3.30% last week. The fee was unchanged at 0.3 point.

More than any other event or economic indicator, the U.S. trade dispute with China has been fueling uncertainty in the financial markets, which in turn has led to many of the wild swings in mortgage rates over the past several months. On Wednesday, after the signing of phase one of the U.S.-China trade agreement, the Dow Jones industrial average closed above 29,000 for the first time.

Despite the stock rally, long-term bond yields fell. The 10-year Treasury yield slipped to 1.79%. Yields usually move higher when the stock market rises because investors shift money from bonds to stocks, causing bond prices to fall and yields to rise. But investors appear wary until they know more about the deal.

"Wednesday's signing of an initial trade deal between China and the U.S. -- a major development in what has been the most impactful story in bond markets over the past several months -- prompted only a small response from investors that are otherwise cautiously digesting the news," Speakman said. "The fact that many tariffs will remain in place illustrates the distance that still remains between the two nations and that will need to be covered in order to come to an enduring agreement."

The trade agreement came too late in the week to be factored into Freddie Mac's survey.

Meanwhile, mortgage applications soared coming out of the Christmas holiday. According to the latest data from the Mortgage Bankers Association, the market composite index -- a measure of total loan application volume -- increased 30.2% last week. The refinance index jumped 43%, while the purchase index climbed 16%. Purchase activity rose to its highest level since October 2009.

The refinance share of mortgage activity accounted for 62.9% of applications.

"The recent decline in mortgage rates led to a surge in applications in the first full week of 2020," said Bob Broeksmit, association president and chief executive officer. "The purchase index reading hit its highest level in over a decade ... and mortgage lenders across the country are reporting that demand is strong. Low rates and steady job creation are encouraging borrowers to act."

The association also released its mortgage credit availability index this week that showed credit availability decreased in December. The index fell 3.5% to 182.2 last month. A decline in the index indicates lending standards are tightening, while an increase signals they are loosening.

"Credit availability fell in December after three months of expansion, driven by drops in both conventional and government supply," Joel Kan, a Mortgage Bankers Association economist, said in a statement. "Perhaps most noteworthy was a 6% drop in government credit supply because of changes to the Veterans Administration loan program, which eliminated loan limits for certain borrowers as of Jan 1, 2020. This likely prompted many investors to remove VA programs in high-cost counties from their offerings. There was also a reduction in streamline refinance programs, as slightly higher rates slowed the refinance market at the end of 2019."

Information for this article was contributed by staff members of The Associated Press and by Kathy Orton of The Washington Post.