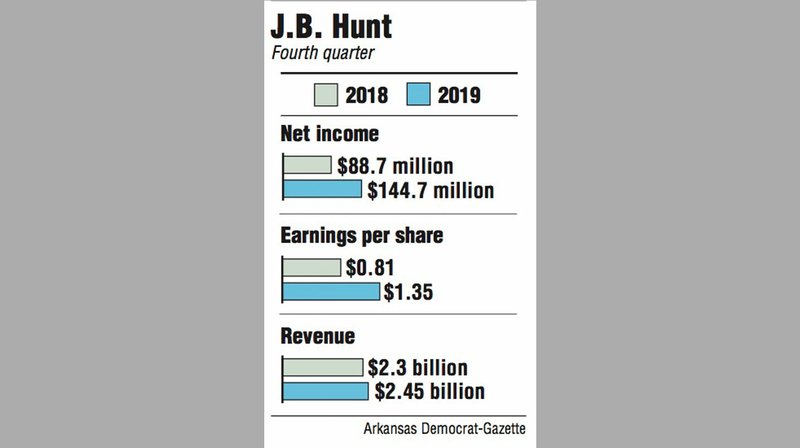 J.B. Hunt reported net income of $144.7 million, or $1.35 per share, compared with $88.7 million, or 81 cents per share, a year ago. The large discrepancy came from a pre-tax charge of $134 million for contingency liabilities related to an arbitration with partner BNSF Railway Co. in 2018.

Revenue was $2.45 billion, up 6% from $2.3 billion, with some of the growth coming from J.B. Hunt's acquisition of Cory 1st Choice Home Delivery, a final mile provider.

In a morning conference call, John Roberts III, J.B. Hunt's president and chief executive officer, said the financial data between 2018 and 2019 is "rather noisy" because of several one-time charges. "Even still we see the results for the year as confirming our ongoing portfolio approach to the markets we serve," Roberts said.

A key to the company's success in the three months ending Dec. 31 came from Dedicated Contract Services, J.B. Hunt's outsourcing business that offers fleet services to customers. Segment revenue grew 20% to $717 million. Operating income was $79.6 million, up 34% from $59.4 million a year ago.

Built into the outsourcing results is J.B. Hunt's final mile business, which is growing with each acquisition. The Lowell-based carrier agreed to buy RDI Last Mile last month and earlier bought Cory 1st Home Delivery, which is responsible for $59 million in revenue growth logged in J.B. Hunt's fourth quarter.

Roberts said the Intermodal, or rail freight, business continued to grow through the second half of 2019, despite cost headwinds and utilization challenges that remain.

The company reported that increased volumes were offset during the quarter by rail service interruptions, including a derailment in Southern California, and increased costs to attract and retain drivers.

Despite the earnings growth, the results fell short of Wall Street estimates. According to a FactSet consensus, analysts expected fourth quarter earnings per share of $1.50. The earnings also missed Stephens Inc.'s estimate of $1.46.

In a research note, analyst Justin Long said Stephens had heard whispers of rail struggles and increased technology investments eating into earnings, but "the magnitude was much greater than we expected."

Long wrote, however, that J.B. Hunt is well positioned for the long term and should benefit from improved intermodal volumes in the coming months and continued strength in the company's outsourcing business. Stephens also lowered its earnings per share estimate for J.B. Hunt's fiscal 2020.

J.B. Hunt's Integrated Capacity Solutions, or brokerage and logistics firm, was not profitable for the period. The segment posted revenue of $377 million, up 9% from a year earlier, with $225 million of that generated through J.B. Hunt 360, a marketplace mobile app. The company reported an operating loss of $11.8 million, down from a profit of $16.1 million a year ago. The segment underperformed during a time of increased costs related to digital marketing and advertising, personnel and expanding the functionality and performance of J.B. Hunt 360.

We will "continue to monitor the pricing cycle challenges presented through the fourth quarter" and work through current bids, Roberts said of the brokerage and logistics business. He also said trucking fared well given the conditions of 2019.

"I expect this year to both reveal and confirm our strategy in executing on our base businesses while we expand our presence within our growth channels," Roberts said of fiscal 2020. He also said J.B. Hunt will break out its final mile business from Dedicated Contract Services in its next quarterly report.