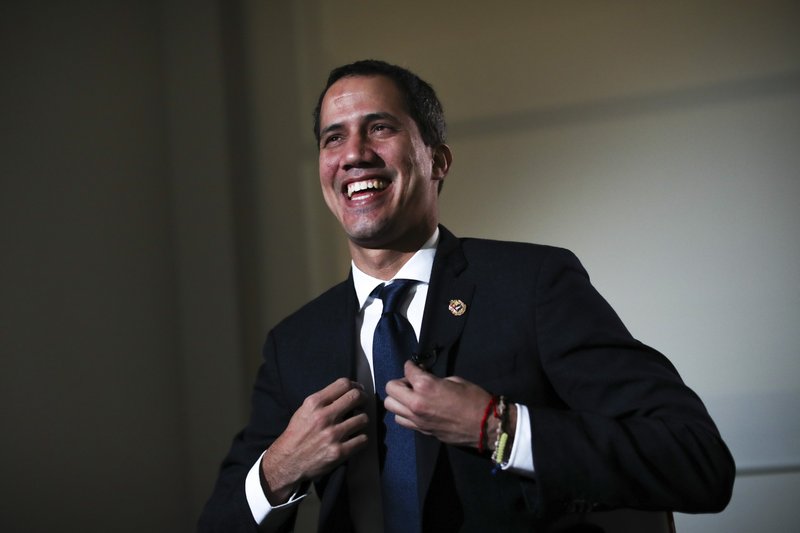 BRUSSELS -- Venezuela's opposition leader said Wednesday that he wants the European Union to broaden sanctions against members of the Venezuelan government as a way to push toward free presidential elections in the country.

Speaking in Brussels during a global tour that defied a yearlong travel ban at home and sought allies' support to oust Venezuelan President Nicolas Maduro, Juan Guaido also told The Associated Press that he is seeking a meeting with President Donald Trump in Washington.

"We are making all efforts to align as many agendas as possible," he said in an interview. "We don't rule it out. We are looking for a space."

Guaido just missed an opportunity to meet the president in Europe. Trump was at the economic forum in the Swiss mountain resort of Davos on Tuesday and Wednesday, where the Venezuelan politician has a scheduled appearance today before he continues what he called an "intense agenda" that could also take him to France and Spain.

A year ago, Trump's administration rushed to throw its support behind Guaido, the speaker of the opposition-controlled National Assembly, recognizing him as the country's legitimate president.

About 60 nations have also backed him, contending that Maduro's 2018 reelection was invalid and marred by fraud. Guaido, however, has been unable to remove the Venezuelan president from power. Maduro controls key government institutions, the Supreme Court, the electoral board and the military.

Despite the setbacks, including a failed call for a military uprising last April, the Venezuelan opposition has continued to increase pressure on Maduro. This week, Guaido's team is pushing hard to secure appearances with foreign heads of government, like he did on Tuesday with British Prime Minister Boris Johnson.

Spain's new, left-wing government has said that Guaido is welcome to visit the country, which hosts a large community of Venezuelans, but that he would be received by the foreign minister, not Prime Minister Pedro Sanchez.

That has been read as the influence that the anti-austerity Podemos party wields in Sanchez's new coalition Cabinet. Podemos' founder Pablo Iglesias, now a deputy prime minister, once criticized the Spanish government for backing Guaido, saying that the Venezuelan opposition leader sought a coup d'etat with U.S. intervention and a "bloodbath" in the Latin American country.

The 36-year-old opposition leader also wants Europe to ban the trading of Venezuelan gold mined from the country's southern jungles, what he calls "blood gold" responsible for damage in the environment and local communities. The metal has increasingly become a source of revenue there.

And after the EU pledged last year to stiffen the bloc's sanctions against Venezuelan individuals if the now-defunct talks hosted by Norway to reach a negotiated solution to the country's seven-year-long crisis failed, Guaido said the moment had arrived.

"Dictatorships and dictators need to know that there are sanctions, that there is a responsibility and that they can't laugh at the world," he said.

Guaido also lamented the raid of his Caracas office on Tuesday night by Venezuela's powerful intelligence police unit, as well as the disappearance of Ismael Leon, a deputy in the National Assembly who the opposition said was taken by security forces.

"Without any doubt, I'm going back," he answered when asked whether he feared reprisals or detention. "I am the interim president of Venezuela and we are going to work from Caracas, despite the risk that it carries."