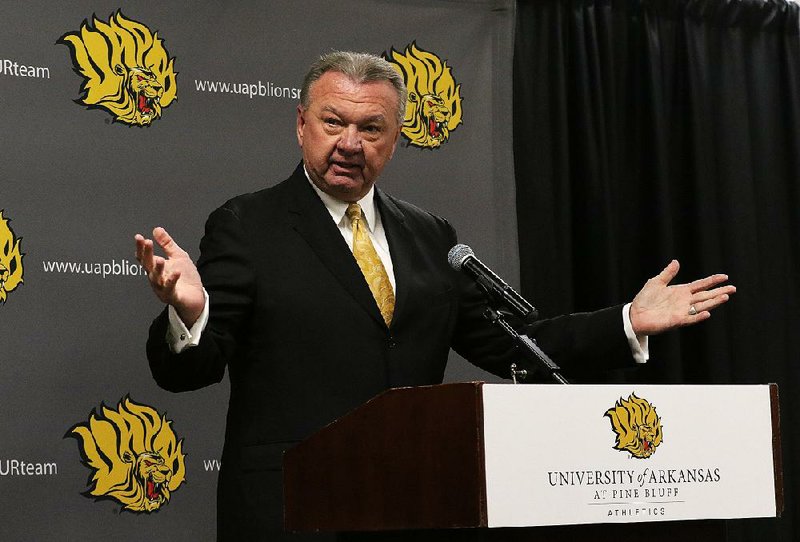 Chris Peterson speaks Wednesday during a news conference announcing him as the new athletic director at the University of Arkansas-Pine Bluff. Peterson was previously UALR’s athletic director in 2000-14. See more photos at arkansasonline.com/123uapb. (Arkansas Democrat-Gazette/Thomas Metthe)

PINE BLUFF -- Tunes from the University of Arkansas-Pine Bluff's marching band echoed through the halls of the school's STEM building Wednesday afternoon.

Those who had filed into a large first-floor conference room were serenaded as if it were a pep rally for a Saturday football game.

And then, in a matter of seconds, UAPB Chancellor Laurence B. Alexander emerged from the back of the room, with his new athletic director, Chris Peterson, trailing behind him.

[Video not showing up above? Click here to watch » https://www.youtube.com/watch?v=JkT_fI5T8To]

"Let's hear it for the baddest band in the land," Alexander shouted as soon as he took the stage.

Alexander soon turned his focus to the reason why they were all there, as Peterson was formally introduced as the new leader of the Golden Lions' athletic department.

"We were looking for someone who could be the total package of an athletics director, who could bring the academic aspect to it, the compliance, the management of coaches and of individual sports," Alexander later told reporters. "We wanted somebody who could be a fundraiser, who could build community relations and community partnerships, and really, really work on our relationship with our alumni -- and what I can truly say is that Chris checks every box."

Peterson replaces Melvin Hines, who was fired as the school's athletic director Sept. 18 for undisclosed reasons after being on the job for a little more than a year. Alexander declined comment Wednesday when asked about what led to Hines' firing.

Contract details for Peterson have not been released by UAPB.

But it was an infamous "hot mic" incident at a UALR sporting event that left a black mark on his tenure and ultimately led to his departure.

During an Aug. 22, 2014, home women's soccer game against Chicago State, Peterson was caught making lewd remarks to other staff members in the press box about the appearance of a UALR player's mother. His comments were heard during the live online video stream of the game.

Peterson resigned from the school less than two weeks later on Sept. 2, but he didn't provide a reason at the time for his departure.

"I made a very off-color remark in what was perceived as a private situation," Peterson told reporters Wednesday. "It became a national comment, and it cost me my job.

"It's something I regret, but I've gotten over it. I've moved on. Taking this position today, and being part of this institution, it ended up being a great situation."

Alexander said that incident was addressed with Peterson during the interview process.

"He was very contrite and very sincere and genuine in his approach to it," Alexander said. "I'm a person who forgives, and I would encourage others to take a second look."

Since his exit at UALR, Peterson, who's stayed in Little Rock, has been coaching high school football.

"Spent the last four years on a football field coaching high school kids, and I got to tell you," Peterson said, "it was tough to leave it."

Keith McCluney, UAPB's executive senior associate athletic director, stepped in as interim athletic director for three months after Hines' ousting before leaving for another job at a different school. Elbert Bennett, the school's vice chancellor for student affairs, assumed the interim role for the past month.

Alexander said UAPB did not utilize an outside search firm, like it previously had done to hire Hines, opting to rely on a delegated internal committee. UAPB whittled its candidate pool to four people before deciding on Peterson, Alexander said.

Peterson credits notable UAPB alums Stephen Broughton, a member of the UA board of trustees, and Jesse Mason, a longtime UALR administrator, as supportive figures who steered him toward UAPB.

"I just want to have an impact," Peterson said. "The bottom line, it's all about getting your young people to get a degree and get a job."

Alexander believes UAPB athletics is on the rise, citing increased graduation rates over the past few years; multiple facility enhancements, including to the football stadium and baseball facilities; and growing community support.

"The thing that we want to do is keep this department moving upward," Alexander said. "We're on a roll as it relates to our partnerships with the community, and we want to build on that momentum so that we can have that kind of support in all of our sports for the benefit of all of our student-athletes."