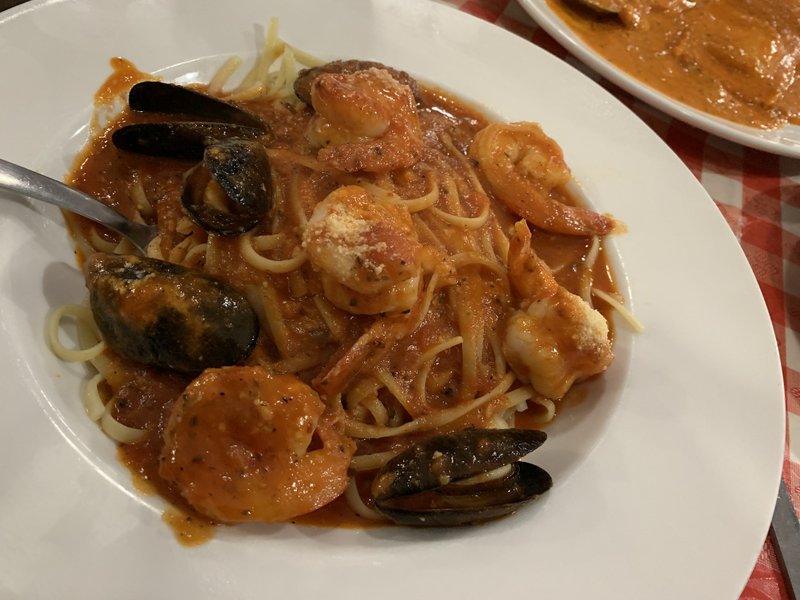 The marinara-based sauce is a bit spicier for the Mussels and Shrimp Fra-diavolo at Milano's Italian Grill in west Little Rock. (Arkansas Democrat-Gazette/Eric E. Harrison)

A couple of weeks ago a friend was lamenting how scant this market is of decent, locally owned Italian restaurants.

Count 'em on one hand — and with apologies to anybody we inadvertently didn't count: Bruno's Little Italy. Ciao. Ristorante Capeo. Cafe Prego. Bravo Cucina Italiana. Zaffino's in Sherwood. To make a half-dozen, add Graffiti's, a Mediterranean hybrid with a primarily Italian accent.

Now add Milano's Italian Grill, perched near Little Rock's western edge, an offshoot of Conway's Verona Italian Restaurant, next-door to the westernmost branch of Casa Manana in what for some years was a pizzeria and which most recently had housed an outlet of Layla's Gyros & Pizza. (An erstwhile sibling in Maumelle we praised just under a year ago has recently come under new ownership.)

The New York family who runs it explains on the restaurant's website that it serves "authentic Italian cuisine at affordable prices ... by making all of our own sauces, breads, baked pastas and specialty dishes from scratch."

We can verify the house-made nature and enjoyability of most of what we got at Milano's, enough to recommend including it in the area's Italian restaurant pantheon.

The restaurant divides into large front and small back dining rooms, the mirror behind the bar area making the latter appear to be twice the size. Walls are of brown-painted stucco and faux brick, with the ubiquitous Italian-restaurant red-and-white-check plasticized tablecloths on sturdy tables with sturdy, slightly movement-resistant chairs.

Reservations: Yes except on Fridays and Saturdays

Stylized images from world capitals hang at specified distances from one another including the Colosseum in Rome, the Houses of Parliament and Big Ben in London and scenes from New York and Paris. We couldn't hear what, if anything, came over the sound system when the place was busy on a weekend night; the soundtrack on a quieter Sunday evening visit was heavy and appropriately into Sinatra.

Milano's has a surprisingly extensive menu, ranging from simpler pasta and baked-pasta entrees and a big spread of house, chef's and "new" specials in red, white, pink and wine-based sauces. We found ourselves eyeing with regret plates on other tables — for example, a neighboring diner praised her Chicken Modo Mio ($11.99 lunch, $15.99), with fresh spinach, broccoli and tomatoes in a white wine cream sauce, served over spaghetti.

Portions are somewhere at the upper end of the range that starts at "generous" and proceeds through "enormous" to "outrageous." The amount of sauce in all our sauced dishes was more than enough to leave room for sopping up with the fresh house-made knot rolls that come with all meals.

We found satisfaction nonetheless staying a little more toward the middle of the road, including the fine but filling Garlic Cheese Bread appetizer ($3.99), the house-made crusty focaccia bread topped with garlic and a thick layer of melted mozzarella, served with a pourable vessel of chunky marinara sauce for dipping or spreading.

The Italian Sausage ($7.99) consisted of thin-sliced sausage sauteed with garlic, basil and white wine in a sea of spicy marinara sauce. The sausage was mildly spiced but between perhaps a slight bit of overcooking and slicing it thin, it was on the soft side, and we prefer our sausage with a little more "chew."

We can certainly endorse the Mussels Marinara ($10.99), a dozen moderately sized shellfish in a spicy marinara broth.

And we can endorse the Mussels & Shrimp Fra-diavolo ($19.99), a "new" special, five mussels and five Shrimp in a mildly spicy marinara sauce — with just enough kick to recognize the red pepper — with onions, garlic and basil served over linguine. The pasta was nearly al dente — "firm to the tooth," the ideal for pasta. Our one quibble: The shrimp came with tails on, which, when there's sauce involved, guarantees either that you're going to eat the tail shells or get your hands saucy — and you only get the one paper-towel-style napkin with the silverware setup.

We also enjoyed our Lobster Ravioli ($19.99), a chef's special, a quartet of large, firm pasta pockets stuffed with lobster and awash in pink sauce — a piquant blend of marinara and Alfredo.

Our Veal Marsala ($20.99) was a bit of a mixed bag. One of the two large flour-fried scallops of veal was tender, the other a little bit rubbery. There was plenty of flavor, though we had a hard time establishing that it came from the sweet Marsala the menu promised. The dish included plenty of fresh mushroom bits well soaked in the sauce. Where the dish fell short was in the spaghetti, on the wrong side of the fine line between al dente and "chewy," possibly just a little undercooked and, alas, lacking flavor.

Entrees come with a choice of soup or salad. The latter was a small flat plate of mostly iceberg lettuce, torn rather than chopped, topped with kitchen-chopped purple onion and tomatoes, with a small plastic cup of the house dressing — what appeared to be a commercial Italian.

Both our soups were disappointing. The tomato basil, which our server, who said she didn't usually like tomato soup, recommended, was thin and a little acerbic, almost vinegary, and lacking in either tomato or basil flavors. The minestrone, also thin, was a little better by virtue of having minestrone ingredients (navy beans, bits of pasta and vegetables), but not by much. Spooning in some of the leftover marinara from the sausage appetizer and adding about half the grated parmesan from the on-table jar helped but wasn't enough to really save it.

Service was good on both visits and we felt well taken care of.