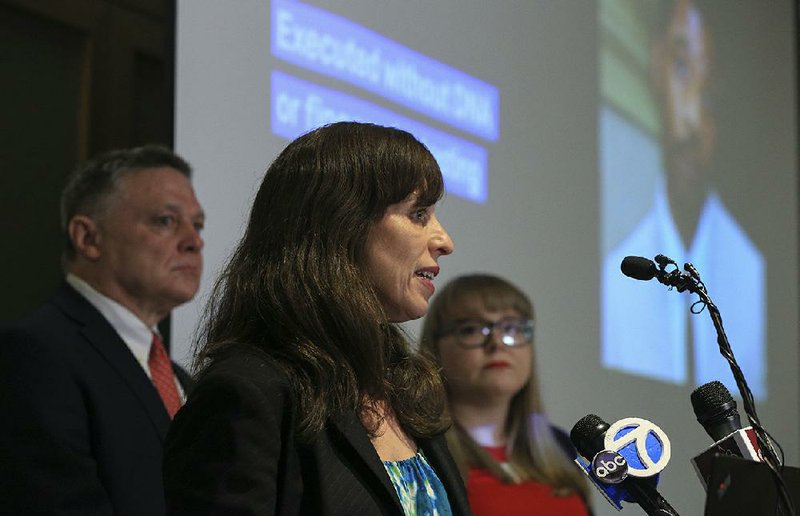 Nina Morrison (center), an attorney with the Innocence Project, said Thursday in Little Rock that “the questions about Ledell Lee’s guilt are so strong and the process through which he was executed was so rushed and manifestly unfair.” At left is Little Rock attorney John Tull, a Freedom of Information Act expert. (Arkansas Democrat-Gazette/Staton Breidenthal)

The execution of an Arkansas man in 2017 has not put to rest his family's efforts to prove his innocence, according to a team of attorneys who on Thursday filed a lawsuit seeking to force the Jacksonville Police Department to turn over evidence for DNA testing.

Ledell Lee, who was put to death for the 1993 murder of Debra Reese, proclaimed his innocence throughout his decades-long appeals and continued to do so on the day of his execution. Prosecutors have been similarly steadfast in their belief in Lee's guilt, pointing to multiple eyewitnesses who reported seeing Lee near Reese's house on the morning of the murder.

All of Lee's appeals during his lifetime were unsuccessful, however, and on April 20, 2017, he became the first state prisoner to be executed in more than a decade.

In a complaint filed with Pulaski County Circuit Court on Thursday, attorneys with the Innocence Project, American Civil Liberties Union and local firms argued that DNA evidence and fingerprints collected at the Reese home should be turned over for testing.

[Video not showing up above? Click here to watch » https://www.youtube.com/watch?v=H8RBZ6I0ASE]

"We simply want to know the truth," said Patricia Young, Lee's sister who is a plaintiff in the lawsuit. Young appeared at a news conference Thursday to announce the lawsuit.

"When Ledell Lee was alive, he wanted DNA tests to prove his innocence," Young said. "Now that he's been executed, there's no reason we should have to live the rest of our lives without knowing for certain who committed this crime."

Nina Morrison, an attorney with the Innocence Project, said Lee's case is one of two that the organization has taken on involving a prisoner who has already been executed. The other case, that of convicted murderer Sedley Alley, was denied retesting by a Tennessee judge last year. It is on appeal.

"We very rarely do it," Morrison said. "We have thousands of people who are writing to us from around the country on death row and in prisons who are alive and need our services. But in this case, the questions about Ledell Lee's guilt are so strong and the process through which he was executed was so rushed and manifestly unfair."

The lawsuit names the city of Jacksonville and its Police Department as defendants. The suit seeks to have evidence -- such as fingernail clippings and clothing from Reese's body and a hair found at the scene -- turned over for DNA testing under Arkansas' public records laws.

Jacksonville City Attorney Stephanie Friedman said in response to the lawsuit that Arkansas' Freedom of Information Act does not apply to the kinds of evidence that Lee's sister is seeking.

"Lee's DNA physical evidence is not a public record and is not open to public inspection," Friedman said in an email to the Jacksonville mayor and City Council members. "Additionally, should the City release this evidence, there is the possibility that the evidence would be destroyed, further violating evidence retention laws."

John Tull, a Freedom of Information Act expert and attorney with the Little Rock firm of Quattlebaum, Grooms and Tull, joined the team of criminal defense attorneys representing Young in seeking the records from Jacksonville.

"The [FOI] act itself references data. It's not limited to just documents," Tull said Thursday. "So the data we're seeking, that's what DNA is, it's data."

The Innocence Project on Thursday committed to pay for any testing of DNA or fingerprint evidence turned over by the city.

The case has yet to be assigned to a judge in the 6th Judicial Circuit. The judge would set hearing dates.

Lee's first trial for Reese's murder ended with a hung jury, but at a second trial in 1995, he was convicted and sentenced to death. The complaint filed Thursday questioned the effectiveness of Lee's attorneys in his second trial, and included a letter from Lee's longtime appellate attorney, in which the attorney admitted that he was battling substance abuse in the years he represented Lee and had failed to seek DNA testing of evidence.

Young, Lee's sister, repeated Thursday the contention of several of Lee's family members who have said they were with Lee the morning of Reese's murder.

"If my brother was innocent, that means the killer has gone free," she said.

The complaint also included affidavits from experts who argued that other forensic evidence used to convict Lee -- specifically a shoe print at the scene -- had been shoddily tested before his 1995 trial.

According to court records, prosecutors relied heavily on the eyewitness testimony of several of Reese's neighbors, who said they had seen Lee walking around the neighborhood the morning Reese was killed. Investigators also said that a $100 bill found in the cash register of a business Lee stopped at later that day had a serial number close to several bills Reese's father had given his daughter before the murder.

While police were unable to link Lee's DNA to the crime scene at Reese's home, his arrest a few hours after the murder did allow police to link his DNA to three previously unsolved rapes and one homicide, according to court records. At the time of his execution, Lee was also serving a prison sentence for two of the rapes, while prosecutors had dropped the other charges after his death sentence.

Members of Reese's family could not be reached for comment Thursday. At a 2017 clemency hearing, her father had expressed a desire to see Lee's punishment carried out.

Lee's execution in April 2017 at the Cummins prison unit kicked off a series of four lethal injections carried out over a two-week period that attracted international attention and scrutiny to Arkansas' execution protocol. Gov. Asa Hutchinson had originally scheduled eight executions that month as the state faced the expiration date of one of the drugs used in executions.

Four of the executions were eventually halted by the courts, and Arkansas has not carried out an execution since.

Stacey Johnson, another inmate who was scheduled to be put to death on the same day as Lee, recently lost an appeal in December to have new DNA testing done on evidence from his case. 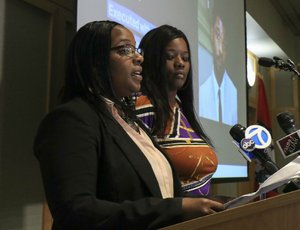 “We simply want to know the truth,” Patricia Young, Ledell Lee’s sister, said Thursday at a news conference announcing a lawsuit seeking evidence in the murder case that led to Lee’s execution. At right is another sister, Shantel Tidwell. (Arkansas Democrat-Gazette/Staton Breidenthal)