Markquis Nowell scored a game-high 22 points on 7-of-17 shooting from the floor, including 5 three-pointers, to lead four University of Arkansas at Little Rock players with 10 or more points in a victory over South Alabama on Saturday at the Mitchell Center in Mobile, Ala.

McGee, Trhae Mitchell and Josh Ajayi all had 17 points to lead the Jaguars.

The Red Wolves jumped out to a 13-5 lead, but the Trojans pulled within 16-12. Troy then went cold from the floor, not hitting a shot in over six minutes as Arkansas State went on a 15-2 run to lead 31-14 with 5:52 left in the first half. The Trojans outscored the Red Wolves 11-6 the rest of the half, but ASU led 37-25 at halftime, its largest halftime lead of the season.

"From the get-go, I thought we had a great bounce in our step, especially defensively," ASU Coach Mike Balado said in a news release. "Our defensive effort was pretty impressive over the first 10 minutes, and we took great shots on offense. Our guys shared the ball well, and I thought this was our most complete game we've played this year."

Melo Eggleston scored 15 points to lead Arkansas State, which now has sole possession of third place in the Sun Belt Conference standings. Jerry Johnson had 12 points and Christian Willis added 11 for the Red Wolves. Khalyl Waters had 15 points to lead Troy, while Ty Gordon poured in 14 and Tahj Small chipped in with 11.

Payten Ricks hit a jumper with three seconds remaining in overtime to give Abilene Christian (11-8, 6-2 Southland Conference) a victory over the University of Central Arkansas (5-15, 4-5) on Saturday at the Farris Center in Conway.

Ricks forced the game to go into overtime after being fouled by Eddy Kayouloud and hitting three free throws with one second left in regulation to tie the game at 62-62. UCA had held a nine-point lead with 7:23 left in regulation following a Rylan Bergersen three-pointer. The Panthers led for much of overtime, but a three-pointer by Aaron Weidenaar with 15 seconds left gave the Bears a 69-68 lead before Ricks' jumper sealed the victory for Abilene Christian. 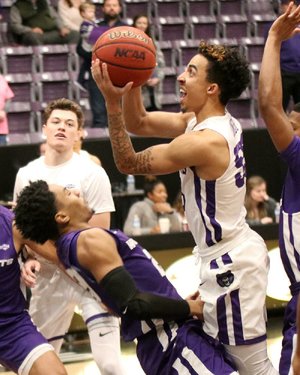 UCA’s DeAndre Jones (right) looks to put up a shot while an Abilene Christian defender tries to draw a charging call Saturday during the Bears’ 70-69 overtime loss to the Panthers at the Farris Center in Conway. Jones finished with 14 points. (Photo courtesy University of Central Arkansas)

UCA outscored Abilene Christian 24-18 in the lane and held a 48-30 rebounding advantage, but the Bears committed 22 turnovers, which the Panthers converted into 23 points. UCA also blocked 11 shots and got 28 points off the bench.

The University of Arkansas at Pine Bluff (3-15, 2-4 Southwestern Athletic Conference) was undone by rebounding and turnovers in a loss to Prairie View A&M (9-10, 5-1) on Saturday in Prairie View, Texas.

Marquell Carter led UAPB with 12 points and eight rebounds. Darius Williams scored a game-high 22 points to lead Prairie View A&M on 8-of-14 shooting from the floor, while Gerard Andrus added 11.

The Red Wolves held a 53-45 lead with 5:05 remaining after Peyton Martin hit two free throws, but the Chanticleers used a 9-1 run over the next 2:35 to tie the game at 54-54 with 2:30 left after Caitlin Roche hit a three-pointer. Jada Ford countered with a four-point play, giving ASU a 58-54 lead. But Zacharyia Esmon countered with a three-pointer to cut the lead to 58-57 with 1:58 remaining. Peyton Martin hit a layup and a free throw for a three-point play to push the lead to 61-57, but a jumper and a layup from Aja Blount tied the game at 61-61 with 21 seconds left. Washington's game-winner came off her own miss as time wound down.

Washington finished with 20 points on 7-of-16 shooting from the floor, and Mya Love added 15 points for Arkansas State. Naheria Hamilton led Coastal Carolina with 14 points, Blount finished with 12 and Roche had 11.

Already leading 15-13 after the first quarter, Abilene Christian outscored the University of Central Arkansas 21-9 in the second quarter to help the Lady Wildcats earn a victory at the Farris Center in Conway.

UCA improved in the second half, shooting 54.8% (17 of 31) from the floor while outscoring Abilene Christian 42-38. While the Sugar Bears were outrebounded 33-31, they held a 15-8 edge on the offensive glass, outscored the Lady Wildcats 34-22 in the lane and turned 17 Abilene Christian turnovers into 22 points. UCA also got 19 points off the bench.

Taylor Sells led the Sugar Bears with 22 points on 10-of-14 shooting from the floor, while Briana Trigg added 15 points and Hannah Langhi chipped in with 10. Breanna Wright scored a game-high 31 points to lead Abilene Christian and Alyssa Adams poured in 16.

Kyeonia Harris scored 16 points on 4-of-9 shooting from the floor to lead the University of Arkansas at Pine Bluff (3-13, 2-4 Southwestern Athletic Conference) in a loss to Prairie View A&M (5-13, 2-4) in Prairie View, Texas.

Nissa Sam-Grant had 10 points, including six from the free-throw line, for UAPB. Bernesha Peters and Ke'Asia Williams scored 13 points each to lead Prairie View A&M.