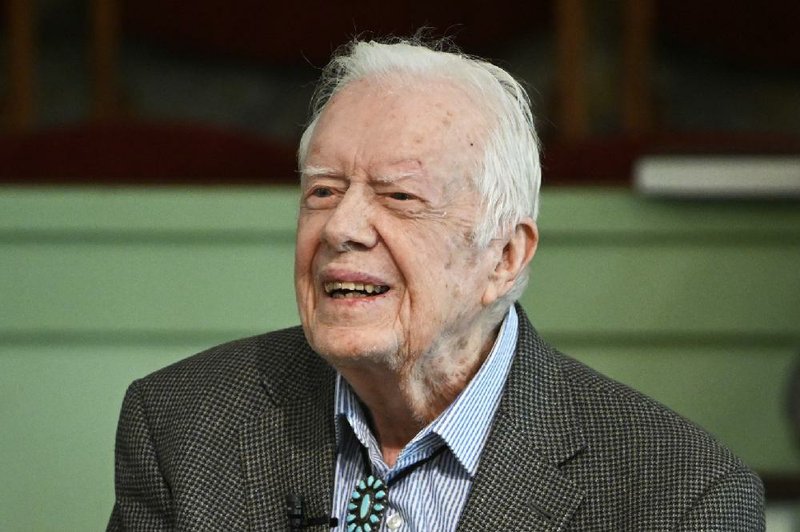 Former President Jimmy Carter last taught his Sunday School class at Maranatha Baptist Church in Plains, Ga., in early November, just before he was admitted to a hospital for surgery to relieve pressure on his brain. (AP/John Amis)

Every now and then, Sunday school teacher Kim Fuller makes a point during class and the old man sitting on the front pew raises his eyebrows quizzically.

That man is her uncle, former President Jimmy Carter -- and Fuller's unique challenge is to serve as his substitute in the class he usually teaches himself.

Fuller is the eldest daughter of Carter's late brother, Billy Carter, and she has served as the regular replacement for the world's best-known Sunday school teacher since Carter underwent brain surgery in November.

Out of the hospital and back home in Plains, Ga., the 95-year-old Carter has been in his regular, front-row seat at Maranatha Baptist Church, along with his wife, Rosalynn, each Sunday since Dec. 29. They sometimes sip coffee during class or hold hands, and they still pose for photos with visitors when able.

It's unclear when or if the nation's oldest former president, a committed Baptist and longtime Sunday school teacher, will return to leading his Bible class, which has drawn huge crowds to Plains in recent years. But in the meantime, Fuller has taken on the task of leading the class, often with her famous uncle in attendance.

"It can be intimidating," she said in an interview Thursday.

Carter sometimes points out an errant statement privately after class, said Fuller, and he also serves as sort of a real-time fact-checker during the sessions. She said she appreciates his input.

"He's good. I'll look at him and say, 'Am I getting that right or pronouncing it correctly?' He always tells me," said Fuller, 63. "It's family. He knows how I teach."

Maranatha Baptist has roughly 30 members, but as many as 450 people attend on any Sunday when Carter teaches. His schedule is posted online, and Fuller said few people ever show up expecting to hear Carter and getting her instead.

Fuller uses the same resource material as Carter -- this week she plans to teach about the apostle Paul and his messages from prison -- but she lacks the former president's experience of traveling the world and seeing many biblical sites firsthand.

"He probably studies his lesson all week long, and I do, too. But he doesn't need to use the commentaries, and I do," said Fuller, who has helped out as Carter's periodic substitute for about three years.

Carter last taught the class in early November. He was admitted to the hospital Nov. 11 for surgery to relieve pressure on his brain caused by bleeding after recent falls, and he was readmitted a couple weeks later for treatment of a urinary tract infection.

Church members prayed for Carter and his wife of more than 70 years when they first returned to worship after the health scares. Carter's niece said he seems to be doing well.