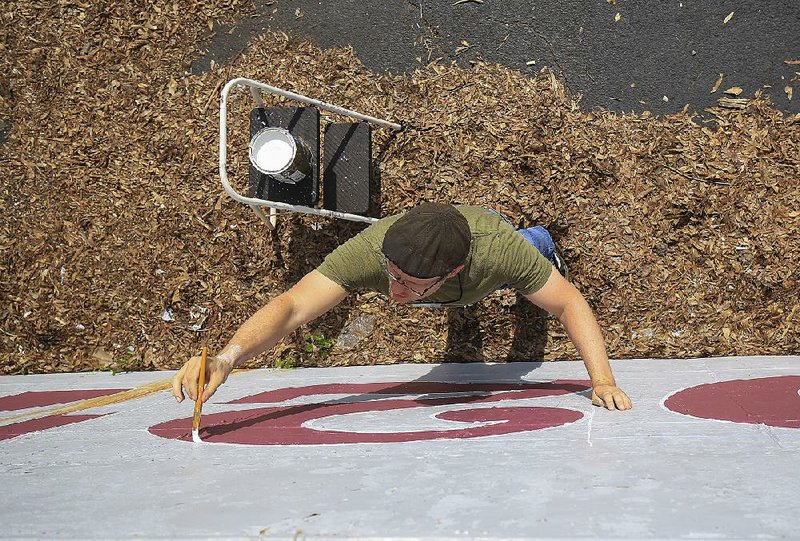 North Little Rock will undertake a downtown mural project this year, joining the growing list of Arkansas cities that are trying to reinvent themselves through the art of wall painting.

The city’s beautification commission, City Beautiful of North Little Rock, has approved an $11,779 grant application from John Gaudin as part of a mural project planned for the Argenta Arts District.

“It’s going to engage more people and it’s going to be fun,” said Gayle Fisher, chairman of the committee that provides matching grant support for beautification efforts such as artwork or landscaping in the city. “It’s an arts community in downtown, and there is a lot of room for improvement.”

The project’s aim is to reflect the arts district’s characteristics through multiple murals.

“This project will be another attribute that continues to make downtown North Little Rock a special place where people want to live, work and play,” Mayor Joe Smith said in an email.

Gaudin said the mural project will be maintained by the nonprofit Potluck and Poison Ivy, an artist cooperative in North Little Rock. He said money from the city’s beautification commission will be used to clean the buildings and prepare them for murals.

“Getting murals in North Little Rock has been on my radar, but we are in a very historic area,” said Gaudin, who is also on the board of the Mid American Arts Alliance, a regional nonprofit. “Right now we are in the middle of a large public works project, and this seemed like the right time.”

Gaudin said sites for the murals are under consideration, but he wasn’t ready to reveal the locations because proposals have not been finalized.

North Little Rock is one of several cities across the state that are embracing the downtown mural trend, including Little Rock, Fayetteville and Fort Smith.

OTHER CITIES, OTHER WALLS

Public art has long been an interest of the Downtown Little Rock Partnership, said Ellen Lampe, director of communications for the organization, but the efforts of the group’s Public Spaces Committee helped bring the idea to fruition in 2019 with three new murals unveiled.

The partnership is also experimenting with adding art in unexpected places, such as in alleys and other spots where art isn’t usually displayed.

“We’ve installed art on alley doors, and brought the community out to help us colorfully spray paint Baker’s Alley,” Lampe said. “As a result, we see people intentionally walking through the alley, taking photos there and viewing it through an entirely new lens, which is precisely the idea.”

Fort Smith has been aggressive in its pursuit of the arts and is considered by many as the premier spot for city murals in Arkansas, Gaudin said.

Much of the credit for that is a result of The Unexpected, an annual weeklong event produced by 64.6 Downtown. The nonprofit was founded in 2015 to spark creative artistry and focus on revitalization projects for the downtown area.

“The project was created to positively disrupt the climate in Fort Smith at the time,” said Claire Kolberg, director of The Unexpected. “This is a great way to capture attention while using beautification.”

Kolberg said murals are a great way to reinvigorate the space that residents occupy.

“It sparks imagination,” she said.

Mural Arts Philadelphia, the nation’s largest public arts program, has helped unite artists and communities for more than 35 years through a process rooted in mural-making. Mural Arts undertakes 50 to 100 public art projects each year, and maintains its growing collection through a restoration initiative.

Each year, 15,000 residents and visitors tour Mural Arts’ outdoor gallery, which has helped Philadelphia gain international recognition as the “City of Murals.” The organization has created around 5,000 works of public art.

“I think globally, muralism is popular right now,” said Jane Golden, founder and executive director of Mural Arts Philadelphia. “Many cities are using murals in connection with their revitalization efforts.”

Creating murals is a great multitasking tool that can be implemented by cities, Golden said.

“It is aesthetically pleasing, while also uplifting neighborhoods and sometimes giving voice to social issues,” she said,

Golden was hired as an artist in the 1980s by former Philadelphia Mayor Wilson Goode to address the city’s widespread graffiti issue. She said she was inspired by murals in Los Angeles and decided to use wall art locally.

Golden mentioned how artists and even entire neighborhoods in Philadelphia were able to rise above their situation and create something beautiful.

Golden said she has used murals and art over the past decades to get involved in youth education, behavioral health and criminal justice as well as launching the knowledge-sharing Mural Arts Institute in 2017.

“Murals provide great joy for onlookers, and it sparks economic development,” she said. “It always feels good when you are walking around and seeing people taking photos. It’s mutually beneficial with the restaurants and shops downtown as well.”

The ability to instantly share photos of art using cellphone apps such as Instagram has allowed a traditionally Old West town like Fort Smith to also be an arts hub.

“We now have natural global connections because of sites like Instagram,” Kolberg said. “These photos help put Fort Smith on the map and provides us the opportunity to see what other cities are doing. We are sort of importing and exporting art using these kinds of devices.”

“Instagram is so visual and allows you to create an instant portfolio as an artist,” she said.