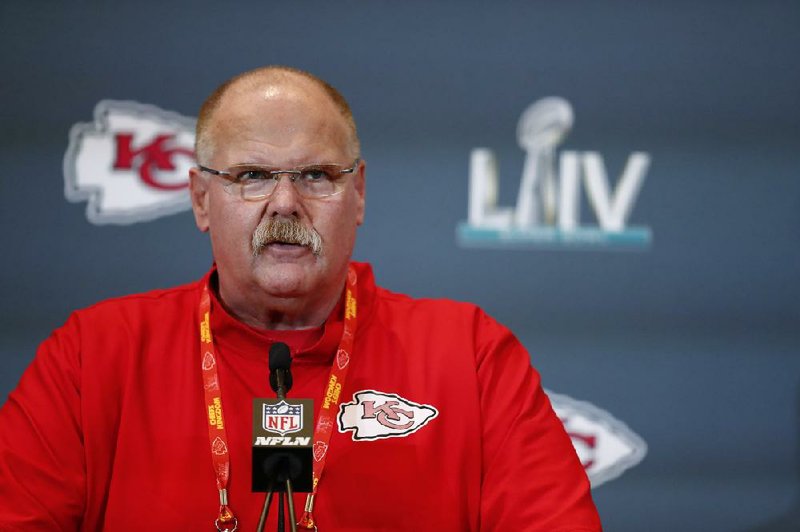 Kansas City Coach Andy Reid said the Chiefs are unique in that they don’t complain. “When they need to cut it loose and have fun, they cut it loose. But when they’re at practice, they’re all business,” Reid said. (AP/Brynn Anderson)

MIAMI -- If you're planning to walk through the middle of the Kansas City Chiefs locker room between lunch and afternoon practice, you might want to grab someone's shoulder pads and helmet to brace for impact.

There's a good chance you'll find yourself in the middle of a pickup basketball game involving 300-pound linemen.

It's a scene that plays out daily during the regular season, big bodies banging into each other as defensive tackles Chris Jones and Khalen Saunders try to post up under the hoop -- hung just over the doorway leading into the showers. Usually, teammates will gather around them, playing the dual role of vocal fans and even more vocal referees.

"When you check in, it's nonstop competition," Chiefs tight end Travis Kelce explained this week. "Guys are always trying to play some type of game or compete in some type of way to get the upper hand on somebody else."

The pickup games illustrate a few points about the Chiefs, who are preparing to play in their first Super Bowl in 50 years: They have a fierce competitive streak that permeates the entire roster, whether it's on the field or off; they genuinely like being around each other, even when they could leave during the lunch hour; and they have a loosey-goosey nature despite the high-stakes nature of professional football.

That last point could serve them well as they deal with a week of media engagements, countless parties and distractions, and ultimately the strain that comes with prepping for their big game against the San Francisco 49ers on Sunday.

"The unique thing about this group is that they don't complain about anything," Chiefs Coach Andy Reid said. "When they need to cut it loose and have fun, they cut it loose. But when they're at practice, they're all business."

It wasn't always that way.

Less than a decade ago, under the failed tenures of general manager Scott Pioli and coach Todd Haley, the feeling in the locker room on a random Wednesday during the season was downright oppressive. Smiles were few, laughter even more rare, and the stress and tension that the Chiefs seemed to carry with them was palpable.

Romeo Crennel tried to lighten the mood a bit during his only season in charge, but it's hard to be lighthearted in the midst of a 2-14 season marked by as much off-the-field turmoil as there were issues between the lines.

It wasn't until Reid showed up from Philadelphia that things changed. He gave his players broad freedom to express themselves, whether that meant the way they dressed or how they spent their free time. All Reid asked was that they stay out of trouble, set a good example and take care of business when it was time to get serious.

"There's a certain way we handle opportunities like this where we're in front of the media," Kelce said during the team's pre-practice availability Tuesday, "but he wants you to be yourself, and that's the best thing you can do in his position is let you be yourself, how you're most comfortable."

Kelce is one of the biggest characters on the team. He often wears outlandish outfits and his fashion sense is, to put it mildly, unique. But Kelce also exemplifies the almost uncanny way the Chiefs can flip a switch from silly to serious, as evidenced by his four consecutive 1,000-yard receiving seasons.

The Chiefs showed their appreciation for their coach -- and the way he treats them -- when they donned his trademark Hawaiian-style shirt for the trip to Miami. Other teams might deplane the week before the Super Bowl wearing suits and an all-business attitude, but the Chiefs bounced across the tarmac as if they were headed to Disney World.

"Coach is an awesome dude to play for. He is 100% in this whole thing with us," Chiefs left tackle Eric Fisher said. "A big part of why we're here is we want to succeed for him. He puts in so much work every day in making us successful, and making sure we do good. The least we can do is give him our all."

Reid has a natural habit of deflecting such plaudits, so it's no surprise that he pointed to the players as the reason the Chiefs are such a tight-knit group.

It starts with the quarterback, Patrick Mahomes, who often drags a handful of guys to college basketball games or concerts or myriad other events in Kansas City.

"When you get them all together," Reid said, "they all kind of feed off each other. That is kind of this age, this time of life, at this time, being 2020. This is how it has evolved since I came in the league. We were barely getting cellphones back then. Now, you give them a break so that they can be on the cellphone. It's a different world. 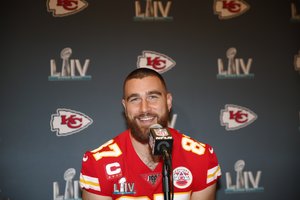