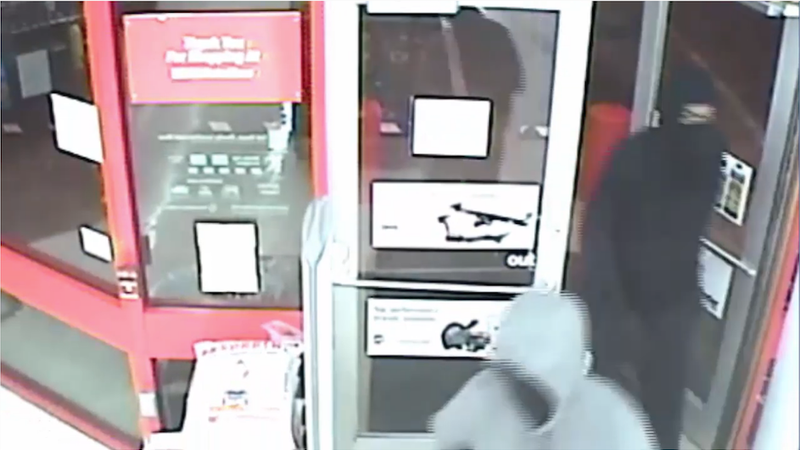 In a screenshot of surveillance video provided by North Little Rock police, two males enter the AutoZone store at 400 Camp Robinson Road before an armed robbery.

An auto parts store employee was pistol whipped and left bloodied during a robbery last week and North Little Rock police are seeking the public's help in capturing the two masked suspects.

Shortly after 9:30 p.m. Friday, three employees were inside the AutoZone store at 400 Camp Robinson Road when two armed suspects entered, according to a police report.

One of the suspects walked to the back of the store toward one of the employees, who was stocking shelves, and told him, "This is a robbery," North Little Rock police said.

After the employee turned around, the suspect struck him in the head with the handgun, causing him to fall to the floor and lose consciousness, the report stated.

Sgt. Amy Cooper, a police spokeswoman, said the armed suspect "continued to strike" the employee in the face and eventually took his wallet.

The employee was not seriously injured in the attack, but police said there was a "rather large pool of blood" on the floor where the employee had been lying, according to the report.

The other gunman stood at the front counter and ordered one of the employees to take cash out of the register, but the third employee ran out the store through the emergency exit, causing an alarm to sound, police said. The alarm caused both gunmen to panic and run away before getting any of the store's money, the report stated.

The report stated that both suspects were black males, between the ages of 17 and 22 and wearing dark face masks. One of the suspects appeared to be about 6 feet 3 inches tall and up to 220 pounds while the other, the one who was near the register, was about 5 feet 7 inches tall and 160 pounds, according to police.

Anyone with information is urged to call the North Little Rock police tipline at (501) 680-8439. Tipsters may remain anonymous and could be eligible for a reward if their information leads to an arrest and conviction.