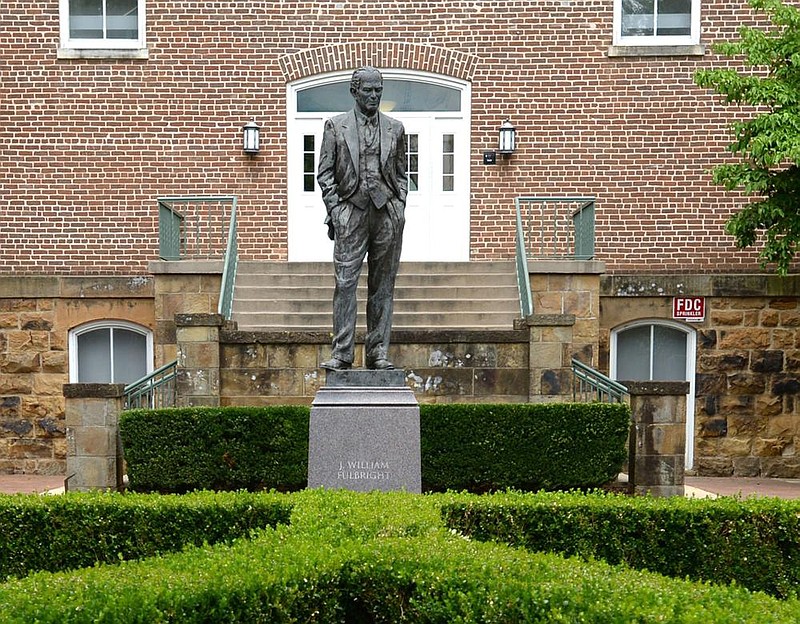 A statue of J. William Fulbright stands Wednesday near the west entrance of Old Main on the University of Arkansas, Fayetteville campus. The statue was dedicated in 2002. (NWA Democrat-Gazette/Andy Shupe)

FAYETTEVILLE -- Students and alumni are adding their names to a petition seeking the removal of a statue of J. William Fulbright from the University of Arkansas, Fayetteville campus.

The petition also asks that the former U.S. senator's name be removed from UA's arts and sciences college, which was renamed in 1981 in honor of Fulbright.

Black student leaders have criticized Fulbright's record on civil rights, doing so as part of a wave of recent social media posts about racial biases and inequity experienced on campus. Fulbright is perhaps best known today for introducing legislation in 1945 that created the international educational exchange program named after him.

The movement to reappraise the legacy of Fulbright -- described on UA's website as its "most well-known graduate" -- comes as colleges and universities nationally have in recent weeks made major changes on their campuses to acknowledge that prominent figures espoused racially charged views.

State senator Greg Leding, a Democrat from Fayetteville, in a social media post Tuesday said he supported the statue removal, and arts and sciences college renaming. Leding also said college campuses in Arkansas "should thoroughly review the legacies of all whose names appear on campus buildings, programs and elsewhere."

UA spokesman Mark Rushing said the university is aware of the petition, which as of Wednesday evening had more than 5,700 signatures. A group of UA students known as the Black Student Caucus has promoted the petition, and most signatures have come within the past 10 days or so, though the petition began about a year ago. The group did not respond Wednesday to an email seeking comment.

"We are having these very conversations on campus currently, not only with our student leaders, but also with our faculty and staff. We are expanding the campus dialogue in the coming days with the goal of establishing a plan to address the legacies as well as the tragedies of Arkansas history on our campus," Rushing said in an email.

Fulbright at age 34 became UA's president before going on to represent Arkansas, first in the U.S. House of Representatives and then for 30 years in the U.S. Senate.

Randall Woods, a distinguished professor of history at UA, said Fulbright was a segregationist.

"He signed the Southern Manifesto in 1956, a declaration by southern congressmen and senators promising a massive effort to obstruct the Brown decision," Woods said, referring to the U.S. Supreme Court's decision in the Brown v. Board of Education of Topeka case. The court ruled in 1954 against the racial segregation of public schools, stating that it was unconstitutional.

Woods said Fulbright -- devoted throughout his career to international issues -- failed to become secretary of state under President John F. Kennedy because of opposition from the NAACP.

"He was Jack Kennedy's pick to be secretary of state in 1961, but the NAACP vetoed that because of his record on civil rights," Woods said.

Fulbright, in a phone call to Bobby Kennedy, expressed anger over the bombing deaths of four Black children in 1963, Woods said.

But well into the 1960s, Fulbright voted against civil rights legislation and took part in a filibuster trying to defeat such an effort, Woods said.

"He claimed to me he had to choose between being an internationalist and a critic of the war in Vietnam, and being progressive on civil rights," said Woods, a biographer of Fulbright. "But I think he had a choice in the mid-60s. He was politically strong enough to support civil rights."

Fulbright died in 1995. Bill Clinton, at the time U.S. president, gave his eulogy.

The former senator spoke about how "it was just the prejudice of the times, of his constituents," Woods said. "But I think that he shared some of that prejudice."

Willy Foote, Fulbright's grandson, in a statement to the Arkansas Democrat-Gazette, said the political actions taken by his "poppop" on race should spark a dialogue.

"The last few weeks have seen righteous protests as this country comes to grips with its original sin of slavery against people of color. We are confronting our shameful history with dissenting voices, long ignored. Poppop, as we called Senator Fulbright, was an energetic proponent of the courageous conversation," Foote said.

He continued: "While fundamentally a progressive man, his signature on the Southern Manifesto was the Faustian pact he made in order to stay in office in Arkansas. Despite driving positive impact where he could and did, from his vocal opposition to McCarthyism and an unjust war in Vietnam to promoting international peace and understanding via scholarships and exchange programs, his race-focused political actions cast a burden of shame on his legacy and one that should be the source of just this kind of conversation happening in Fayetteville."

"Under Sen. Fulbright's dream, I would have resided at a segregated dorm, likely riddled with infrastructural deficiencies, parked somewhere off-campus -- if there were even enough spots allocated for minority students -- and eaten at a dining hall likely to receive less funding than the white dining halls," Tidwell wrote.

Some who signed the online petition included comments.

"I'm a Fulbright alum and I can't believe I never even knew how racist he was until now and I'm really disappointed in the U of A for tarnishing every arts and sciences student diploma w his name," wrote Madi Watkins, a 2019 UA graduate.

Elizabeth Miller, a part-time sociology instructor at UA and alumna, wrote: "My Black students, and all students at the University of Arkansas, deserve inclusive and historically mindful learning environments."

The statue of Fulbright was dedicated in 2002. The bronze sculpture depicts Fulbright as about 7 feet tall, not including its base. A 2002 Democrat-Gazette report states that its cost of $100,000 was included in an $850,000 fundraising campaign that also paid for what's known as the Fulbright Peace Fountain.

The University of Arkansas board of trustees approved the J. William Fulbright College of Arts and Sciences name in 1981 after a $1 million gift from the Stephens Charitable Trust. An article in the Arkansas Gazette described Jackson Stephens, at the time the chairman and CEO of the investment banking firm Stephens Inc., as a longtime friend of Fulbright.