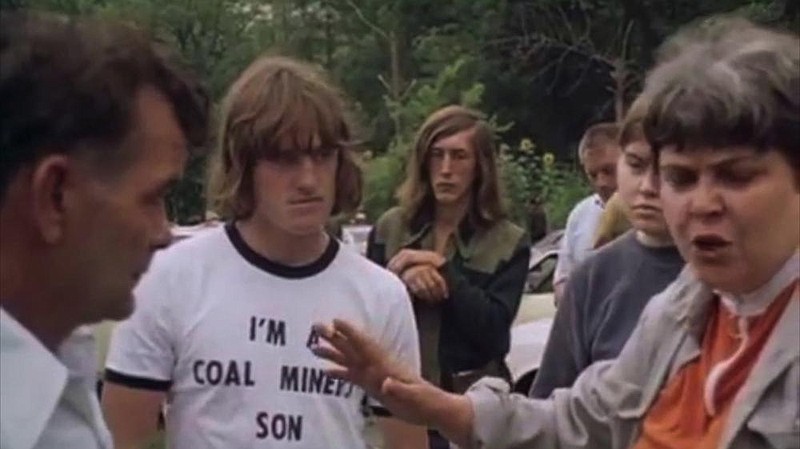 Shut in as we are for the foreseeable future, there will likely never be a better time to hitsome of the outstanding streaming possibilities at our fingertips, and fortunately enough, there has never been more available from which to choose.

1 "James White" (2015): When Christopher Abbott left "Girls" in a seeming huff about the triviality of his character during its run a few years ago, most people at the time shrugged and assumed he was just another kid who was too late to recognize what kind of a break he had just gotten, that is if we thought about him much at all.

Turns out, though, he was on to something and proved to be absolutely right to leave the show and move on to more serious work. He has been reliably brilliant in many films since then, but this, his first starring vehicle, offers him at his very best. An emotionally devastating film from writer/director Josh Mond, Abbott plays the titular character, a well-meaning, but hugely irresponsible young man who has a knack for making the wrong calls and forcing everyone around him to live with his bad decisions.This is especially true of his long-suffering but loving mother, searingly played by Cynthia Nixon, who's been sick with cancer.

When the disease comes back with a vengeance, it forces James to face the world a little more head-on, but not without it exacting a pretty horrific toll on him. Quick tempered and hugely impulsive, he has no place to put his anguish except upon everything else around him. For those of us who have lost a parent, the film's unrelenting intimacy is very nearly unendurable, but I have nothing but mad respect for a filmmaker who can look into that particular abyss so unflinchingly. It was a monster of a film, and the announcement of a phenomenal young actor, suddenly proving his earlier career choices were more than justified.

2 "Inside Man" (2006): You know you're cooking with gas when even the title of your film is clever double-entendre. This Spike Lee-helmed thriller finds the director at his most subdued, but even toning down his usual assortment of pet maneuvers and bevy of storytelling quirks, the film is indisputably his.

Set primarily at a Wall Street bank in the midst of a impenetrably clever robbery, lead by mastermind Dalton Russell (Clive Owen), as investigated by detectives Keith Frazer (Denzel Washington) and Bill Mitchell (Chiwetel Ejiofor), and somewhat exacerbated by power-broker Madeleine White (Jodie Foster), working on behalf of the bank's supremely wealthy director, Arthur Case (Christopher Plummer). The film hopscotches time frames, from Russell's direct address to us in the beginning ("Pay strict attention to what I say because I choose my words carefully and I never repeat myself"), to the actual robbery, and then after the supposed heist when every single one of the hostages is a suspect.

Russell Gewirtz's script is clever, meticulous, and beguiling, your sympathies swinging from the robbers to the detectives and back again (a far cry, it must be said, from the next film he penned, the absolutely dreadful Righteous Kill). In addition to some choice Lee-type flourishes -- the effective use of overhead shots, a subtle Hitchcockian pan/zoom combo, a shot of Frazier coming toward the camera on one of Lee's beloved moving platforms -- the film plays with its well-cast assembly of New York characters. There's the mouthy gal from Long Island, the gritty construction worker who loathes his ex-wife, the elderly Jewish woman who refuses to strip down as the other hostages are forced to do, all of whom, and many others, who construct a kind of time capsule of the era (post 9/11, there are numerous references to the event, from the cops' instant distrust of a Sikh banker -- "He's an Arab!" -- to Lee filming one scene in front of a giant mural that says "We Will Never Forget" over and over again).

This is not a time to watch cop movies that glorify the profession, but this effort, a twisty, complex negotiation of power and redemption, steers clear of the cops-as-heroes motif in favor of something a good deal more complex. Caper-type thrillers like this work in one of two ways, primarily, either we watch the planning stages in anticipation of the actual execution, or we watch as the plan unfolds with the audience as in the dark as the hostages, and this film is a deliriously fun example of the latter. Everyone's motivations seem capricious and unclear until the final reveal, a most satisfying sort of experience.

3 "Escape From New York" (1981): It's pretty much unfathomable now, but in the '70s and early '80s, the idea of a completely dystopian New York was anything but far-fetched. Bankrupt, corrupt, decrepit and dangerous, the city was known more for the hard-bitten survival skills of its citizens (as with many big U.S. cities at the time), than as the glamour and media empire it has become.

The idea certainly took hold in Hollywood, so a rash of films detailing the uncivilized hellscape that was Gotham became a common trope (the most famous of which, "Warriors," still retains cultural relevance), but perhaps no film better encapsulated the sentiment than to turn the entire island of Manhattan into the New York Maximum Security Penitentiary for all the criminals in the country. John Carpenter's bugnuts action film, involving an eye-patch wearing criminal named Snake Plissken (Kurt Russell), sent into the city by desperate authorities to rescue the President (Donald Pleasence), whose plane crash-landed there, is considered a classic in the '80s tradition (highlighted by questionable plotting, cartoon-like character development, and cheesy effects). As Snake makes his way through the ruined streets and bombed-out buildings (mostly shot in East St. Louis), we get to witness the utter decay of American urban civilization, before money -- coinciding with the rise of yuppiedom -- began pouring into the coffers by the later '80s.

As a plotted film, there are, shall we say, a great number of fanciful leaps of logic and inconsistencies, but to dwell on them would be a mistake. It's a film beloved for its dark vision of a society completely divided into the camps of lawless chaos, and regimented order, with Snake neatly fitting between the two poles. It helps that the cast is peppered with notable character actors -- Ernest Borgnine, Harry Dean Stanton, Isaac Hayes -- and that Russell, desperate to break out of his early "Disney-kid" roles, takes Snake about as far as he can go, hissing his lines, and sneering at just about everything in his path.

4 "The Overnight" (2015): So much comedy has already been mined about thirtysomething couples suddenly finding themselves saddled with kids and/or adulthood and (too) desperately wanting to stay hip and relevant -- Neighbors, or the vastly superior While We're Young, to name but a pair -- to the point where the gig is getting pretty played out.

So writer/director Patrick Brice's fast-paced comedy comes with a certain amount of skepticism attached. His young-ish couple -- played charmingly by Adam Scott and Taylor Schilling -- have moved to L.A. from Seattle recently and are still in that dreary stage of relocation when you realize you have to start over making friends. At the park one morning, they are discovered by a free-spirited father (Jason Schwartzman), who takes to them immediately and invites them and their small son to come over to their house that night for dinner.

What ensues goes far beyond the standard set up of squares-meet-bohemians joint -- involving butt-focused paintings, dance parties, Thai massage parlors, and numerous penile prosthetics -- that makes for a generally winning madcap formula. True, the ending leaves us about nowhere, but the rest of the film is pleasingly shaggy and often surprising, which is more than can be said about the majority of the mini-genre from which it spawns.

5 "Harlan County U.S.A." (1976): Barbara Kopple's powerful doc about a group of striking coal miners in Kentucky has stood as a testament to the struggle against corporate greed and callousness for 44 years, but it's with the depiction of the law enforcement of the county -- and the state -- that feels most prescient now. As the miners, and their wives, attempt to fortify the picket lines against both the scabs trying to get to the mines, and the group of violent thugs the company, Duke Power, hired to intimidate and rough up the strikers, it's perfectly clear whom the cops are trying to protect, and who they are not. As pointed out by local female firebrand Lois Scott, they don't lift a finger when the strikers are beaten up and shot at, but react instantly if they think one of the miners gets out of line.

Still, the police-as-oppression-gatekeepers is but one of the fascinating threads of this film, which won the Academy Award the following year. Kopple and her crew were taken in by the miners and their families, and the intimacy of their struggle remains some of the most poignant such footage ever captured on film. Through the hardship and the cruelty of the company, the miners stick together as best they can, eventually enlisting the aid of other union members from across the country, as a show of solidarity. But it is only when the violence reaches a tragic peak that the negotiations -- with the aid of the U.S. government -- finally begin in earnest.

A decade after that film's release, John Sayles made "Matewan," a lightly fictionalized drama about a similar miner uprising in 1920, also resulting in violent tragedy. As one union man puts it in this film, the miners will always have to fight. Else, as one of the many beautiful bluegrass pro-union ballads Kopple uses as the film's soundtrack has it, "I spent my whole life digging my own grave."