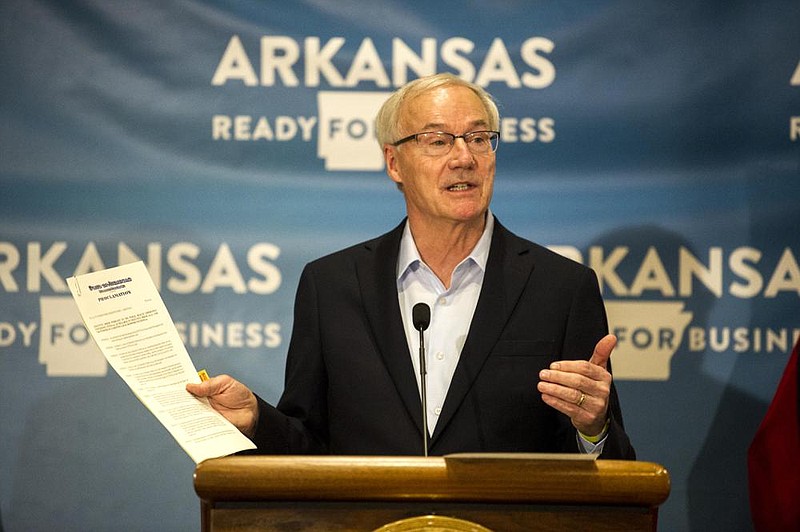 Gov. Asa Hutchinson on Friday displays a model ordinance that would allow cities to require the use of face coverings in public “according to [state Department of Health] guidelines.” More photos at arkansasonline.com/74gov/. (Arkansas Democrat-Gazette/Stephen Swofford)

According to a model ordinance attached to the order, cities can require the use of face coverings "according to [state Department of Health] guidelines."

The order allows law enforcement and city officials in cities that adopt a requirement to "educate and encourage members of the public who decline to wear face coverings about the efficacy of wearing such coverings."

Police in those cities can also assist businesses that want to require masks on their premises, according to Hutchinson's order.

The order prohibits cities from adopting ordinances that go beyond the model it spells out.

That model doesn't include a penalty for not wearing a mask.

Unlike an ordinance adopted by Fayetteville last month, it also doesn't mandate that businesses require customers to wear them.

"Let me emphasize that this is a local option," Hutchinson said. "It's an option for cities to give them more flexibility if they have a community in which they might have a surge in cases."

Hutchinson made the announcement as the state's count of coronavirus cases rose by 547, to 22,622.

The state's death toll from the virus, as tracked by the Health Department, rose by two, to 281.

[Video not showing up above? Click here to watch » https://www.youtube.com/watch?v=_fsC2oV5mlc]

The number of Arkansans hospitalized with covid-19 rose by 13, to 285. Seventy of the hospitalized patients were on ventilators, up from 69 a day earlier.

The number of cases in the state that were considered active, meaning the person had tested positive and had not yet recovered, increased by 79, to 6,177.

That reflected the two deaths and 466 people who were newly classified as having recovered.

Hutchinson earlier had discouraged cities from adopting mask requirements, saying he didn't want a "hodgepodge" of different rules around the state.

He has also said Arkansans wouldn't support a statewide requirement to wear a mask in all public places.

On Friday, however, he released results from a poll showing that 82% of Arkansas adults already wear "personal protective equipment like a mask" in public places.

"The survey shows the public education has worked, that there's public acceptance" of wearing a mask, Hutchinson said.

The telephone poll of 600 Arkansans was conducted by the Gilmore Strategy Group and had a margin of error of plus or minus 4 percentage points. That group is the political consultant used by Hutchinson.

Two percent of respondents said they didn't know if they wore a mask or didn't answer the question.

Hutchinson said he worked with the Arkansas Municipal League on the model ordinance. He said the ordinance alleviates his concern about having different rules in different cities.

If adopted by a city, the ordinance allows "local law enforcement and other city officials to act in a support capacity to local businesses that wish to enforce the use of masks on their premises."

Law enforcement can also educate "individuals who decline to comply with the facial covering requirement of any local business that the individual must abide by that requirement or leave the premises," the model ordinance says.

John Wilkerson, general counsel for the league, said a customer who refuses to abide by a business's mask requirement and won't leave could be arrested for trespassing.

Fayetteville's ordinance requires businesses to require their customers to wear masks and to provide disposable masks to the public for free or a nominal fee.

Businesses that refuse to comply can be fined up to $500, or $250 a day for a continuing violation.

"I don't think that we'll be trying to roll back the Fayetteville ordinance," said City Council member Matthew Petty, the measure's sponsor.

"I think anybody who says today that we will never have a need to enforce a mask requirement is making a promise they might not be able to keep."

Since the ordinance was passed June 16, he said he's seen an increase in people wearing masks in businesses and businesses requiring them.

He said that to his knowledge, no fines have been issued.

"We have made a decision in the first weeks of our ordinance that we will put our resources into outreach and education and attempt to exhaust those avenues with individual businesses before we would pursue strict enforcement action," Petty said.

He added that he'd like to see the state give cities money to help with their education campaigns and for the state to form a working group of cities and the Health Department to coordinate with Hutchinson and discuss how to educate the public and enforce directives.

"Cities need a guidebook or toolkit for doing outreach and education," he said. "It's not going to be enough to just write a check."

Little Rock Mayor Frank Scott Jr. issued an executive order last week requiring people to wear face coverings "in all public places except when it is likely that physical distancing of at least six (6) feet from other individuals is practicable."

Residents are "exhorted" to wear masks in places such as grocery stores, convenience stores and laundromats, and while riding public transportation.

But the order also says people are not required to wear a mask "in a private business open to the public," a provision that was included so it would not be interpreted as placing restrictions on commerce.

Hutchinson has said Fayetteville's ordinance conflicts with his emergency declarations, which prohibit cities and counties from issuing "quarantine regulations of commerce or travel" except "by authority of the Secretary of Health."

But he said he supports Scott's order, describing it as "an encouragement to wear a mask."

In a statement, Scott said he's "thankful that today Governor Hutchinson signed an executive order allowing cities to adopt a model ordinance that is very similar to Little Rock's order."

"It is important that cities around the state have another means of helping protect the health of their residents," Scott said. "I'm also grateful to Little Rock's residents, visitors, and businesses that are abiding by the order."

He didn't answer when asked whether he will ask the city's Board of Directors to adopt Hutchinson's model ordinance.

A model included in a forecast report Friday by the University of Arkansas for Medical Sciences' Fay W. Boozman College of Public Health predicts the number of Arkansans hospitalized with covid-19 at any given time will peak at 2,794 on Oct. 29 under a moderate scenario and 4,650 on Oct. 24 in a worst-case scenario.

That's an improvement from the college's June 19 report, which forecast hospitalizations peaking at 3,673 on Sept. 20 under a moderate scenario and 6,461 on Sept. 21 in a worst-case scenario.

The latest forecast also predicts that, under a moderate scenario, the number of Arkansans in an intensive care unit would peak at 838, with 586 patients on ventilators.

The total number of cases in the state by that time, including those recovered or who had died, would reach 111,776 under that scenario.

"For the first time since our modeling began, our predictions for the number of beds, ICU beds, and ventilators needed at the state level all fall below the estimates of current supply, however it should be noted that there are still regional variations," the researchers with UAMS and the University of Arkansas, Fayetteville wrote.

The report doesn't say why the predicted number of cases and hospitalizations fell since the last report but notes that the estimate for the average number of people each infected person will infect had dropped slightly, from 2.68 to 2.41.

Asked about the change, College of Public Health Dean Mark Williams said in an email, "The hospitalizations are produced using a moving mean model. This model is not as reactive to current data, as are other models.

The cases added to the state total Friday included 84 in Washington County, 74 in Pulaski County and 74 in Benton County. All the other counties had fewer than 20 new cases, Smith said.

The number of cases among prison inmates increased by 182. Smith said that increase reflects both new cases and cases that were reported earlier but weren't classified as inmate cases until the department verified where they were from.

The Little Rock Zoo announced Friday it would close until further notice after a staff member tested positive.

It said the employee worked "in the facilities operations division," never had a fever and did not have contact with the public.

"Zoo Director Susan Altrui stated that safety is a priority for the Little Rock Zoo and that the Zoo will close to sanitize areas, test staff and ensure public safety before reopening," the zoo said in a news release.

Meanwhile, Smith said the Health Department is investigating a cluster of cases involving three people who traveled in the same vehicle to several bars in Little Rock and North Little Rock and later tested positive.

A fourth person who was with the group also tested positive.

Smith said the people all had contact with each other in other settings, so it's not clear whether the virus transmission occurred in a bar or somewhere else.

The investigation includes reviewing security camera footage from the bars to determine who else the infected people had been with. 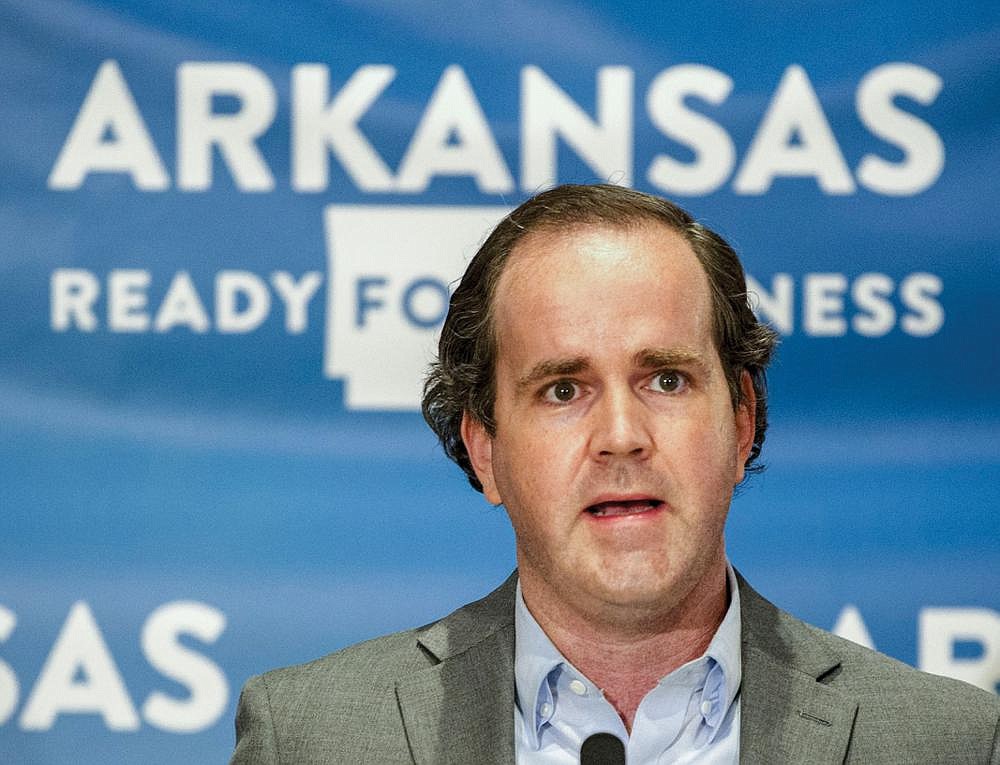 John Wilkerson, general counsel for the Arkansas Municipal League, said that under the model ordinance, a customer who refuses to follow a business’s mask requirement and won’t leave could be arrested for trespassing. (Arkansas Democrat-Gazette/Stephen Swofford) 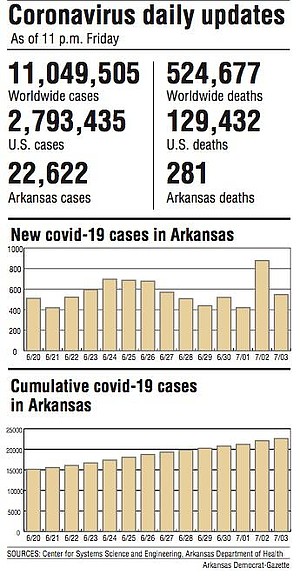