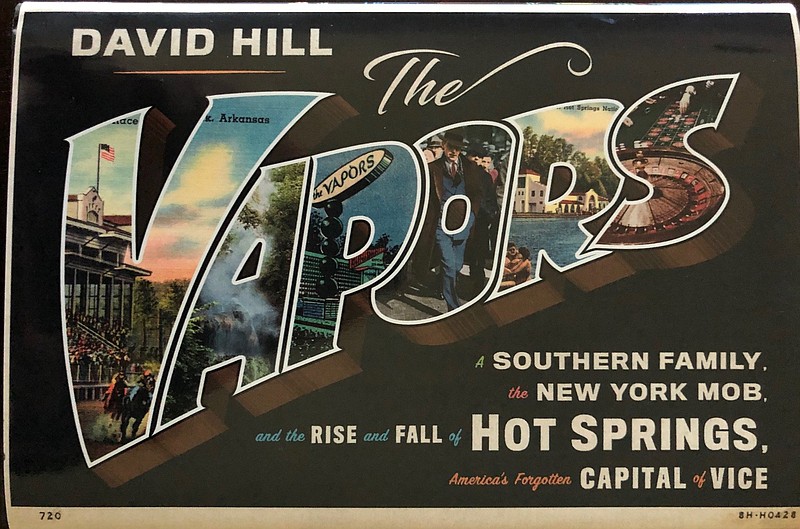 “The Vapors” is David Hill’s new book about Hot Springs. (Special to the Democrat-Gazette)

"Hot Springs, however, didn't play by the same rules as everyone else."

Hot Springs has always been different. A funky tourist town where hippies, artists and gamblers rub shoulders on Bathhouse Row and bet on horses at Oaklawn Park, the story of the Spa City — through most of the 20th century, at least — is also populated by mobsters, crooked politicians, graft and grifters.

At one time, though gambling was illegal in Arkansas, the city of 28,000 had four major gambling clubs and 70 more casinos, bookmaker shops and establishments with some form of gambling, writes Hot Springs native David Hill in his new book, "The Vapors" (Farrar, Straus and Giroux, $28).

"On a per capita basis, Hot Springs was perhaps the most sinful little city in the world," Hill, 42, writes.

In the world? Maybe that's a stretch, but Hill certainly makes a case that skirting the law was de rigueur in Hot Springs. This is the place, after all, where a stunned New York detective, in town picking up another suspect, ran into mobster Lucky Luciano, the most wanted man in America, strolling along Bathhouse Row with the Hot Springs chief of detectives.

Hill's book, subtitled "A Southern Family, the New York Mob, and the Rise and Fall of Hot Springs, America's Forgotten Capital of Vice," is an intensely researched, gripping account of Hot Springs' seedy, rollicking past and its near-miss to beat out Las Vegas in becoming America's first bonafide gambling destination.

The book, Hill's first, will be released Tuesday. He will appear during a Virtual Book Talk event at 6 p.m. Wednesday through the Garland County Library. See www.gclibrary.com/news/ for information.

He skillfully uses the stories of three people to peel back layers of the Hot Springs underworld, a place of crooked elections, greed, boozy nights and dreams of long-shot payoffs.

There's Owen "Owney" Madden, the suave, English-born gangster, killer and owner of the famed Cotton Club in New York who moved to Hot Springs in 1934, married the postmaster's daughter and became a sort of benevolent crime-world kingpin.

Dane Harris, the quiet, ambitious son of a Cherokee bootlegger, became Madden's protege, eventually rising to the role of Hot Springs' boss gambler and who in 1960 opened The Vapors, the dazzling nightclub and gambling operation that rivaled those in Las Vegas and that was bombed on Jan. 4, 1963.

And Hazel Hill, David Hill's paternal grandmother, who was a teenager when she came to Hot Springs from Ohio in 1935 with her father, a diabetic, down-on-his-luck horse trainer and was left there by him as part of a used-car deal. Hazel's life would become entwined with Madden and Harris as she grew up and the bright lights and allure of the gambling halls became too powerful to ignore.

And there are appearances throughout from Robert Kennedy, Al Capone, Mickey Rooney, Virginia Clinton, Tony Bennett and others, including prizefighters, B-list starlets and various and sundry Arkansas politicians, many of whom are on the take. And Hill also addresses how religion and race played a crucial part in the town's history of vice.

He paces his story expertly, making this the sort of book that one grabs at bedtime with the intention of reading just a chapter or two and then finds oneself, red-eyed and wide-awake hours later, fighting to put it down.

Here. This is the first line of the Prologue.

"Down in the valley beneath the shadow of Sugar Loaf Mountain, where the hot vapors rise from the healing waters of the springs, L.V. Rowe was on one hell of a roll at the dice table."

It's all right there in that almost musical sentence, and one can't help but want to know more about this world and whether or not Mr. Rowe's luck will hold.

With "The Vapors," Hill is operating firmly within his own bailiwick. He is a native son and a gambler from a family of gamblers, though certainly not high rollers.

He has written evocatively about his kin, Hot Springs, gambling and other subjects for McSweeneys.net, where he had a column called "Fading the Vig: A Gambler's Guide to Life"; ESPN's now-defunct Grantland website; "Esquire"; "New York Times Magazine"; "The New Yorker;" theringer.com and others.

Hill, who who lives in Nyack, N.Y., with his wife, Katie Gerken and their three children, says the idea for "The Vapors" came from "The Invaders," his 2012 essay for Grantland about a 1983 killing involving Hazel Hill's ex-husband and a fixed horse race.

"I was telling this story of the place where I grew up, a place that I knew really well and a place that I took for granted how interesting it was" he says during an interview last month. "The reaction to the story wasn't, 'wow, this guy is a kick-ass writer,' it was, 'wow, this is such a wild and weird place' and everyone wanted to find out more about it."

When it came time to pitch book ideas to an editor, Hot Springs and its seedy underbelly was a natural.

"I looked at my own family, but I didn't want to do a family memoir," he says. "I wanted to tell the bigger history, so I figured out a way to do both ... the story of The Vapors, the club itself, had always been intriguing to me, and I knew that I wanted to write about my grandmother."

Hill is fiercely honest when depicting his grandmother.

"I was looking for the complete picture of this person," he says. "If I could get that, I could do her justice. I feel love and compassion for her, but I also feel real anger and resentment toward her and some of the choices she made. I try to empathize and understand ... but I feel like that by the end of the book, my relationship with my grandmother got much more complicated."

Work started on the book around 2015. In 2016 he moved with his wife and children from Brooklyn, N.Y., back to Hot Springs for a year to write and research.

"It was great. We lived off Park Avenue and every day I would walk down Park Avenue to a coffee shop to write ... it was like I was walking in the footsteps of all the people I was writing about."

His research was not limited to Arkansas, of course. He notes that he often got juicy bits of information about Hot Springs from afar.

"Looking at FBI files, not from the Arkansas office, but from across the country, painted a more complete picture," he says. "It was stark to me to see the difference in how the Little Rock and Hot Springs FBI agents wrote about Hot Springs in their reports versus the way that agents in New York and Chicago and other cities were writing about Hot Springs."

The Vapors operated as a nightclub for years even after the bombing and after its casino was closed. In 1998 it was sold to Tower of Strength Ministries, a curious irony for a former high-profile nightclub and gambling joint. It was recently back to being a performance space, though it closed March 19 due to the covid-19 pandemic.

There is a legal casino in Hot Springs now, but Hill takes us back to a time there when gambling was both out in the open and done on the down low, when it was equal parts glitz and grime with an edge of danger.

Hill's wish is that his book will be a gateway to his eccentric and fascinating hometown.

"I truly hope people like it," he says. "And I hope if they like the book, that they become intrigued and interested in visiting Hot Springs. It is a place that has so much charm and personality. If my book can bring more people to Hot Springs, I would be proud of that."