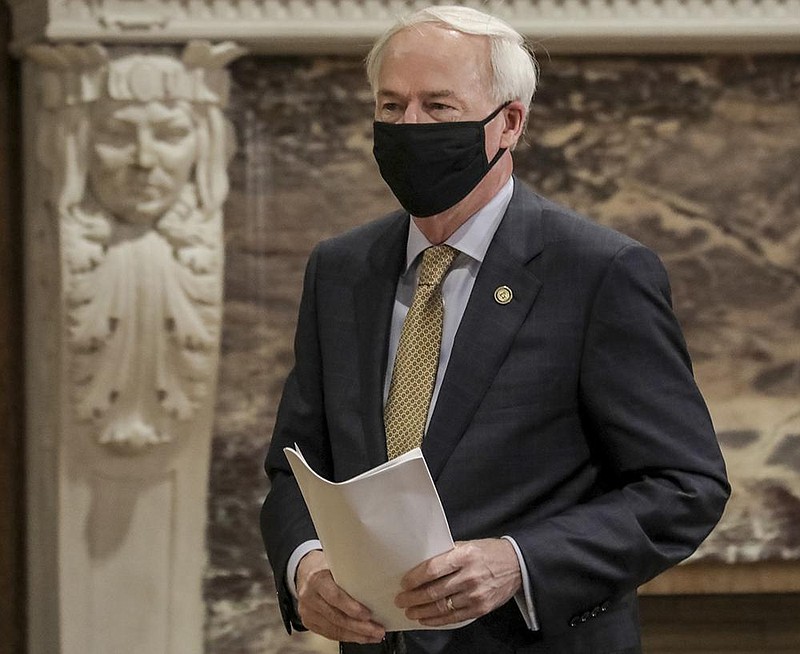 The new cases increased the state's total since the start of the pandemic to 24,253. Hospitalizations rose by 12, to 337, and another five people died, bringing the virus's toll to 292.

Over the Independence Day weekend, Health Secretary Nate Smith said, the total number of active cases in the state shrunk to 6,127 as recoveries outpaced new positive tests. But daily tests fell to their lowest level in a month Monday, with 3,615 results being recorded.

"Obviously the holiday weekend, Sunday, has an impact on that number," Hutchinson said.

In anticipation of celebrations for the holiday weekend, officials had urged adherence to public health guidelines such as social distancing and mask wearing. Public fireworks displays were canceled in Little Rock and Gentry, while other cities, such as Fort Smith, altered events to avoid crowds.

[Video not showing up above? Click here to watch » https://www.youtube.com/watch?v=I_-LX4k9otE]

Hutchinson and Smith said they wanted to avoid scenes from earlier summer weekends -- including Memorial Day -- when photos of crowds of people gathered at lakes, beaches and bars were widely shared on social media. Assessing the holiday weekend on Monday, Hutchinson said that outside of a few instances, Arkansans appeared to have largely complied with the guidelines.

"It's easy to focus on those that were not compliant," Hutchinson said.

"There was a lot of good behavior over this weekend," the governor added. "But there is a concern, and Dr. Smith and I have talked about it, as to what is going to result in a week from now and whether you're going to see an increase in cases as a result of that."

Over the weekend, the Health Department shut down a Little Rock bar over concerns about crowding and a lack of masks. Photos also circulated of people crowded together on boats on Lake Hamilton.

Hutchinson and Smith said Monday that they were raising the goal for the number of coronavirus tests they hope to run in the state this month to 200,000.The state surpassed its June goal of conducting 120,000 tests by about 40%.

The Arkansas Department of Health reported the first cases of the coronavirus in Calhoun County over the weekend, confirming that the virus has reached all 75 counties in the state.

Calhoun County, located about an hour southwest of Pine Bluff, is the smallest county in the state, with a population of just over 5,000. Two people in the county have tested positive for covid-19, according to the Health Department.

Elsewhere, the counties with the highest numbers of active cases are Washington, Benton, Pulaski and Hot Spring.

Smith continued to warn of rising cases in Central Arkansas despite a recent ebb in other regions, including in Northwest Arkansas. He said that cases in the Little Rock metro area, unlike other places that have seen spikes, can't be easily linked to a few populations or industries.

"This is pretty widespread in the central region, and so this is going to take a collective action in order to turn this around," Smith said. "There's not the same ability to focus our efforts in one area and expect it to come down quickly."

Pulaski County saw an increase of 46 cases on Monday, more than any county other than Washington, which reported 77 new cases.

Arkansas has agreed to a $20 million contract with General Dynamics, a Virginia-based company, to more than double the state's contact-tracing manpower by adding 350 workers, Hutchinson announced Monday.

The contract, which will last up to a year, will add to the 80 contact tracers currently employed by the Health Department and the 270 tracers working through partnerships with the state. Hutchinson said the state will be seeking federal funding to enter into another contract for an additional 350 tracers, bringing the total in the state to over 1,000.

"This is a huge increase in our investment as well as our capacity there," the governor said. "This doesn't mean it's going to be perfect in the fall; we'll continue to monitor that."

Smith said there is not a backlog of cases that the state has yet to begin contact-tracing efforts on, but he noted that with the current number of workers, it is "challenging" to keep up with the entire list of people who have been in contact with an infected person.

"We are not behind in terms of making that initial contact," Smith said. "Sometimes it does take us a little while to get a hold of that person, but that's to be expected."

Stephanie Williams, the health and wellness director at the Health Department, urged Arkansans to pick up if they are contacted by the number for the state's contact-tracing team. That number is (877) 272-6819.

The Conway City Council on Monday unanimously approved an ordinance that asks that masks to be worn in businesses, though police will not have the power to enforce the order.

City Attorney Chuck Clawson said the ordinance was "merely a strong suggestion to prevent and slow the spread of covid-19."

Clawson said that businesses can contact law enforcement authorities if a customer refuses to follow a mask requirement, but that "education and encouragement" would be used by responding officers.

City Council Member Sheila Isby said the ordinance allows business owners to point to a posted mask requirement and say: "This is an ordinance. We have the right to refuse you service."

Mayor Bart Castleberry said more than 200 emailed comments and questions and 50 calls were received before Monday's special meeting regarding the mask ordinance. Some were not so nice, he added.

Comments on the city's Facebook page varied, with some expressing anger at the requirement and many suggesting the city needs to take a tougher stance and pass an overall mask requirement with enforcement provisions.

"That's for giving me another reason not to shop in Conway," Dwaine Shaw wrote in the comments section of the Facebook livestream.

"Without an ordinance, the public does not take it serious," Janine Willard wrote. "Even without fines, an ordinance would at least give the illusion this city takes this virus serious."

City Council Members Theo Jones said he wants residents to realize that wearing a mask is "not just to protect you, but other people."

"Quit being selfish," he said. 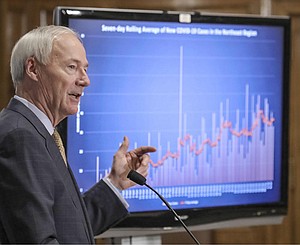