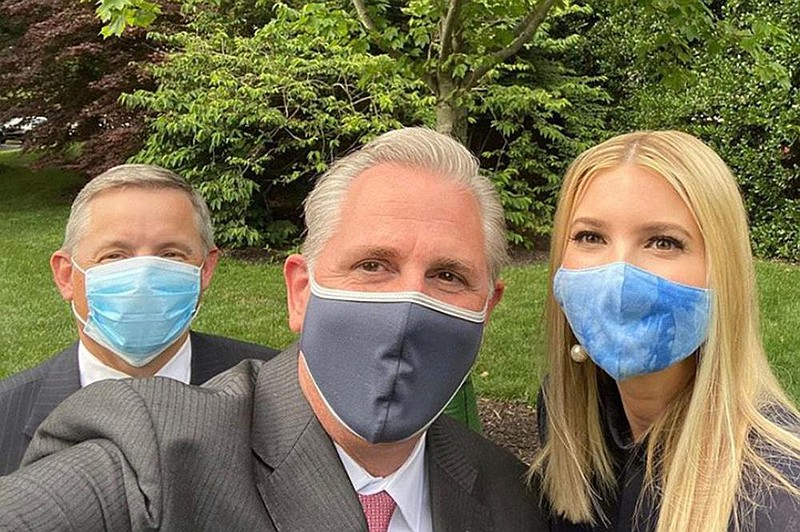 WASHINGTON -- A family nurse practitioner who is running for Congress in Arkansas says the government should mandate mask-wearing, a move she said would save lives and slow the spread of the coronavirus.

At least 21 states, including Texas, have adopted similar directives. Arkansas has encouraged, but not required, masks in most settings.

Mandatory masks might be unpopular. But sometimes leaders have to "make hard decisions that are the right thing for the people that they serve," Williams said.

While mask orders have sparked protests in some locations, they are necessary, Williams said. Instead of undercutting masking efforts, Trump should be promoting them, she said.

"Each and every one of us should be modeling good behavior, including the president. He certainly has an enormous platform ... of influence, and I think he should use it for good," she said.

Delegation members, who typically wear masks, said they wouldn't object to Trump donning one as well. But new federal dictates are unwarranted, they say.

"I don't believe in government mandates like that," said Womack, a former Rogers mayor. "If you want to wear [a mask] 24/7, even when you go to bed, that's a personal decision. I don't think the government ought to be telling you that."

Womack said he wears a mask "when I feel like it's absolutely necessary."

"When you're hanging out with people that are as transient as members of Congress, back and forth and in all kinds of different settings, I think it's wise to practice masking in many of those cases. But there are other places, outdoors and indoors, where I don't think a mask is all that necessary," he said.

U.S. Sen. John Boozman of Rogers, on the other hand, wears his mask religiously.

"I try to model that. I'm not perfect, but I do a pretty good job of it," he said. "The science clearly tells us that if we [wear masks], it helps stop the spread. It not only protects us, but it protects those around us, which is so, so very important."

Mask orders, if they come, should be issued by governors, not federal officials, he said.

"Everyone wants to go back to normal, and the fastest path there is for people to cooperate," he said. "I'm really not in favor of mandating things that are difficult to enforce."

Trump has appeared more open to the idea of wearing a mask in recent days, Boozman said, portraying the shift as positive.

"People need to set a good example," he said.

"In my view, members of Congress have been very diligent about mask-wearing," he said. "When they're traveling to the House chamber, traveling to a committee hearing, traveling to the cafeteria or elsewhere in the complex, they generally, to me, appear to be wearing masks on a regular basis and take them off while eating, drinking or speaking at a microphone."

If there are going to be mask orders, they shouldn't be coming from Washington, Hill said.

"That determination needs to be made locally based on local conditions. And the best people to do that are local and state officials, not the U.S. government," he said.

Hill's Democratic opponent, state Sen. Joyce Elliott of Little Rock, said mask-wearing efforts have been undermined by mixed messaging, and she faulted Trump for sowing doubt about their effectiveness.

"I wear a mask because I really think it's important for me to do so," she said. "Everybody in our campaign office wears a mask. Everybody. All the time."

U.S. Rep. Bruce Westerman of Hot Springs said he wears his mask regularly, including Wednesday when he visited the White House to promote forestry legislation.

While there, he had his picture taken with two other masked Americans -- House Minority Leader Kevin McCarthy, R-Calif., and the president's daughter, Ivanka Trump.

Westerman's Democratic opponent, William Hanson of Hot Springs, did not respond to requests for comment in time to make this article.

Although Westerman believes mask-wearing is wise, "I think it should be voluntary," he said.

"I think people are smart enough to follow the guidelines and do the right thing on their own," he said.

A mask mandate could actually backfire, he said.

"I think you'll get more people rebelling and not wearing them on purpose if we do that," he said.

"I don't know that we need the government making demands that everybody wear masks in public, because then it becomes an issue of widespread virtue signaling and people reporting on individuals they saw not wearing masks," he said. "We already have enough problems in this country as it is."

Persuasion, he suggested, might be more effective than coercion.

"If I've got to wear a mask as a condition of getting our economy back on track, I'm willing to do that and I think most Americans are," he said. "If the science says that helps slow the spread, I'm not going to debate the science of it."

U.S. Sen. Tom Cotton of Dardanelle said masking decisions should be based on "local conditions."

"Conditions are obviously very different all across the country," he said.

The orders, if issued, aren't guaranteed to succeed, he suggested.

"Even in those places where it has been, quote-unquote, mandated, the conditions on the ground suggest that many people are not adhering to that policy and local authorities trumpeting their mask mandates are not enforcing them," he said.

Whitfield, who failed to qualify for the ballot but is suing to gain access, said he believes face coverings are effective at slowing the spread of the virus.

"Every time I leave my house, I wear a mask," he said.

Asked why he does it, Whitfield said, "Because I care about my family and the people around me."

Libertarians hoping to represent Arkansas in Congress are united in opposing federal mandates.

Most of them are masking up anyway.

The party's senate nominee, Ricky Dale Harrington, wears one. The Pine Bluff man said he's troubled by how politicized the debate has become.

"It's a cultural problem that we are seeing manifest through this crisis right here," he said. "We don't care about one another. We care about our opinions, our ideas, more than people's lives."

Frank Gilbert, who is challenging Westerman, agrees that masks are beneficial.

"I wear one. I encourage other people to, and if business owners and individuals wish to mandate it, that's good enough for me," he said.

Asked whether it would be helpful for Trump to set an example by wearing one, Gilbert said, "Undoubtedly."

"That's a lot more effective to me than executive orders or threats," he said.

Asked whether the president should wear one, Kalagias said: "It's a personal choice. I mean, it's up to him."