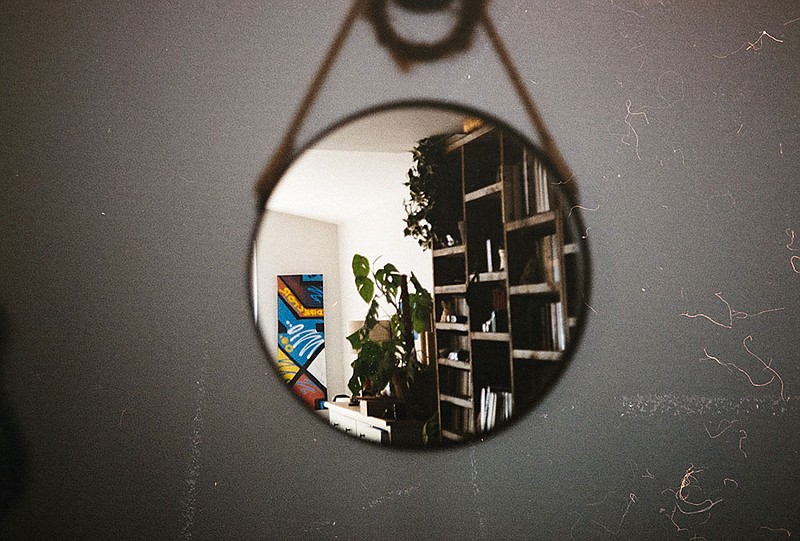 A FEW WEEKS ago, I sat on my balcony, watching the neighbor’s kid, a little wisp of a thing, waving her bubble wand around with fluttery arms. I swaddled myself in an oversized knit cardigan, still clutching an open book, even though I was too distracted by the stream of iridescent bubbles to do any real reading. My dog was splayed out, panting in the sun. The air, full of the not-yet-ripe tomatoes and strawberries growing on my patio, smelled like the color green. It was sort of sunny and sort of cool—just one of those good spring days when all you’d want to do is find a reason, any reason, to go outside. Things felt normal—boring, even.

It was then that I felt my stomach flip. A sadness pressed down on me. Not only was I mourning the loss of outdoor activities, I was trying to swallow the tough pill of dealing with reduced work hours and two job losses in the family, the news of which came back to back. I was overwhelmed with worry about my mother, who has pre-existing conditions and falls into the age group most aggressively targeted by the coronavirus. That’s to say nothing about my grandmother and aunt, who already have a laundry list of health issues and live continents away, an added stressor, given today’s travel restrictions.

All these worries and the smaller worries tucked within them came rushing to my brain like a swarm of flies attacking a lump of sugar. I wish I could say I haven’t thought of those things since then, but that just wouldn’t be true. The virus didn’t go anywhere, and is, in fact, setting new records. But it’s not the only threat to our health. With loss of human contact in this disordered time, anxiety and depression are worming their way into our lives. Data collected by the United States Census Bureau in an ongoing survey found that a third of Americans are experiencing mental distress with symptoms of clinical anxiety or depression.

Suffice it to say, we’re all looking for answers—or at the very least, advice on how to function, knowing we might not be getting them soon. And that’s the same reason we reached out for help.

It’s a Thursday morning, and I’m about to interview Sacha A. McBain, Ph.D., and Christopher S. Cargile, M.D., both experts in mental health. Cargile is a psychiatry specialist at the University of Arkansas for Medical Sciences, and McBain is an assistant professor in the department of psychiatry and the department of surgery, whose work focuses on mental-health care post-trauma. When their faces materialize on my computer screen in my bedroom (I tucked a little desk and chair into a corner and now call it an office), we immediately begin a discussion about routines.

As human beings, they say, we rely on routines, on doing specific things in a specific order, on rinsing and repeating: like getting up at the same time, spreading the same jam on toast, driving the same route to work, getting the same cup of coffee from the office kitchen. Now those familiar routines are in flux. “That’s something that I hear a lot from people, regardless of where they’re from or their backgrounds,” McBain says. “Just that disruption in routine is a big stressor, bigger than you would expect.” The stress brought on by uncertainty is what keeps people up at night, sometimes even literally.

“Normal” stress is a part of our daily lives, and in small doses, it’s even important. If we didn’t feel any stress at all, for instance, we wouldn’t even bother showing up to work. There’s the more temporary, transient kind of stress, an immediate reaction to some sort of distress or outside force. We start to feel on edge, have difficulty concentrating or even experience symptoms such as a racing heart, sweaty, clammy skin, or tension in our bodies. But temporary stress, too, wears off.

Chronic stress, on the other hand, occupies different territory. As we know, fight or flight is a natural response to a threat. But when we linger in that mode for too long, virtually every part of our bodies suffers heavy, repeated blows, including our cardiovascular, musculoskeletal, gastrointestinal and immune systems. It becomes harder and harder to herd our thoughts and curb our physiological responses. Fear pulls up a chair and settles in for the long haul. Our moods become as malleable as tissue paper. “If your body is constantly physiologically activated in that way, it’s kind of like trying to drive a car in first gear at 60 miles an hour,” McBain says. “You can do that for a little while, but eventually, your transmission will go out. And that’s what happens to our bodies.”

Though this pandemic can be thought of as sort of a “collective traumatic experience,” there’s cumulative stress that piles on for different groups of people. Kids, who aren’t yet able to conceptualize what’s going on, are floundering after the collapse of familiar schedules and structures, and picking up on discernible shifts in their parents’ attitudes and stress levels. Teens and young adults are missing out on milestones, facing an off-balance education system and entering an upside-down job market. Those who’ve lost their jobs are struggling to make ends meet and, on an emotional level, a battered sense of self-worth in a society where so much of our identity is tied to our work. Advanced-age groups not only have to deal with increased fear of getting sick, but with folks referring to the virus as something only the elderly should be concerned with, they’re also feeling disposable, and under even more stringent physical-distancing rules, crushingly alone.

In the context of race and ethnicity, COVID-19 has hit black Americans especially hard. Aside from the fact that they are disproportionately killed by the virus, there’s also the added pain, hurt and suffering in the wake of nationwide protests sparked by the video of George Floyd’s death and a long-eroded confidence in the justice system. According to the same survey by the U.S. Census Bureau, Asian Americans, who are dealing with increased racism and stigma associated with the virus, are also reporting a spike in mental distress during this time.

There are also those who are immunocompromised as a result of illness or disability—not to mention health care workers, who are dealing with intensified pressures of their professions on top of everything else.

That said, if stress begins to impair your daily functioning and invade your sleep, it’s a good time to make a conscious effort to examine your feelings, practice self-compassion and remind yourself that having a response is not just valid, but normal, in an unprecedented time like this. And if that stress is more severe (such as suicidal thoughts or self-destructive distress), then it is time to seek out professional help.

The thing to focus on, ultimately, is intention. In our pre-pandemic lives, ordinary daily activities happened naturally, sometimes with us barely even trying. Now, that’s changed. “Social connection has to become intentional,” Cargile says. If it’s not intentional, chances are it won’t happen. Here’s how to breathe intention into our lives—and why it helps.

(As told to Mariam Makatsaria by Dr. Sacha McBain)

“The closest field that we have to what we’re going through right now is disaster mental health. In disaster mental health, there’s something called psychological first aid. It’s really all about this: What are the practical things that we can do to help people recover or facilitate natural recovery after, or in the midst of, a stressful experience? And social support comes up over and over again—that’s how crucial it is to mental health. Obviously, we can’t access social support now in the way that we’re used to. You can’t go hang out with friends in the same ways as before, but you can be intentional about sending a text, calling, doing a video call or staying 6 feet away from each other, like in an open space.”

“This is called behavioral activation, and it’s basically a clinical way of saying ‘engaging in pleasant or planned activities.’ It’s the number one intervention that we have for depression. Before we do anything else, we have people start to think about how they’re engaging in positive activities and how they’re getting their bodies moving. How can you build things into your day that you’ll look forward to? People used to have trips planned that got them through the slog—and now they don’t. So it’s like, what other smaller-scale things can you plan to look forward to, maybe even on a micro level? Extra bonus points if you can create a routine based on those things.”

“We all hear about self-care, like getting your nails done or taking a bath. But there’s something called ‘radical self-care,’ which is the harder part of self-care. It’s prioritizing your mental health by setting boundaries around how you direct your energy. For example, requesting a mental-health day from work—even if you feel really guilty, and even if it’s really uncomfortable and something you’ve never done before. It might be setting boundaries with a loved one, especially in such an emotionally heightened time, when you probably have friends and family who have different views. That’s radical self-care.”

Take care of your body, too

“I think taking care of your physical health is taking care of your mental health. We also have to think intersectionally about what people have access to, in terms of their physical ability, environment, safety, access to healthy food and so on. It’s about doing the best you can within those realms, given what you have right now. It doesn’t have to be perfect. Sometimes, when we say ‘exercise,’ people think they have to go sign up for some circuit-training class, and that can feel really restrictive and inaccessible. But it can really just be as simple as walking. If you can’t walk, you can practice breathing or tensing and relaxing muscles while sitting on the couch and watching a movie. It can be lots of different things that can fit with different people’s abilities.”
ADVERTISEMENT