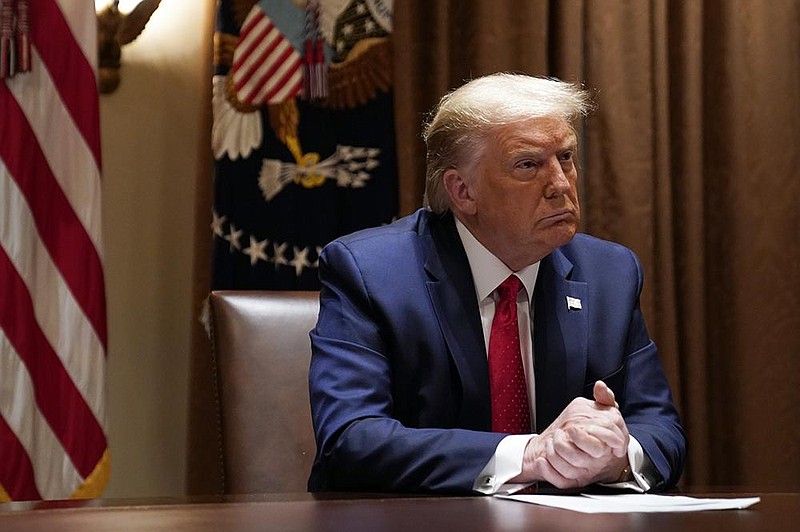 President Donald Trump meets with Hispanic leaders Thursday at the White House. In remarks to reporters, he reasserted that he is a victim of “a political witch hunt, the likes of which nobody’s ever seen before.” More photos at arkansasonline.com/710president/. (AP/Evan Vucci)

WASHINGTON -- The Supreme Court cleared the way Thursday for prosecutors in New York to seek President Donald Trump's financial records, but in a separate ruling said Congress could not see many of the same records.

The decision in the New York case said Trump had no absolute right to block release of the papers and would take its place with landmark rulings that required President Richard M. Nixon to turn over tapes of Oval Office conversations and that forced President Bill Clinton to provide evidence in a sexual harassment suit.

"No citizen, not even the president, is categorically above the common duty to produce evidence when called upon in a criminal proceeding," Chief Justice John Roberts wrote for the majority. He added that Trump might still raise objections to the scope and relevance of the subpoena requesting the records.

Justice Brett Kavanaugh put it another way: "In our system of government, as this court has often stated, no one is above the law. That principle applies, of course, to a president."

[Video not showing up above? Click here to watch » https://www.youtube.com/watch?v=gG7Tfx1_HlA]

In the ruling regarding Congress, the Supreme Court said the case should be returned to lower courts to examine whether Congress should narrow the parameters of the information it sought, meaning that the practical effect of the two decisions is that the records will not be made public before the election this fall.

The chief justice wrote the majority opinions in both cases, and both were decided by 7-2 votes. The court's four-member liberal wing voted with him, as did Trump's two appointees, Justices Neil Gorsuch and Kavanaugh.

Justices Clarence Thomas and Samuel Alito dissented in both cases.

"While the decision will of course have a direct effect on President Trump, what the Court holds today will also affect all future Presidents--which is to say, it will affect the Presidency, and that is a matter of great and lasting importance to the Nation," Alito wrote.

"The Court has reaffirmed the Congress's authority to conduct oversight on behalf of the American people," Pelosi said in a statement.

Trump immediately attacked the outcome on Twitter. "This is all a political prosecution," he wrote. "I won the Mueller Witch Hunt, and others, and now I have to keep fighting in a politically corrupt New York. Not fair to this Presidency or Administration!"

Hours later, the White House released a statement saying Trump was "gratified" by one of the decisions and had been "protected" in the other.

Trump had asked the court to block both sets of subpoenas, which had sought information from his accountants and bankers, not from Trump himself. The firms have indicated that they would comply with the courts' ultimate rulings.

Trump's lawyers had argued that he was immune from all criminal proceedings and investigations so long as he remained in office and that Congress was powerless to obtain his records because it had no legislative need for them.

Jay Sekulow, a lawyer for Trump, portrayed the decisions as at least a temporary victory.

"We are pleased that in the decisions issued today, the Supreme Court has temporarily blocked both Congress and New York prosecutors from obtaining the president's tax records," he said in a statement. "We will now proceed to raise additional constitutional and legal issues in the lower courts."

The New York case concerned a subpoena to Trump's accounting firm, Mazars USA, from the office of the Manhattan district attorney, Cyrus R. Vance Jr., a Democrat. It sought eight years of business and personal tax records in connection with an investigation of what role Trump and the Trump Organization played in hush-money payments made in the run-up to the 2016 election.

Vance expressed satisfaction with the ruling. "This is a tremendous victory for our nation's system of justice and its founding principle that no one -- not even a president -- is above the law," he said in a statement. "Our investigation, which was delayed for almost a year by this lawsuit, will resume, guided as always by the grand jury's solemn obligation to follow the law and the facts, wherever they may lead."

Both Trump and his company reimbursed Michael Cohen, the president's former lawyer, for payments made to pornographic film actress Stormy Daniels, who claimed that she had an affair with Trump.

Cohen was also involved in payments to Karen McDougal, a Playboy model who had also claimed she had a relationship with Trump. The president has denied the relationships.

Roberts drew on history to demonstrate that sitting presidents have been forced to provide information in criminal proceedings, starting with a subpoena to Thomas Jefferson in Aaron Burr's 1807 trial for treason. Chief Justice John Marshall ruled that the president could be subpoenaed.

"In the two centuries since the Burr trial," Roberts wrote, "successive presidents have accepted Marshall's ruling that the chief executive is subject to subpoena."

And in the Nixon and Clinton cases, the chief justice wrote, the court relied on Marshall's ruling.

Roberts wrote that it was of no moment that the earlier subpoenas were federal, while the one seeking Trump's documents came from a state prosecutor.

He rejected three of the president's arguments -- that such subpoenas would distract him from his duties, that he would be stigmatized, and that he would be subject to harassment from elected prosecutors around the nation.

There was little reason to think that a subpoena for records held by third parties would impose a significant burden on a president, the chief justice wrote. There is nothing "inherently stigmatizing," he added, about furnishing information relevant to a criminal investigation.

As for harassment, he wrote that the court had rejected a similar argument in the Clinton case, and that state and federal courts could address bad-faith investigations.

In dissent, Thomas also rejected the absolute immunity argument but said lower courts should give great weight to the possibility that the subpoena would prove distracting.

In a separate dissent, Alito wrote that the majority had stripped Trump of his most important defenses.

The subpoenas from congressional committees sought information from Trump's accountants and two financial institutions -- Deutsche Bank and Capital One -- about the hush-money payments, about whether Trump inflated and deflated descriptions of his assets on financial statements and about an array of financial records related to the president, his companies and his family.

Daniel Hunter, a spokesman for Deutsche Bank, said it would comply with the courts' ultimate rulings.

"Deutsche Bank has demonstrated full respect for the U.S. legal process and remained neutral throughout these proceedings," he said in a statement. "We will of course abide by a final decision by the courts."

In the decision on the congressional subpoenas, Roberts stressed the novelty of the question before the court. Earlier disputes between Congress and the president, he wrote, had been worked out by accommodation rather than litigation.

He wrote that the House had acknowledged "essentially no limits on the congressional power to subpoena the president's personal records."

Roberts said lower courts should assess whether the records were truly needed by performing "a careful analysis that takes adequate account of the separation of powers principles at stake, including both the significant legislative interests of Congress and the unique position of the president."

The six justices who voted with the chief justice in the New York case joined his opinion on the congressional subpoenas.

In dissent, Thomas wrote that "it is readily apparent that the committees have no constitutional authority to subpoena private, nonofficial documents." The House can seek information from the president only in connection with impeachment proceedings, he wrote.

The decision will give Democrats, including presumptive presidential nominee, Joe Biden, more ammunition in their attempts to raise ethical questions about a president who has fought relentlessly to keep his financial records out of the public eye, said Russell Riley, a presidential historian at the University of Virginia's Miller Center.

"In the short term, this sets aside the immediate problem of having to confront whatever it is in those records that Trump doesn't want people to see," he said. "But it also generates an additional vulnerability for Biden to exploit among that small group of people who may still be undecided."

Biden took to Twitter to retweet a post from last October in which he described himself as "one of the poorest men in government" during his decades-long Washington career. Biden has released 21 years of tax records, following the tradition of all major recent presidential candidates except for Trump.

"Mr. President, even Richard Nixon released his tax returns," Biden said in the video, which was originally posted during the House impeachment investigation into whether Trump pressured a foreign government to announce a probe of Biden's family. "Mr. President, release your tax returns or shut up."

Trump claims he will not release his tax returns due to a long-running audit by the Internal Revenue Service. He has argued that Democrats are only seeking his records for political reasons. He has described himself as the victim of a corrupt legal system that shields his opponents and continues to target him unfairly.

"It's a political witch hunt, the likes of which nobody's ever seen before," Trump told reporters Thursday, accusing former President Barack Obama and Biden of illegally spying on his campaign. "It's the biggest political crime in the history of our country."

Republicans used the ruling to continue their vocal defense of Trump, claiming that Democrats were more interested in investigating the president than solving the country's problems.

Rep. Jim Jordan of Ohio, the top Republican on the House Judiciary Committee, lamented that the court decisions were not the final word on access to Trump's records.

"For almost four years, Democrats have been singularly focused on attacking President Trump for political gain," he said in a statement. "Today's decisions by the Supreme Court sadly will not end the Democrats' partisan obsession. Americans around the country deserve better than the Democrats' never-ending political games."

Information for this article was contributed by Adam Liptak of The New York Times; by Mark Sherman and Zeke Miller of The Associated Press; and by Toluse Olorunnipa, Rachael Bade and John Wagner of The Washington Post. 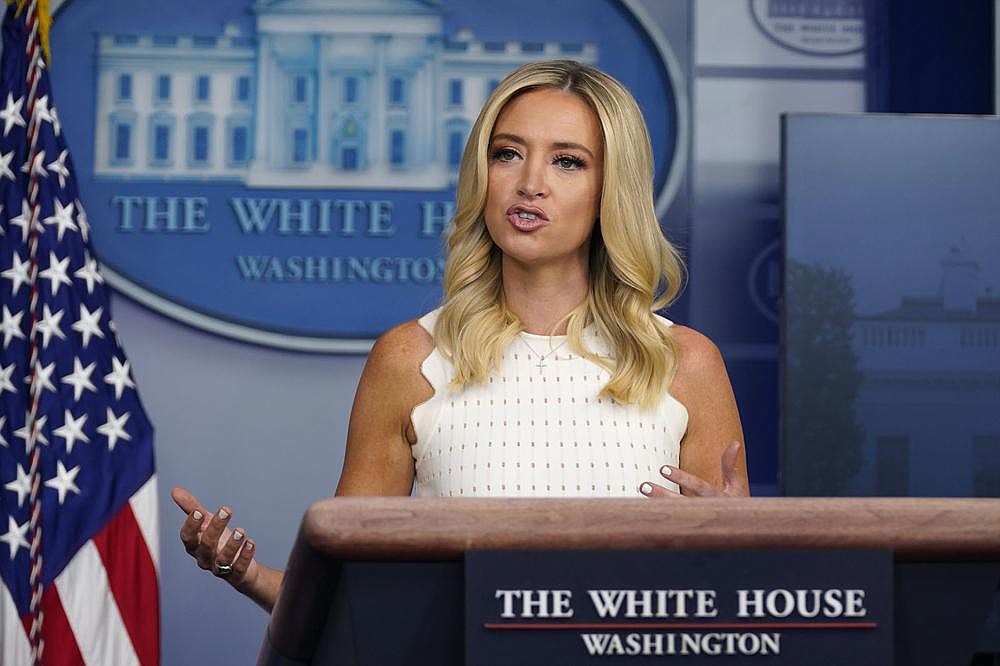 White House press secretary Kayleigh McEnany said in a statement Thursday that President Donald Trump was “gratified” by the Supreme Court ruling that sent House Democrats’ effort to obtain Trump’s financial records back to a lower court. “This is all a political prosecution,” Trump declared in a Twitter post. (AP/Evan Vucci)
ADVERTISEMENT