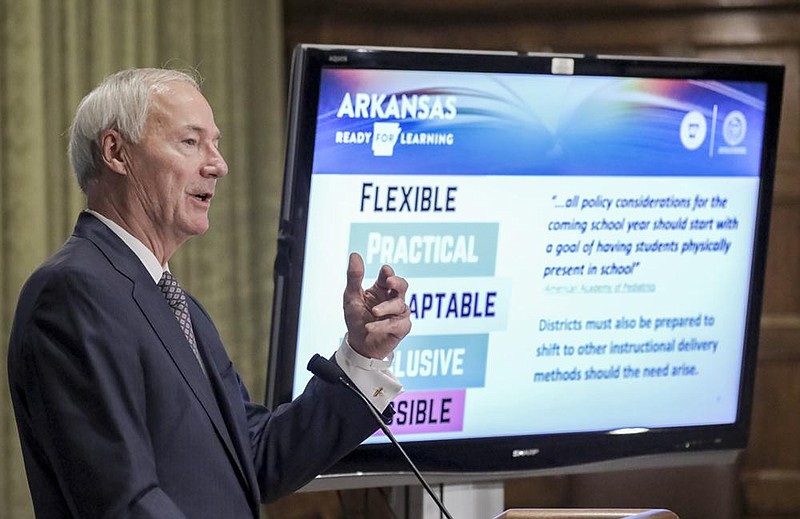 Governor Asa Hutchinson provided an update on the virus and the start date for public schools in the state. (Arkansas Democrat-Gazette/ John Sykes Jr.)

Gov. Asa Hutchinson said Thursday that he will delay the start of the school year for public schools by more than a week to give districts more time to prepare.

Instead of starting Aug. 13, he said the districts will be able to begin their school years as early as Aug. 24 or as late as Aug. 26.

He said the change would "give the school districts more time in order to make the adjustments necessary, to make sure their campus is ready, to make sure the teachers are prepared for the blended learning environment that we're going to be able to go through this year."

The increase of 806 cases Thursday was the second-highest number added to the state's total in a single day.

The number of Arkansans hospitalized with the virus rose by 36, to 394.

Eighty-two of the patients were on ventilators, up from 79 a day earlier.

The state death toll from the virus, as tracked by the state Department of Health, increased by four, to 309.

Hutchinson said he expected the state's cases to increase as testing picked up after slowing during the holiday weekend.

[Video not showing up above? Click here to watch » https://www.youtube.com/watch?v=-rrzU1zVtuc]

"Until we get a handle on it, as we increase testing it's not a surprise with these high numbers, but it is a reminder of the work we have to do," he said.

The number of cases in the state considered active, meaning the person had tested positive and had not yet recovered, increased by 206 to 5,751, as 596 Arkansans were newly classified as having recovered.

Also on Thursday, the Health Department announced that it had awarded a contract to the Arkansas Foundation for Medical Care in Little Rock to bolster the state's contract-tracing efforts.

The contracts call for each firm to supply the state with 350 contact tracers.

Although the Health Department at one time had about 200 employees assigned to the task, that number has been reduced to 88 as nurses were reassigned to conduct testing at local health units and work on compliance matters, said agency director Dr. Nate Smith.

Organizations such as Arkansas Blue Cross and Blue Shield have also volunteered a total of about 270 employees who are helping with the effort, he said.

At Hutchinson's daily news conference on the pandemic, he and Education Secretary Johnny Key also unveiled guidelines to help school districts respond to coronavirus cases and outbreaks once the school year begins.

The eight-page document groups the possible responses in three tiers, ranging from limited to critical, that depend on the number of cases found among employees and students; the level of absences among students and employees; and the level of transmission within the broader community.

Arkansas Education Association Executive Director Tracey-Ann Nelson called Hutchinson's announcement on the delayed start to the school year "a step in the right direction of acknowledging Arkansas is in no way ready to safely reopen our schools."

"The state's guidance on outbreaks in our schools is acknowledgment that we are attempting to send students and educators into an unsafe situation," the teachers union leader said in a statement.

"This danger is compounded by the states' lack of coordinated guidance to districts as they attempt to plan amid constantly changing guidelines that have somehow become politicized.

"While some decisions may be more appropriately made at a local level, this virus does not know school district boundaries. There must be a detailed statewide plan that anticipates a number of scenarios to ensure student and school employee health and safety."

The state has issued recommendations for school districts on how they should prepare for the school year but hasn't mandated specific precautions, such as a requirement for employees or students to wear masks.

Titled "Response levels for on-site learning," the document issued Thursday recommends practicing physical distancing to the extent possible, face coverings for students and employees, good hand hygiene and frequently disinfecting surfaces regardless of the level of transmission within the school or community.

Although school districts have been advised to create plans for the coming year, they will not have to submit them to the state for approval, Key said.

He said the delay will give school districts extra time to obtain protective equipment and technology for online instruction.

The Education Department will also work with "partner organizations" to hold training sessions for districts in preparation for the year, he said.

"We are confident from our conversations that many districts will be ready to go on Aug. 13," Key said. "However, recent feedback from educators, from administrators, from parents and from legislators has indicated urgent but reasonable concerns about the readiness of some districts to return to instruction on that date."

According to the guidance document issued Thursday, school districts should designate an employee to serve as a liaison with the Health Department.

When an employee or student tests positive for the virus, the employee should contact the Health Department, help identify people who had been near the infected person for an extended period of time and direct those people to quarantine at home for 14 days.

Schools should initiate a "limited response" to people who have been infected within a school building when there is "limited spread within the school and/or community."

"At this level, the percentage of staff and students affected will not alter the delivery of district-wide on-site instruction and special services," the document says. "Leadership should determine whether a grade span, school, department, a single classroom, etc. needs to briefly pivot to remote operations while contact tracing and disinfecting take place.

"Closing the entire district is not needed at this level of response."

The document calls for a "moderate response" to "moderate community spread and increasing levels of student and staff active cases, including evidence of linked cases within the school setting" as determined by the Health Department.

In that case, a district could temporarily close a school, multiple schools or the entire district to on-site instruction.

Other possible steps include canceling certain extracurricular activities, staggering student schedules to reduce the number of them on campus at one time, serving meals in classrooms and banning visitors.

A "critical response" is needed in the event of "substantial school and/or community spread" of the virus, as determined by the Health Department.

"At this level, the percentage of staff and students affected substantially disrupts the delivery of on-site instruction and special services to the extent a districtwide closure may be expected for an extended period of time, but will be determined in collaboration with" the Health and Education departments, the document says.

Also on Thursday, Little Rock School District Superintendent Michael Poore clarified that wearing masks will be "expected," although not required, of students.

A day earlier, the state-controlled district published a "frequently asked questions" document for employees that said, "When feasible, older children should wear face coverings within facilities. It is not required for children to wear a mask. Let the parent determine!"

"All of our previous documentation has shared that we expect ... everyone to be wearing face masks," Poore said. "That's for students and for staff and for anyone that might have to come on campus."

Schools will provide masks to students and teachers at the beginning of the school year and will have backup masks in case somebody forgets theirs, he said.

He said teachers will be able to tell students to wear their masks, but he doesn't want to make it a "discipline" issue.

If a student refuses to wear a mask, "we're going to work with that student so that they understand why they need to have their mask on, and we will work with the parent of anyone that does not want to wear a mask and talk to them about that."

He said the wording in the "frequently asked questions" document came from a state website.

"Our mistake was that we did not use our own language" on the mask expectation, he said.

He said a revised version of the document will be posted today.

The district also plans to release its reopening plan Monday, he said.

At the state Capitol, Secretary of State John Thurston's office posted notices at each of the entrances to the building Wednesday directing people to "please wear a mask in common areas."

"We are encouraging masks to be worn in the common areas as a precautionary measure and when social distancing is not possible," Thurston spokesman Kevin Niehaus said Thursday.

He said that Thurston, a Republican, isn't requiring masks in the Capitol because "we are following the Health Department and the Governor's suggestions."

The cases added to the state's total Thursday included 104 in Pulaski County, 78 in Washington County, 56 in Sebastian County, 49 in Benton County and 51 in Faulkner County, Smith said.

Among prison and jail inmates, the state's tally of cases increased by 110. That number can reflect new cases as well as ones that were added to the statewide total earlier but were newly classified in a Health Department database as being among prison inmates.

At the Ouachita River Unit in Malvern, the number of inmates listed in Health Department reports as having tested positive increased by 162, to 679.

Cases among inmates increased by 31, to 822, at the East Arkansas Regional Unit near Brickeys.

The number of cases among inmates increased by one, to two, at the North Central Unit in Calico Rock; and by one, to six, at the Grimes Unit in Newport.

Among cities, Springdale on Thursday had the largest number of active cases, 641, that were not among prison inmates, Smith said.

A Health Department report Monday listed 45 active cases in the Yell County town among workers at a Wayne Farms chicken plant, along with 115 other workers at the plant who had recovered.

By contrast, Little Rock had just 21 active cases per 10,000 residents.

He said he hopes people living in a city with a large number of active cases "take some extra precautions if you're not already doing so." 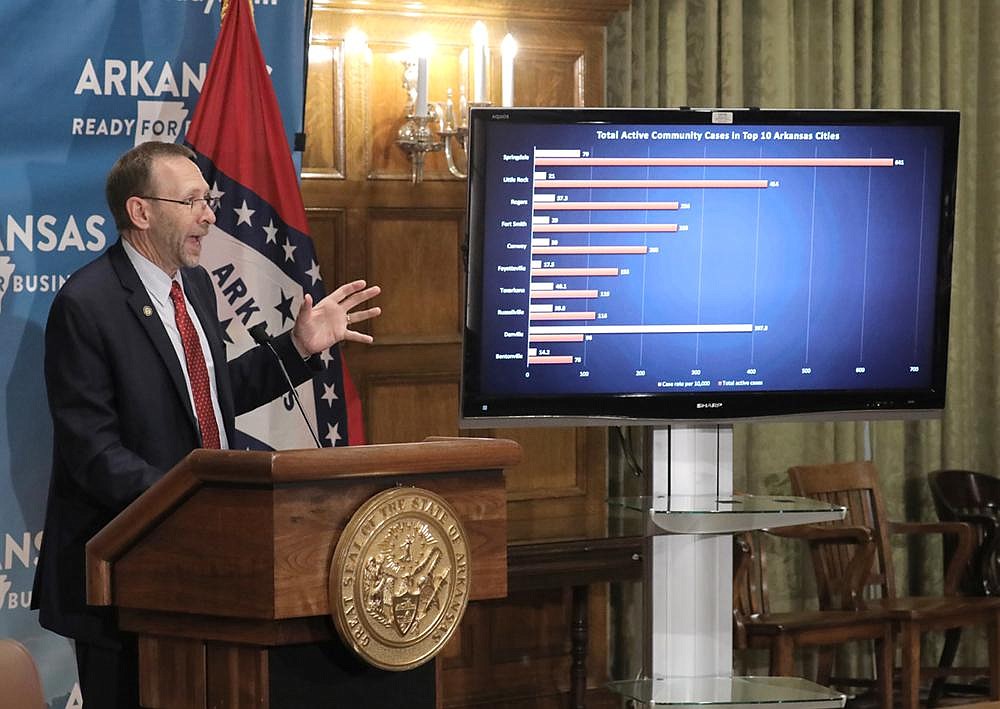 Arkansas Secretary of Health Nate Smith talks about the number of coronavirus cases in the state during Thursday’s briefing. (Arkansas Democrat-Gazette/John Sykes Jr.) 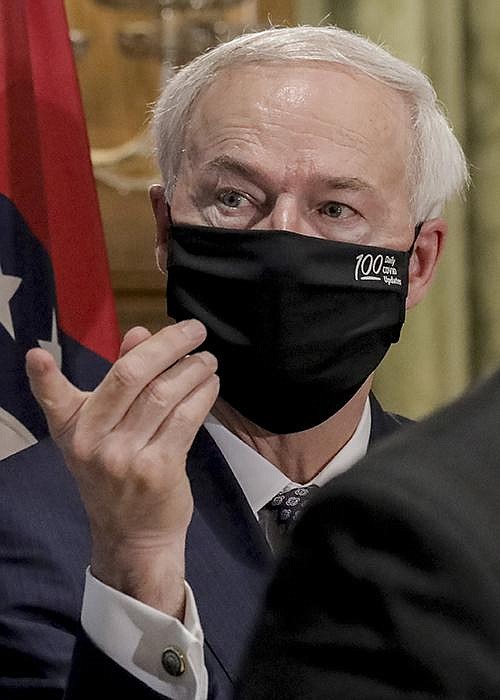 The rise in coronavirus cases “is a reminder of the work we have to do,” Gov. Asa Hutchinson said Thursday as he announced the delay in the start of school. More photos at arkansasonline.com/710gov/. (Arkansas Democrat-Gazette/John Sykes Jr.) 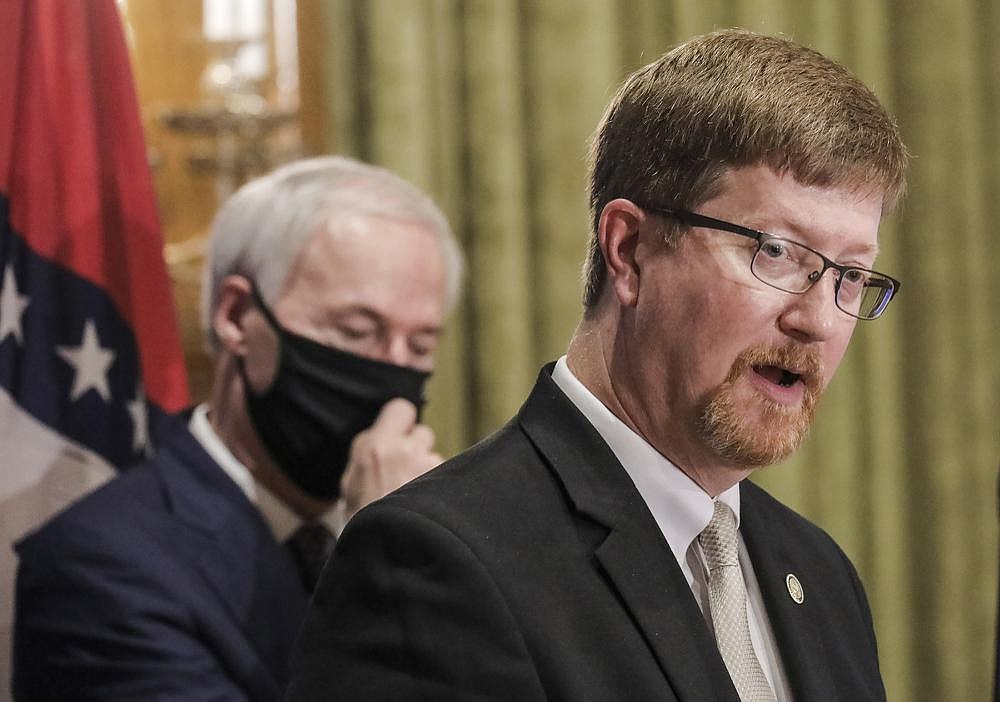 State Education Secretary Johnny Key said Thursday that although school districts have been advised to create plans for the coming year, they will not have to submit them to the state for approval. (Arkansas Democrat-Gazette/John Sykes Jr.) 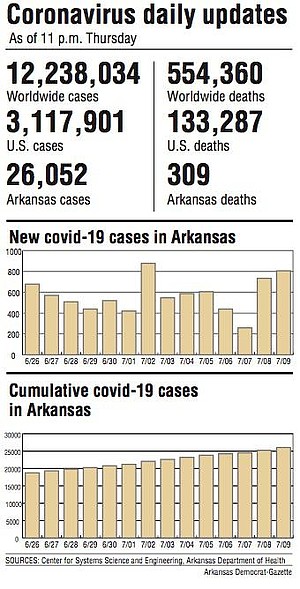