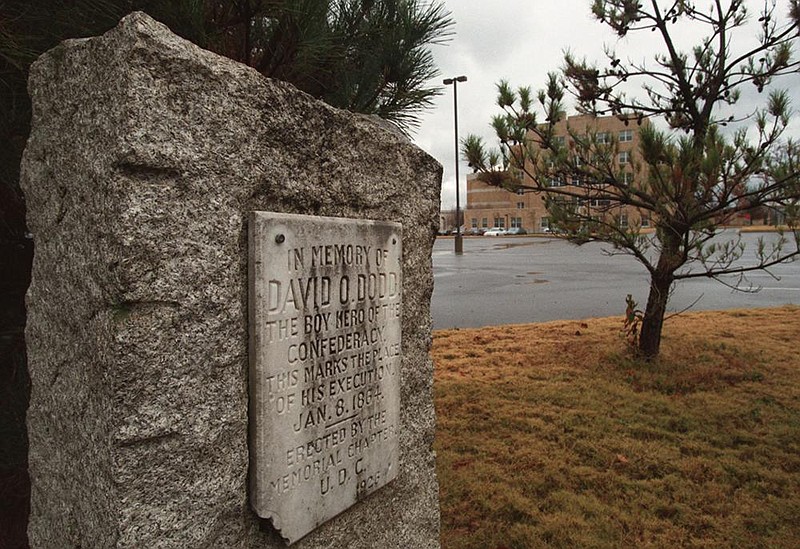 This historical marker on the University of Arkansas at Little Rock William H. Bowen School of Law campus, shown Jan. 2, 1999, remembered David O. Dodd, who was executed Jan. 8, 1864. The monument was removed last month by the city. (Arkansas Democrat-Gazette/Staton Breidenthal)

Dodd was a 17-year-old who was hanged as a spy by the Union Army in Little Rock in 1864 and has been called "the boy martyr of the Confederacy."

The two markers were removed for the same reasons Mayor Frank Scott Jr. had a bronze statue of a lone Confederate soldier removed from the park last month, said Stephanie Jackson, the mayor's spokeswoman.

Scott said in a statement June 18 that the monument to the Civil War militia unit from Pulaski County, known as "Memorial to Company A, Capitol Guards," did not contextualize the painful legacy of the soldiers' actions, nor the racial oppression of the Jim Crow era.

The mayor said parks belong to every Little Rock resident and it is his administration's intent to ensure they are "inclusive and welcoming for all."

A request from the Arkansas Democrat-Gazette for the number of complaints or any written communication the city had received about the markers related to Dodd or the statue of the soldier had not been fulfilled as of Thursday evening.

Removal of the Capitol Guards monument came at a time when numerous Confederate statues around the country are being removed from public property amid a national conversation about racism after the death of George Floyd.

Floyd, a Black man, died May 25 while being restrained by Minneapolis police officers. Video of his arrest shows him on the ground with a white police officer's knee pressed against his neck for almost 9 minutes.

Jackson said the Dodd marker and bench were removed June 26. Both Dodd markers and the Capitol Guards monument are in storage, she said.

The Arkansas chapter of the group had not responded to an email seeking comment about the marker's removal as of Thursday evening.

In the early 1960s, the monument was relocated because of interstate construction and placed in an area that is now part of the University of Arkansas at Little Rock's William H. Bowen School of Law, according to information provided by the city.

In the mid-2000s, Truman Tolefree, director of the city's Parks and Recreation Department at the time, approved moving the marker behind the military museum "to allow for better and safer accessibility."

Dave Gruenewald, a board member of the nonprofit that supports the MacArthur Museum of Arkansas Military History, said he volunteered to put together information for a plaque that was put next to the marker to contextualize it, which also has been removed.

Gruenewald said Thursday the plaque related the historical facts of Dodd's story. He said Dodd was not a Confederate soldier, but a boy who was traveling from Camden to Union-occupied Little Rock on family business and traded military information to Confederate generals for passage over Confederate lines. Gruenewald added that the plaque included a sentence referring to Dodd as "the boy martyr of the Confederacy."

"I wish I hadn't put that sentence there, but that was a fact," he said. "I just feel that the plaque just reported a story that happened. I don't think it was sympathetic to the Confederacy, but simply reported a historic event."

Dodd was raised to heroic status in the post-Civil War years with the growth of "Lost Cause" ideology, according to the Central Arkansas Library System's Encyclopedia of Arkansas. The "Lost Cause" is a set of ideas about the history of the South that developed after the Civil War and that Southerners advanced featuring defenses of slavery, secession and the war. Historians largely consider those ideas to be false.

Gruenewald said Dodd's story is a sad one about a boy who got caught up in the events of the war, and that perhaps the marker could be placed at Dodd's grave site in Mount Holly Cemetery.

The city also removed from the park a concrete bench that was dedicated in 1936 and has an inscription that reads, "By the Children of the Confederacy of the Arkansas Division in memory of the youth of the State of Arkansas who gave their loyal service to the cause of the Confederacy in the War 1861-1865."

The bench had been relocated behind the museum in 2011 as part of a broader effort to assemble various monuments throughout the park in that area, the city said.

The MacArthur Museum of Arkansas Military History located in the park is also home to a stained-glass window that depicts Dodd. The window has been a part of the museum's Civil War gallery since 2004 and is on long-term loan from the American Civil War Museum in Richmond. There are no plans to remove it, Jackson said.

On June 19, Jackson said there were no other Confederate monuments in the city's purview for which removal was being considered. The Dodd markers were removed seven days later.

Dodd is also the namesake for an elementary school in southwest Little Rock, as well as a road that stretches through the west-central part of the city.

Phillip McMath, a local attorney and the author of a play, a documentary and multiple articles about Dodd, said he became interested in Dodd's story because of its narrative drama. Dodd was caught in the crossfire of political intrigue involving a farcical trial and a Union general who was trying to prove that he wasn't being too conciliatory to the South, he said.

McMath said he felt that the marker at Dodd's execution site was different from the statue of the soldier. He said the statue was an act of propaganda, while the granite monument was a commonplace historic marker with factual information seen all over the United States.

"It's not like it's a man on a horse, some kind of romantic assertion of an opinion, someone who they think is a great man. It's not like that," he said. "It's just a simple historical fact that's on a rather diminutive plaque. If we do that, we might as well take them all down, close the battlefields, close the museum."

But John Kirk, the George W. Donaghey Distinguished Professor of History at the University of Arkansas at Little Rock, pointed to the time frame that many of the markers commemorating Dodd were put up and said they fit into the larger context of efforts to advance the "Lost Cause" ideology.

"A lot of the monuments, they were created a long time after the end of the Civil War, so they're very much connected to the age of segregation," he said.

Those markers reframe past events rather than commemorating contemporary ones, Kirk said, minimizing the idea that the Civil War was about slavery. Monuments are one way to provide a justification for the present political system, Kirk said, and in the early 1900s they were a way to mandate segregation, since Black people did not have a political voice.

Kirk added that those markers raise questions about which history is commemorated and which isn't.

"There are many markers that we could put on many spots of historical significance. The question is: Why do we privilege certain historical events and choose to commemorate them?" he said.