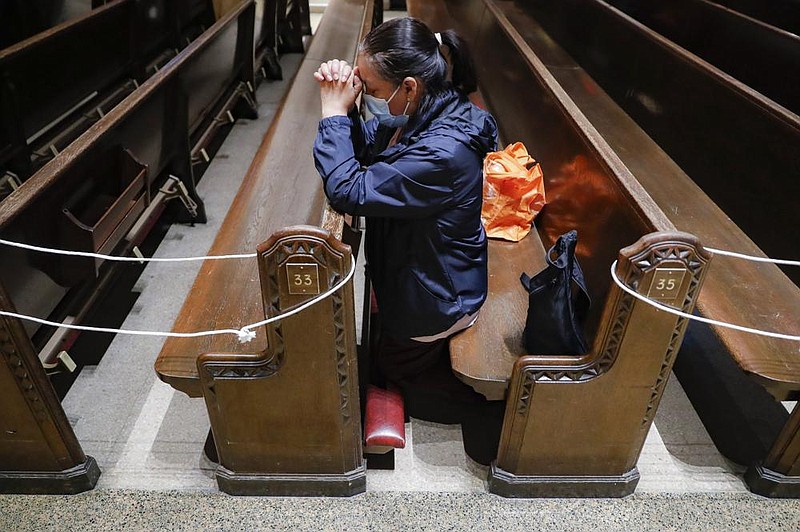 NEW YORK -- The paths of two New York churches diverged this week -- one reopened and one stayed closed. But they have shared a tragic fate, together losing at least 134 members of their mostly Hispanic congregations to covid-19.

Saint Bartholomew Roman Catholic Church in Queens -- where at least 74 parishioners have died from the virus -- on Monday hosted its first large-scale in-person services since mid-March: an English-language midday Mass and a Spanish one in the evening. At Saint Peter's Lutheran Church in Manhattan, with a death toll nearly as high, the pastors say it's too risky to open any time soon.

In Saint Bartholomew's, which normally can hold 800 people, every other row of pews was roped off to facilitate social distancing as about 60 worshippers attended the English service. Except for an infant, all wore face masks.

"It's great to see you again -- you should give yourselves a round of applause," said the pastor, the Rev. Rick Beuther.

He prayed for the parishioners who recently died and assured those present that God's love for them "is a bond that can never be broken, even in tragic situations."

Beuther had set the tone for the service beforehand, on the church's Facebook page. "This will not be a celebratory opening," he said. "This will be a slow start out of an abundance of caution."

Caution also is the watchword at Saint Peter's, which serves churchgoers from across the city, but with a different result. It is still not ready to set a date for resuming in-person services while a parish task force, advised by experts, studies how to reopen safely.

Saint Peter's officials say 60 members of the congregation -- which numbered about 800 before the pandemic -- have died of covid-19, almost all of them part of the community of some 400 who attend services in Spanish.

Under city guidelines, Saint Peter's could have reopened this week for 125 people at a time, or 25% of capacity. But senior pastor Jared Stahler said that would be irresponsible given uncertainties about health risks.

"For a church that has lost so many people, it would be a moral violation to go ahead and reopen right now," he said. "We would give people a false sense of comfort."

At both churches, pastors remain deeply concerned for the well-being of their parishioners, many of them immigrants living in the country without legal permission and lacking access to health care. Some lost jobs; others risked their health to work because they couldn't afford to shelter at home without getting paid.

"They've been through a nuclear-like experience. ... Most of their families are in another place, and they're coming to a church again that is like their second home," Beuther said.

Among those in the pews at Saint Bartholomew's on Monday evening was Claudia Balderas. Above all, she came to pray for her 63-year-old brother, Porfirio Balderas, who died May 12 from coronavirus complications.

"This is a special place that helps me a lot," said Balderas, 51, who also contracted covid-19 and was hospitalized for weeks.

Balderas said lockdown restrictions kept the family from having a funeral for Porfirio, and they couldn't afford to send his ashes to their native Mexico. Instead, relatives in the city of Atlixco placed a wooden cross carved with his name next to his mother's grave; the ashes are in an urn with his wife.

Saint Bartholomew's known covid-19 death toll among parishioners is 74, a count based on emails from community members since March. But Beuther said they haven't spoken with everyone in the large congregation, and he fears dozens more may have died.

"As we begin to open, the impact will become clearer," he said. "It will be tsunami-like in terms of deaths, sicknesses, and especially for the undocumented, those who haven't been able to return to work and need food."

On Sunday evening, for the first time since the pandemic took hold, Saint Peter's relaunched online its decades-old tradition of "jazz vespers," in which Stahler's reading of the liturgy was backed by a bass player and jazz singer.

"Saint Peter's Church has been a holy example of how our buildings may be closed, but our church has always been open," said Bishop Paul Egensteiner, who oversees New York-area congregations of the Evangelical Lutheran Church in America.

Stahler and fellow pastor Fabian Arias depicted the planning for Saint Peter's future reopening as "step-by-step, health-focused and data-driven," studying safety measures such as attendance limits, new protocols for entry, even removing some furniture that might tempt people to congregate.

"If there is anything we have learned from this pandemic," the pastors said in a joint message to the parish, "it is that we are only as well as the most vulnerable in our midst."

Arias said many who lost loved ones to the virus hope to have funerals in the church after it reopens. For now, he has been offering prayers for the deceased during online services every Wednesday and Sunday.

The pandemic has hit families that are among the most active in Saint Peter's. Parish secretary Alejandra Mendez, for example, lost her father and brother, both church members, as well as her aunt.

"We've not been able to be together and mourn the loss collectively," said the congregation's president, Christopher Vergara.

At Saint Bartholomew's, one of the staff members on the front lines has been Sister Lucy Mendez, who runs the religious education program. When Claudia Balderas was hospitalized, the nun sent her spirit-boosting text messages.

"I told her that we were with her, that we're praying for her," Mendez said.

Mendez herself became infected and at one point feared she was going to die. She recalled the relentless heartbreak as she and other staff members learned of so many parishioners being hospitalized, with families unable to visit them as the pandemic raged.

"It was very painful," Mendez said.

On Monday she welcomed people back to Saint Bartholomew's with a broad smile under her mask -- and squirts of sanitizer on their hands.

Information for this article was contributed by Jessie Wardarski of The Associated Press. 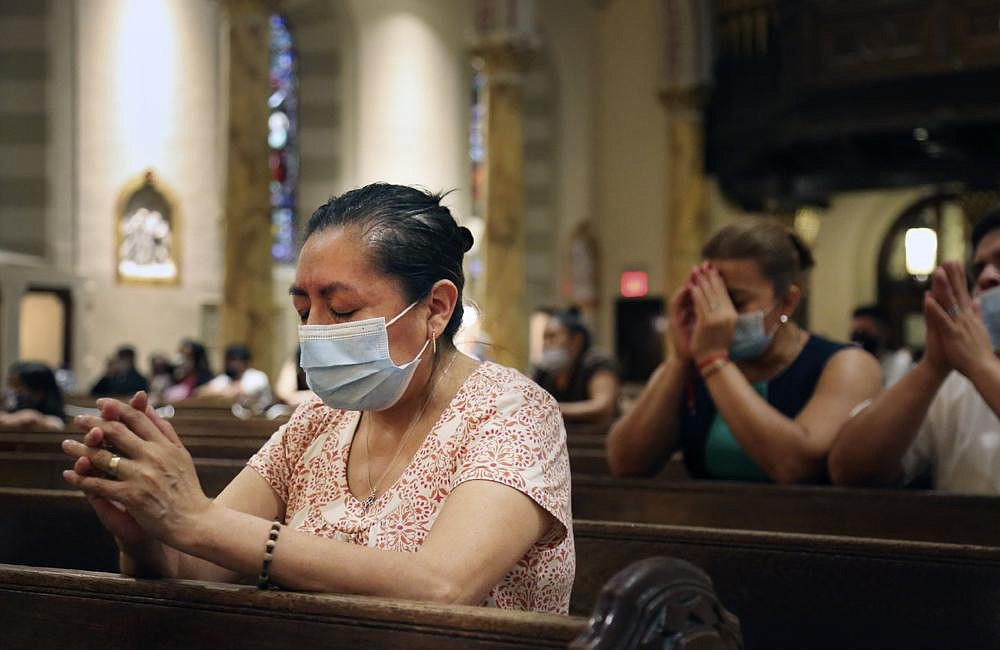 Claudia Balderas, 51, prays for her brother, who died from covid-19 in May, on Monday, while attending the fi rst in-person Mass in almost four months at the Queens, N.Y., Saint Bartholomew Roman Catholic Church. (AP/Jessie Wardarski) 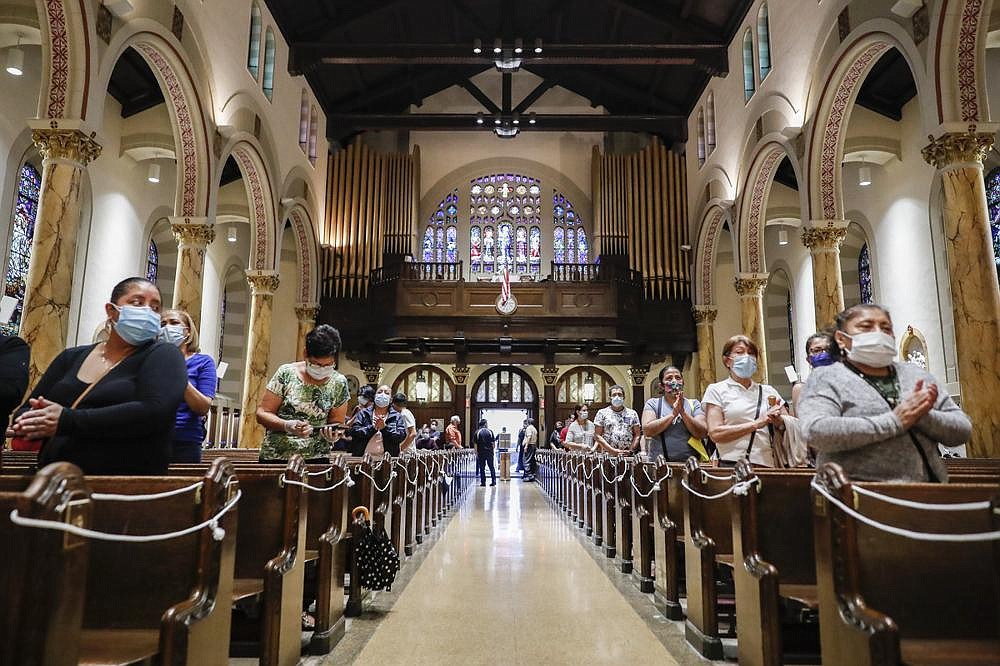 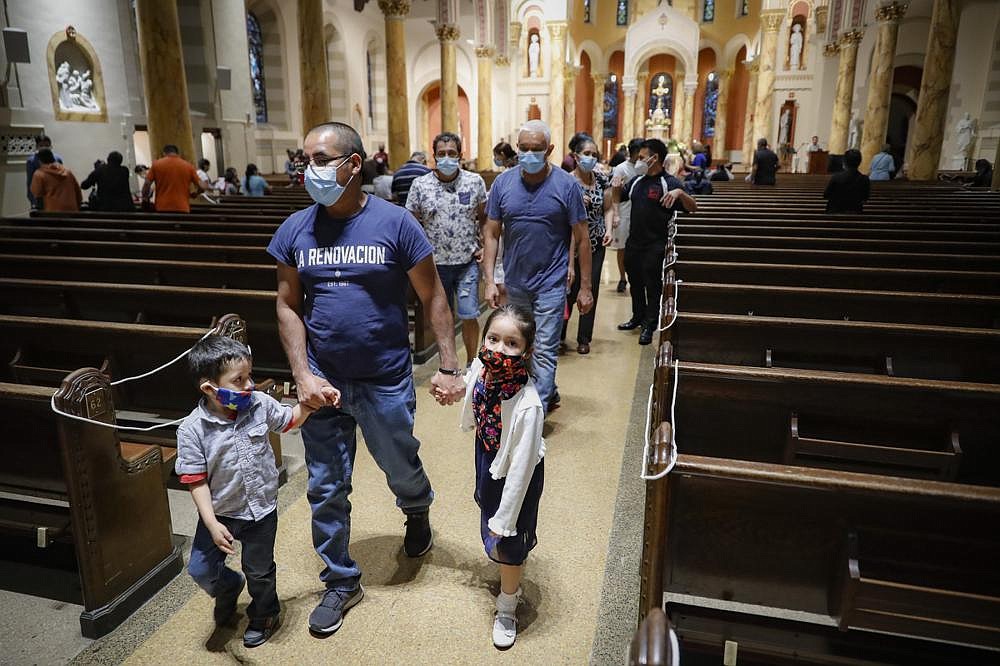 Parishioners leave at the end of a Spanish-language Mass at Saint Bartholomew Roman Catholic Church in the Queens borough of New York. (AP/John Minchillo) 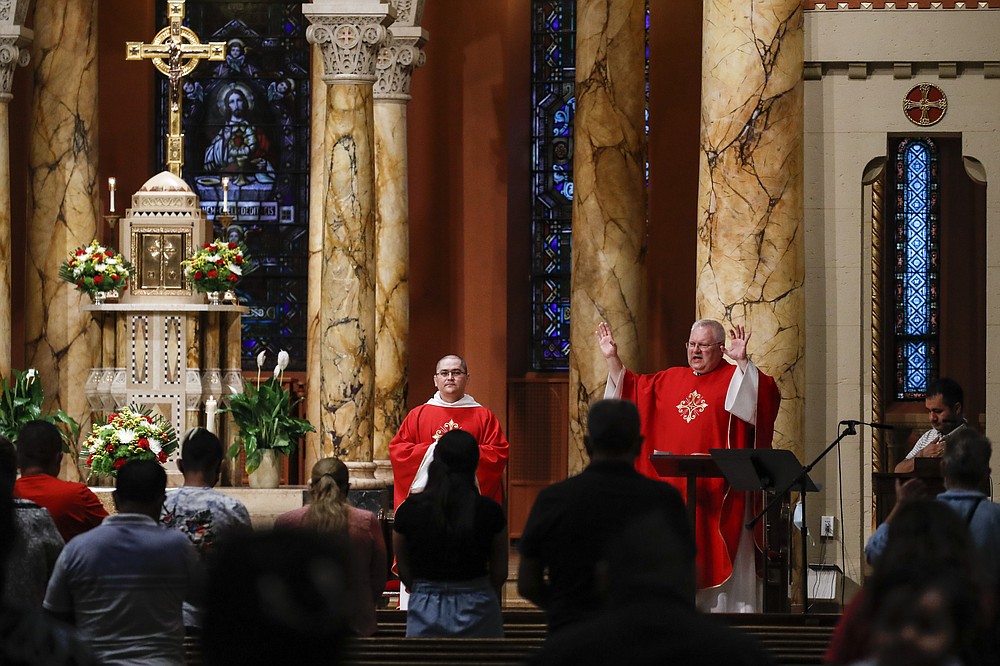 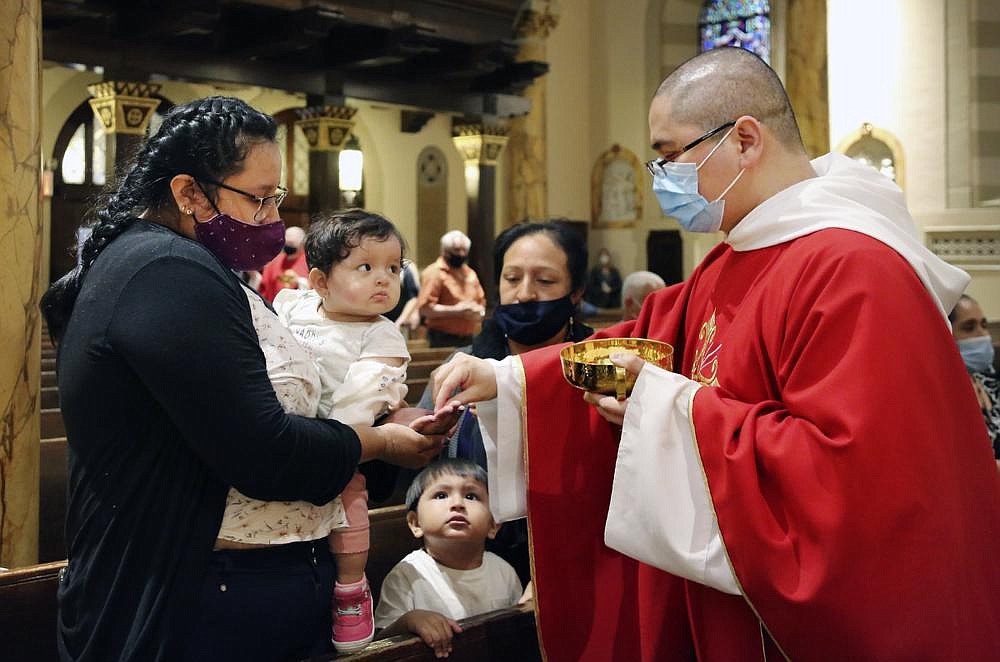 Parishioners receive the sacrament from the Rev. Luis Gabriel Medina during Communion at Saint Bartholomew Roman Catholic Church in the Queens borough of New York on Monday. (AP/Jessie Wardarski) 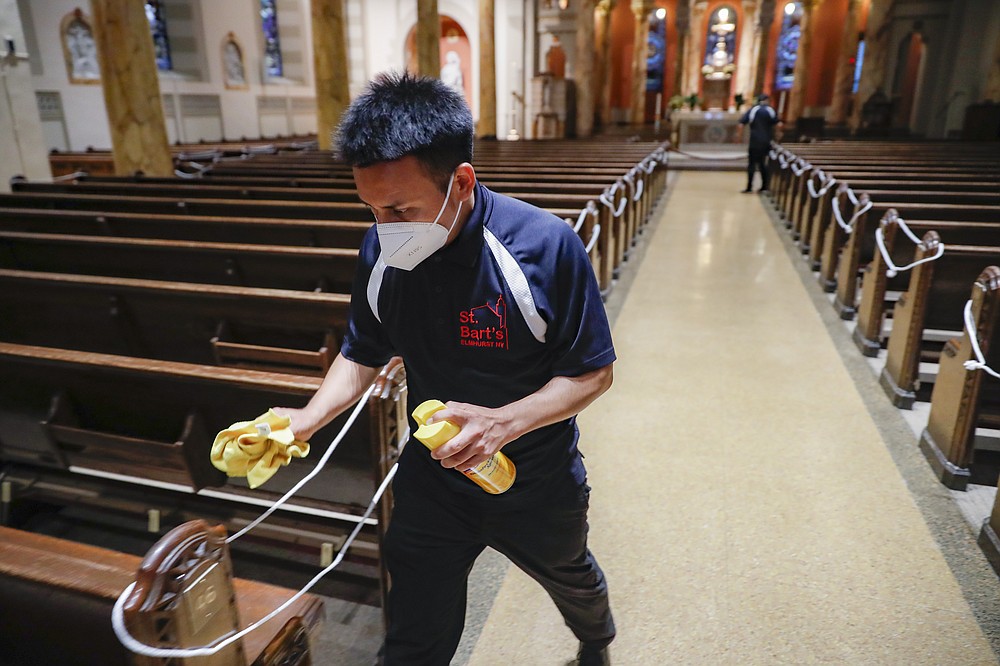