WATCH YOUR LANGUAGE! Use initialisms sparingly to prevent snafus 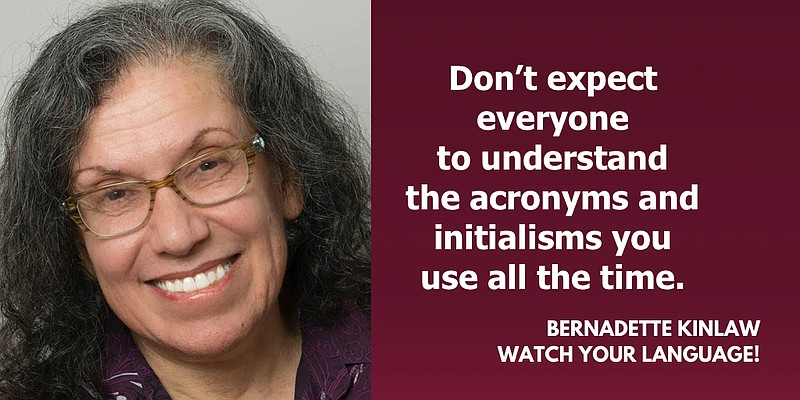 I often remove unwieldy acronyms from articles I'm editing. The writer might assume that all readers know that acronym, but that often isn't so.

Webster's New World College Dictionary defines an acronym as a word formed from the first letter or letters in a series of words. Often an acronym forms a word such as scuba, which is short for "self-contained underwater breathing apparatus."

Another kind of acronym is an initialism, which provides the initials you say to shorten the name.

Many acronyms are easily recognizable because we start hearing them shortly after birth.

◼️ D.C. for District of Columbia

◼️ MPH for miles per hour

Some could seem familiar to those in a certain line of work.

Do non-police officers know that an APB is an all-points bulletin for when a person is being sought?

In Virginia, students must take SOLs, which stands for Standards of Learning exams. I'll bet lots of people know an utterly different meaning for that acronym.

Do people not involved with Alzheimer's disease know that PWD is a person with dementia?

Some acronyms become familiar by appearing in the news for a while. Right now, many people probably know that PPE stands for personal protective equipment.

And, we have covid-19. This might not be a pure initialism, because not only the first letters of the words are adopted. Covid-19 is short for "COronaVIrus Disease 2019." It's similar to radar, which stands for "RAdio Detection And Ranging."

In recent years, we've learned that ICE stands for Immigration and Customs Enforcement.

During the Persian Gulf War, we learned that IEDs were improvised explosive devices and SAMs were surface-to-air missiles.

Some initialisms are so familiar that we never say the full names. When was the last time you heard someone call the CBS TV station the Columbia Broadcasting System?

Many companies have tried to rebrand their businesses by changing names, sometimes to initialisms. In 2018, Weight Watchers, which has been around since the 1960s, decided to become WW. The reason for the change, the company said, was to emphasize complete wellness and not simply weight loss. I found the name change funny because it took twice as long to say. In response to the change to the longer name, one person on Twitter wrote, "Maybe that burns more calories or something?"

Another funny person on Twitter wrote, "I'm not sure 'double you, double you' is the right slimmed down message."

Hard to argue with that.

Other jumps to shorter names make sense. The already slimmed YMCA (for Young Men's Christian Association) became simply the Y a decade ago. Everyone I knew was calling it the Y already. National Public Radio, which most people already called NPR, officially changed its name to NPR.

The Scholastic Achievement Test used to be the full name for the SAT that you take to get into colleges. Now, its official name is SAT.

PricewaterhouseCooper became PwC, and I will never adjust to their not using an uppercase W.

I have given up on trying to remember four-letter initialisms. Accounting firm Peat Marwick became KPMG, for Klynveld Peat Marwick Goerdeler. I doubt I could have remembered those four names, but I for sure wouldn't remember KPMG.

VRBO is a business that helps people find vacation rentals. When they first started advertising on TV, they used the initials: V-R-B-O. In those days, I was still contemplating long weekends out of town. I can't count the number of times I tried to look up VRBO but had forgotten the initials. I felt vindicated a few months later when the company changed the pronunciation to Verb-oh. (At the same time, the company changed its logo to an almost seizure-inducing font, but that's a topic for a different venue.)

So, I asked some friends to reveal to me some initialisms that are specific to their professions.

People who work in natural health circles use SAD to shorten "standard American diet." Others use SAD for "seasonal affective disorder."

A winery owner says GSM is a popular wine blend: Grenache, Syrah and Mourvèdre. It also happens to stand for "Global System for Mobiles."

SOB in the health field means "shortness of breath." I believe I've heard that in another context.

The part of Virginia where I used to live was called Hampton Roads, and HRT (Hampton Roads Transit) is the public transportation system. A lot of people know HRT as "hormone replacement therapy" instead.

In Seattle, people ride a trolley called the South Lake Union Trolley. Yes, people there call it the SLUT.

And this one is crazy. Two unions merged to form one. They were the Union of Needletrades, Industrial and Textile Employees and the Hotel and Restaurant Employees. Now, the group is UNITE HERE! (The exclamation point is theirs, not mine.)

So, this is what I'm trying to say: Avoid acronyms and initialisms when you can. Never assume that people know what you're talking about when you use one. Even when you take the time to spell out the initialism, the listener or reader might not remember that meaning later.