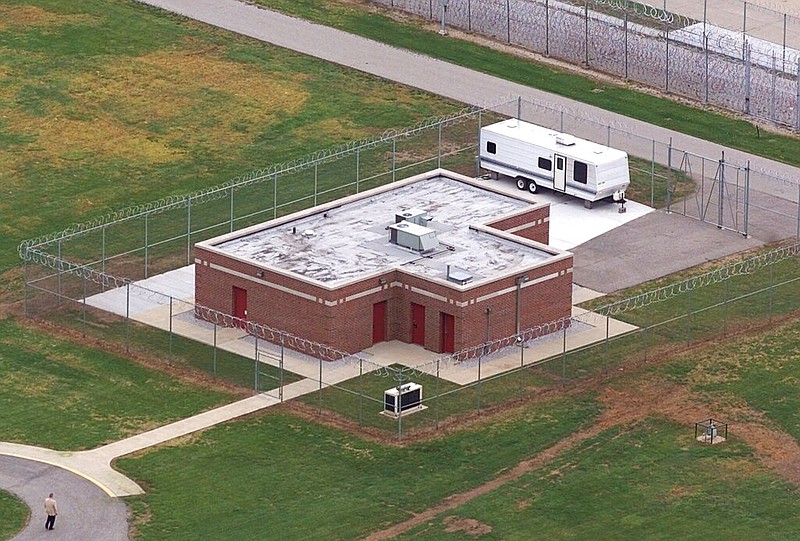 The execution facility at the United States Penitentiary in Terre Haute, Ind., is shown in this June 11, 2001, aerial file photo. President Donald Trump's administration wants to restart federal executions this month at the Terre Haute prison after a 17-year hiatus, starting with Daniel Lee, convicted in Arkansas of the 1996 killings of gun dealer William Mueller; his wife, Nancy; and her 8-year-old daughter, Sarah Powell.

TERRE HAUTE, Ind. -- The Justice Department has been given the green light to execute its first death row inmate in more than 17 years now that an appeals court on Sunday overturned a federal judge's order to halt the execution of a man convicted in the 1996 slaying of an Arkansas family of three.

Daniel Lewis Lee, 47, is scheduled to die by lethal injection at 4 p.m. today at the U.S. Penitentiary in Terre Haute, Ind.

Lee and his accomplice, Chevie Kehoe, murdered William Mueller, 52, his wife, Nancy, 28, and her 8-year-old daughter, Sarah Powell, inside their Tilly-area home on Jan. 11, 1996.

Kehoe, despite being identified in testimony as the ringleader and the girl's killer, received a life sentence while Lee got the death penalty. It was a result that confused the victims' family, many of whom have since publicly spoken against the government's desire to execute Lee.

Late last week, it appeared the family was successful in delaying the execution for covid-19 reasons. But on Sunday, roughly 24 hours before Lee's scheduled execution, the 7th U.S. Circuit Court of Appeals in Chicago overturned the stay.

"They raise health concerns due to age, underlying medical conditions, the need to travel interstate to reach the Terre Haute prison and the current degree of COVID-19 spread throughout the country," a court document stated.

Veillette told the Arkansas Democrat-Gazette that her grandmother, Peterson, suffers from a heart ailment and her doctor had advised her not to travel the 550 miles from Hector to Terre Haute.

Their attorney, Baker Kurrus, released a written statement shortly after the appeals court ruling was announced.

"Because the Government has scheduled the execution in the midst of a raging pandemic, these three women would have to put their lives at risk to travel cross-country at this time," he said. He added that the women vowed to appeal the decision to the U.S. Supreme Court.

"My clients hope the Supreme Court and the federal government will respect their right to be present at the execution and delay it until travel is safe enough to make that possible," Kurrus said.

In the 7th Circuit Court of Appeals ruling, Chief Judge Diane Sykes stated that the plaintiffs' claims lacked "any arguable legal basis" and was "frivolous."

Sykes, of Milwaukee, is joined on the court by judges Frank Easterbrook of Chicago and Amy Coney Barrett of South Bend, Ind.

In the written ruling, Sykes went on to explain that part of the reason the plaintiffs' motion was frivolous was because they have "no statutory or regulatory right to attend the execution," which indicated that the court rejected the plaintiffs' fundamental argument that they were forced to make a choice between risking their health and exercising their rights.

As it turns out, Veillette told the Arkansas Democrat-Gazette in an email Saturday that she was likely not going.

"It is just too risky to travel right now," she said.

As of Sunday, the Centers for Disease Control and Prevention reported there have been more than 3.3 million cases of covid-19 across the country since the start of the crisis in February. More than 135,000 people in the United States have died from the virus.

Hours before the appeals court announced its ruling Sunday, the federal Bureau of Prisons confirmed that a staff member who was involved in the preparation of the execution chamber had tested positive for covid-19.

The Justice Department said the worker had not actually been inside the chamber, nor had he come in direct contact with anyone on the specialized team sent to the prison to carry out the execution, according to the Associated Press.

On June 11, 1996, Lee and Kehoe entered the Mueller home dressed as federal agents. The family wasn't home, so the intruders hid inside the house and waited.

When the family returned home, Kehoe and Lee told Mueller, his wife and stepdaughter that they were federal agents and they were there to raid them. They bound the victims' wrists and ankles and then asphyxiated them using plastic bags and duct tape. Afterward, they attached rocks to their bodies and dumped them into the Illinois Bayou near Russellville.

The killers also stole cash, weapons and other supplies from the Mueller property. Kehoe planned the robbery to help fund a whites-only nation that he wanted to start in the Pacific Northwest. Lee was going to be one of his top associates, investigators said.

The bodies of the victims were not discovered until more than five months later when a woman who was fishing under a bridge snagged a pair of shoes with her line and hook.

She noticed a leg bone stretching out of one of the shoes and called 9-1-1. The Pope County sheriff's office searched the bayou and found the remains of Mueller, his wife and her daughter.

Kehoe and Lee wouldn't be caught until the next year.

Investigators learned that Kehoe was involved in a robbery of the Mueller home in 1995, one year before the killings. Weapons stolen from the home in both robberies were found in various places -- a pawn shop in Seattle, inside a white supremacist's car in South Dakota, and in the woods near a white supremacist's cabin in Idaho, according to court documents.

The men in South Dakota and Idaho had connections to Kehoe. The one arrested in South Dakota had a Bushmaster rifle that had been reported stolen from Mueller's property, authorities said. He told detectives that Kehoe had sold it to him.

Kehoe was nearly captured in February 1997 in the area of Wilmington, Ohio.

He, along with his younger brother, Cheyne, were traveling in a blue Chevrolet Suburban with expired, out-of-state tags when they were pulled over by a two police officers.

Cheyne Kehoe exchanged gunfire with the police officers who pulled over his brother. He ran away and Chevie Kehoe drove away. Moments later, the older Kehoe got into a gun battle with more officers outside a strip mall. Again, the suspect got away.

The brothers reunited a short time later and wound up relocating to Utah where they worked together on a farm. Eventually, Cheyne Kehoe left the farm, returned to Washington state and turned himself into the authorities for the Ohio shooting.

He also told FBI agents where they could find his brother. In June 1997, Chevie Kehoe was arrested and charged with murder. A few months later, authorities caught up to Lee in Oklahoma.

The indictments outlined a long, violent history for both men. Kehoe was connected to two murders, two robberies, a shooting and a bombing in addition to the Mueller slayings.

Lee participated in the slayings, as well as the bombing.

Both men were charged with murder, conspiracy and racketeering.

They were tried together and jurors convicted them of all charges.

Kehoe's sentencing hearing was first. Jurors returned with a recommendation for life after defense attorneys convinced them that Kehoe had a sliver of good in his soul and that he could have led a productive life had he not been led astray by his parents.

Lee, on the other hand, was given the death penalty because jurors were more convinced he was a greater danger than Kehoe.

Among the testimony presented during Lee's sentencing hearing was the fact that he took part in a gruesome murder when he was 17 years old. He beat another teen and forced him down a manhole and into a sewer, at which time he gave his cousin a knife. His cousin fatally stabbed the teen, according to court testimony.

Lee also had a long record of violence dating back to his youth. While in jail awaiting trial for the Arkansas murder, he threatened to kill a guard because she wouldn't let him call his lawyer, prosecutors said.

In spite of the aggravating factors stacked against Lee, Veillette, like her mother and grandmother, was stunned when jurors returned with a death penalty recommendation for Lee and not Kehoe.

It remains whether any of them will attend today's lethal injection. Veillette said she had bought a plane ticket, but her physician has advised her not to go.

Either way, she has long been opposed to Lee's execution. If anyone was deserving of such a punishment, it was Kehoe, she has said.

"I don't know whether Lee was indoctrinated by [Kehoe], but certainly he found validation and acceptance for who he was," Veillette said. "He seemed to take to that ... [Kehoe gave him] some validation and importance."

Lee's attorneys have said their client is no longer a white supremacist. He wanted his racist tattoos removed soon after he was sent to prison, but the Bureau of Prisons refused because they considered it "elective surgery," attorneys said.

Veillette said she wants to believe that.

"We've heard that [Lee] has renounced all of his racist beliefs," she continued. "I hope that is true."