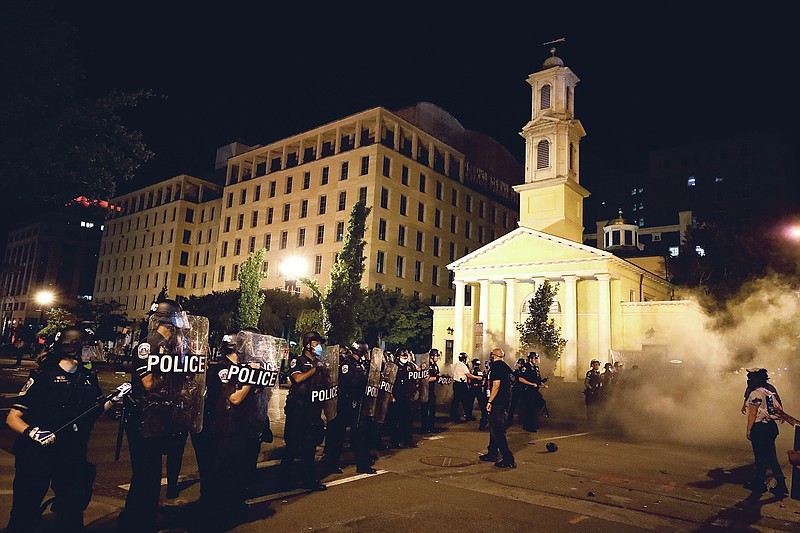 FILE - In this Saturday, May 30, 2020 file photo, police for a line near St. John's Episcopal Church as demonstrators gather to protest the death of George Floyd, near the White House in Washington. Floyd, a Black man, died after being restrained by Minneapolis police officers. St. John's, at the epicenter of protests in Washington, has a long legacy on civil rights dating to its embrace of the 1963 March on Washington. (AP Photo/Alex Brandon)

WASHINGTON -- The Rev. John C. Harper had been rector at the historic St. John's Episcopal Church for less than a year when the 1963 March on Washington began taking shape. A lay leader in the congregation urged him to steer clear of it -- but instead he embraced it.

Harper held a service the morning of the march, welcoming a diverse crowd of more than 700 people at the church across from the White House. Black Episcopal choir members sang alongside the St. John's choir, and the service ended with worshippers holding hands to sing the iconic civil rights movement song "We Shall Overcome."

"The church has too long been silent on this important issue," Harper wrote to church members that month. "Now at long last Christians like ourselves are aroused by the injustice of discrimination in any form and by any kind of segregation on the basis of a man's color."

The summer of 1963 left a lasting legacy at the yellow-walled house of worship, consecrated in 1816 and often referred to as "the Church of the Presidents" for having hosted every leader since James Madison at least once.

Core principles such as support for equal rights, community engagement and eschewing partisan politics while not shying away from the pressing issues of the moment have guided St. John's for decades and continue to do so today, after the church once again found itself at the center of an American awakening over racial injustice following George Floyd's killing.

On the night of May 31, the basement of St. John's parish house was damaged by fire during protests against police brutality and racism. The following day President Donald Trump staged a photo-op outside after police forcibly cleared the streets of demonstrators, putting the church's apolitical ethos to the test.

The Rt. Rev. Mariann Budde, Washington's Episcopal bishop, expressed outrage at Trump's use of the church immediately afterward. But true to the St. John's way, it didn't become a symbol of repudiation of the president in the ensuing weeks.

Instead St. John's has sought to maintain the spirit of the volunteer effort sprouting organically the morning after the fire, when parishioners and others showed up to comfort the community -- what church leaders called a "ministry of presence" in messages to parishioners.

"What Rev. Harper did was avoid the temptation to be pulled on one side or another, but to just be a graceful place in the middle of it all, and I think that's exactly what we were doing," said the Rev. Rob Fisher, rector at St. John's since last year.

"You could get into thinking about sides," Fisher added, "but what we were able to do in those moments was be face-to-face."

St. John's has been a home for parishioners and presidents of all political stripes since Madison, who was in office from 1809 to 1817, famously selected a pew that was then set aside for later commanders-in-chief.

"Everybody checked their partisan politics at the door," recalled the Rev. Luis Leon, who served as rector from 1994 to 2018.

"There are sharp elbows in Washington, highly opinionated people ... but not once did they say, 'That's not something you should address from the pulpit,'" Leon said.

Among the presidents for whom Leon didn't edit his sermons: Bill Clinton, an occasional visitor, and George W. Bush, a semiregular attendee like his father.

"If he was in town, he was in church," Leon said of the younger Bush. Leon also offered prayers at the inaugurations of Bush and Barack Obama.

St. John's was in the spotlight last year when then-special counsel Robert Mueller, a church regular, was photographed there shortly after submitting his report on Russian meddling in the 2016 election. Trump had visited the church the preceding week.

Beyond the famous faces, St. John's has a tradition of community engagement predating Harper and continuing after him.

Leon started a Spanish-speaking worship service when he was rector and brought St. John's into the Washington Interfaith Network, a diverse, nonpartisan local advocacy coalition.

This summer, under Fisher, the church has supported peaceful civil rights protesters by offering prayer and water. An interfaith vigil took place outside last month.

"Church is not something we just go to," Fisher said, "but sometimes we're called to be the church."

On those matters, Budde said, "you can count on St. John's to be paying attention to what the Scriptures teach, to what following Jesus looks like."

Another legacy of the late Harper's rectorship was expanding access to worship at St. John's, which had no Black members in 1960, according to Grimmett.

The church's surroundings have changed dramatically of late.

Mayor Muriel Bowser renamed a section of the street outside Black Lives Matter Plaza in June, and city workers painted that title in huge yellow lettering on the asphalt.

"I think the place will become an epicenter for demonstrations in Washington," Leon said. "And how that's going to change how St. John's is seen, or how it sees itself, I wouldn't dare to speculate." 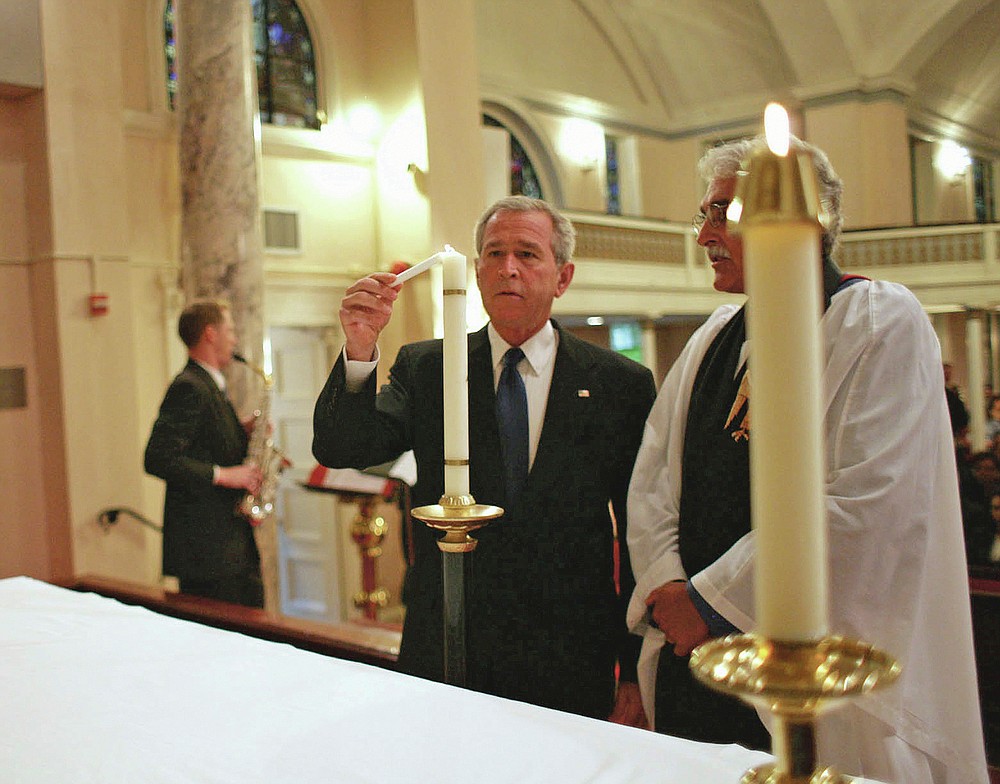 FILE - In this Tuesday, Sept. 11, 2007 photo provided by the White House, President George W. Bush lights a candle accompanied by Rev. Luis Leon, during a service of prayer and remembrance at St. John's Episcopal Church in Washington marking the sixth anniversary of the Sept. 11 terrorist attacks. “If he was in town, he was in church,” Leon said of the younger Bush. (Eric Draper/White House via AP) 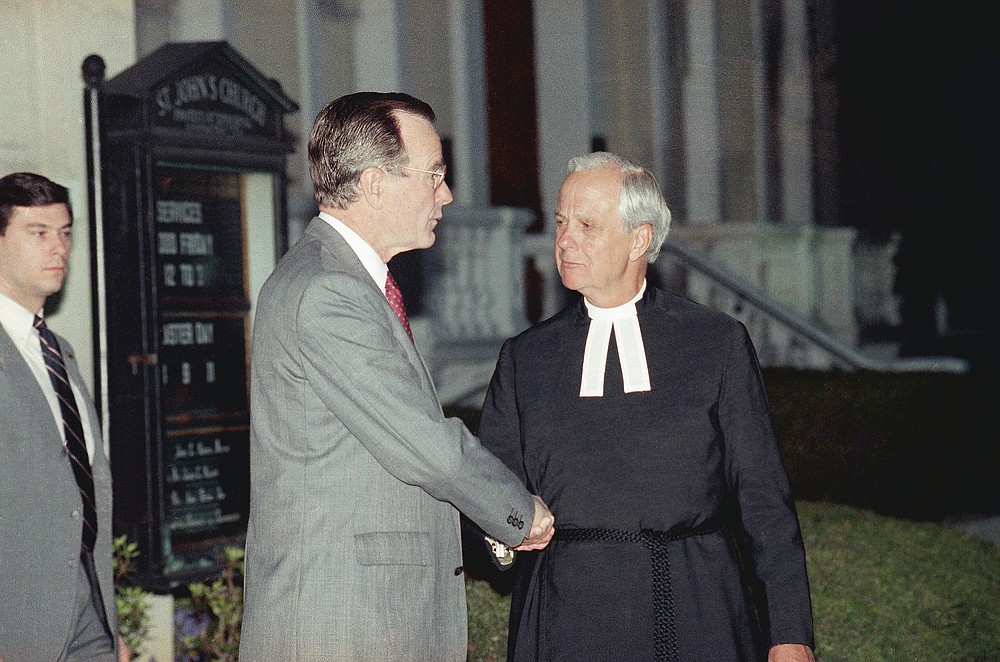 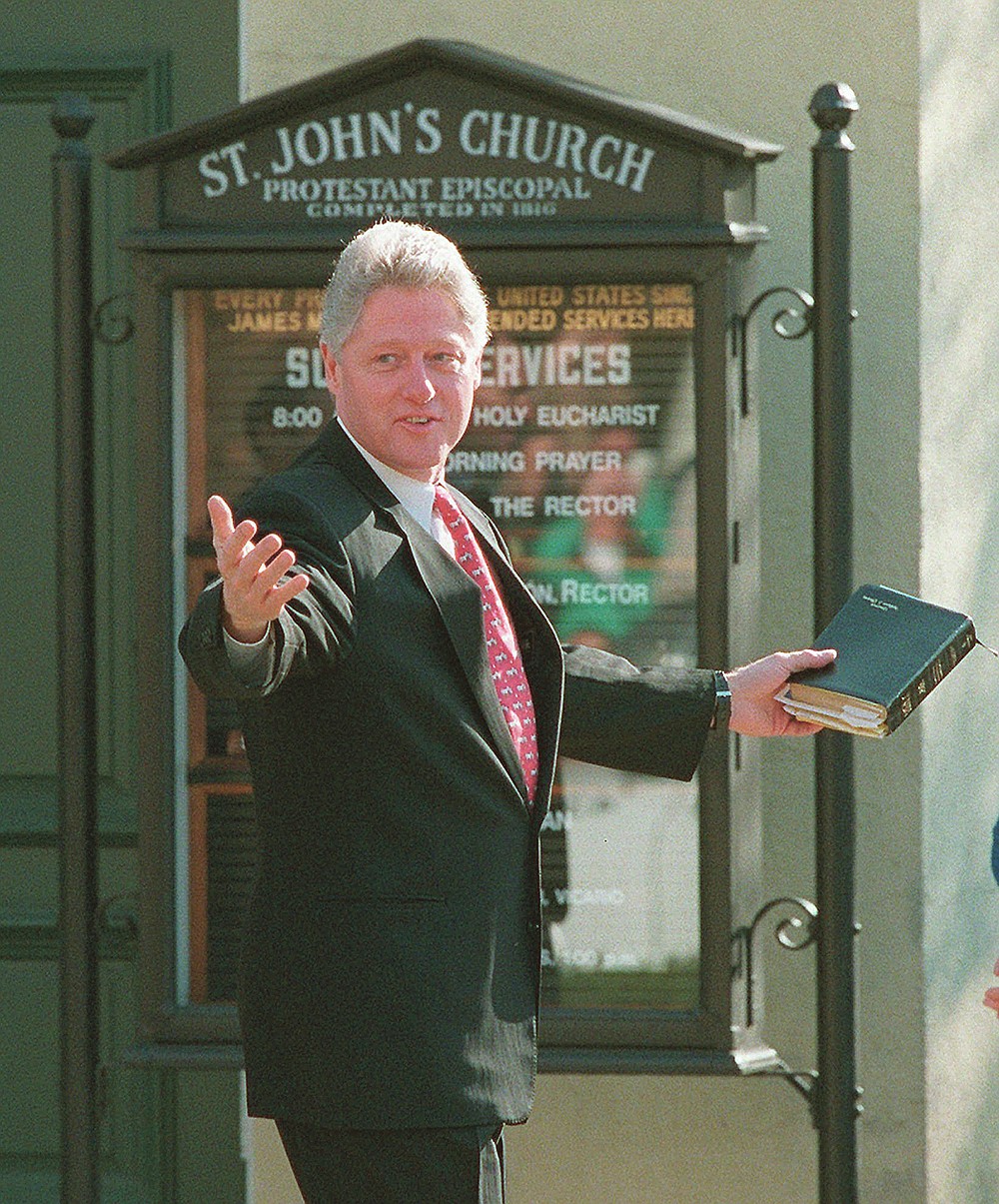 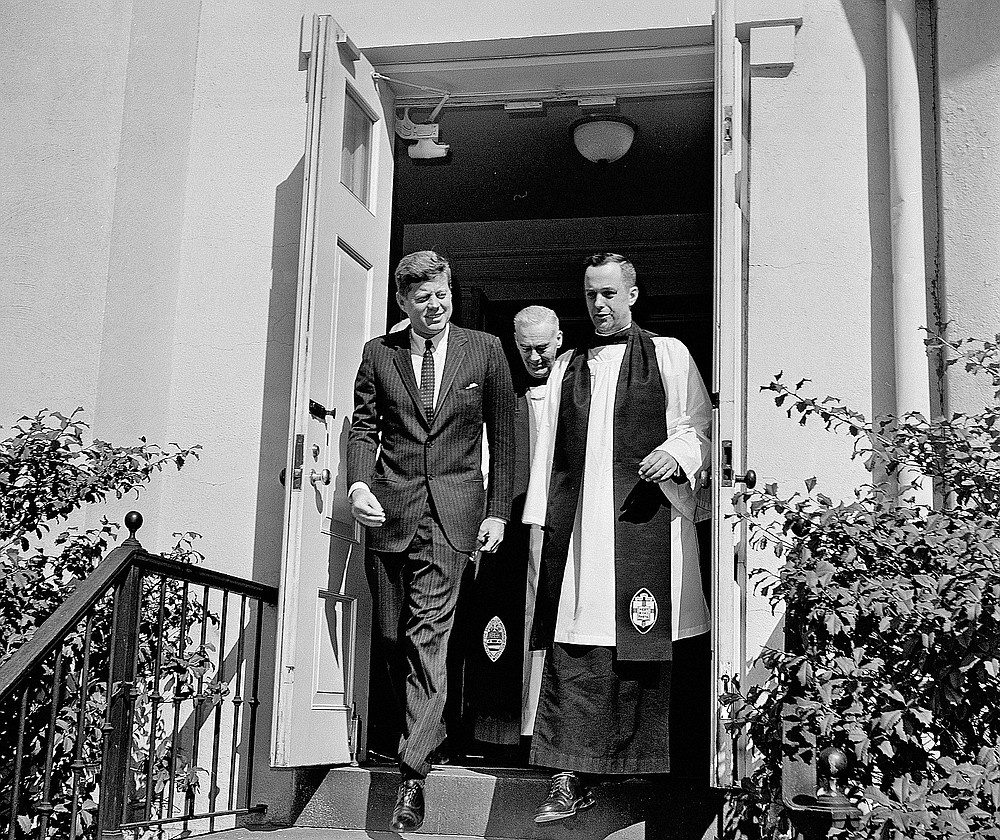 FILE - In this March 10, 1963 file photo, President John F. Kennedy leaves St. John's Episcopal Church after attending Mass at St. Stephens Roman Catholic Church in Washington. At right is Rev. John C. Harper, new rector of the church, and at rear is the Right Rev. William F. Creighton, Episcopal Bishop of Washington. During his visit to St. John's, Kennedy signed a prayer book which bears the signatures of all presidents since Herbert Hoover. (AP Photo) 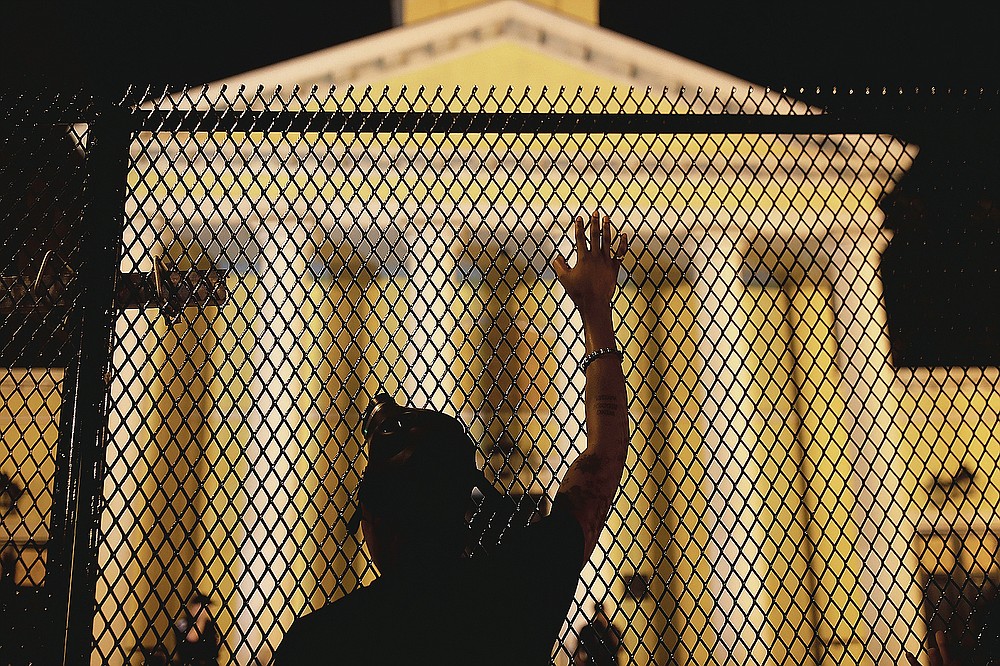 FILE - In this early Wednesday, June 24, 2020 file photo, a protester calls out to police standing guard behind security fencing at St. John's Episcopal Church, near the White House, amid continuing anti-racism demonstrations following the death of George Floyd, a Black man who died while being restrained by police in Minneapolis. St. John's, at the epicenter of protests in Washington, has a long legacy on civil rights dating to its embrace of the 1963 March on Washington. (AP Photo/Maya Alleruzzo) 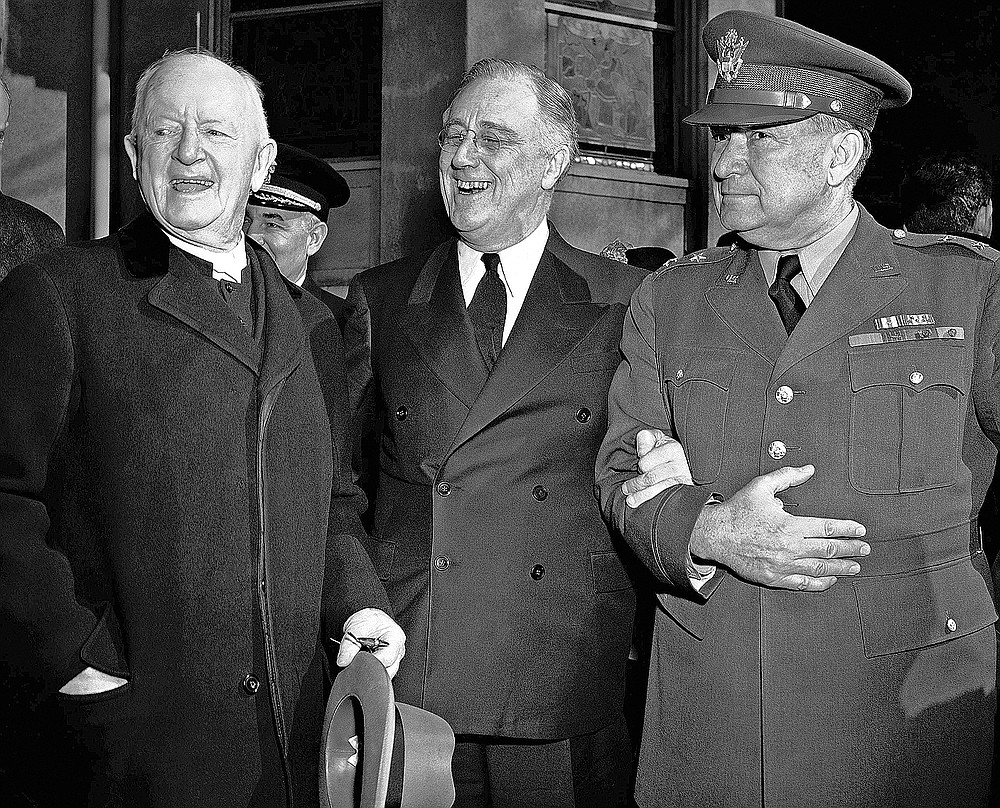 FILE - In this March 4, 1942 file photo, President Franklin Roosevelt leaves after prayer services at St. John's Episcopal Church in Washington, following his custom of attending church on each anniversary of his first inauguration on March 4, 1933. As he left the church he stopped to talk with the Rev. Endicott Peabody, left, headmaster emeritus of Groton school. At right is Major General Edwin M. Watson, presidential secretary and military aide. (AP Photo) 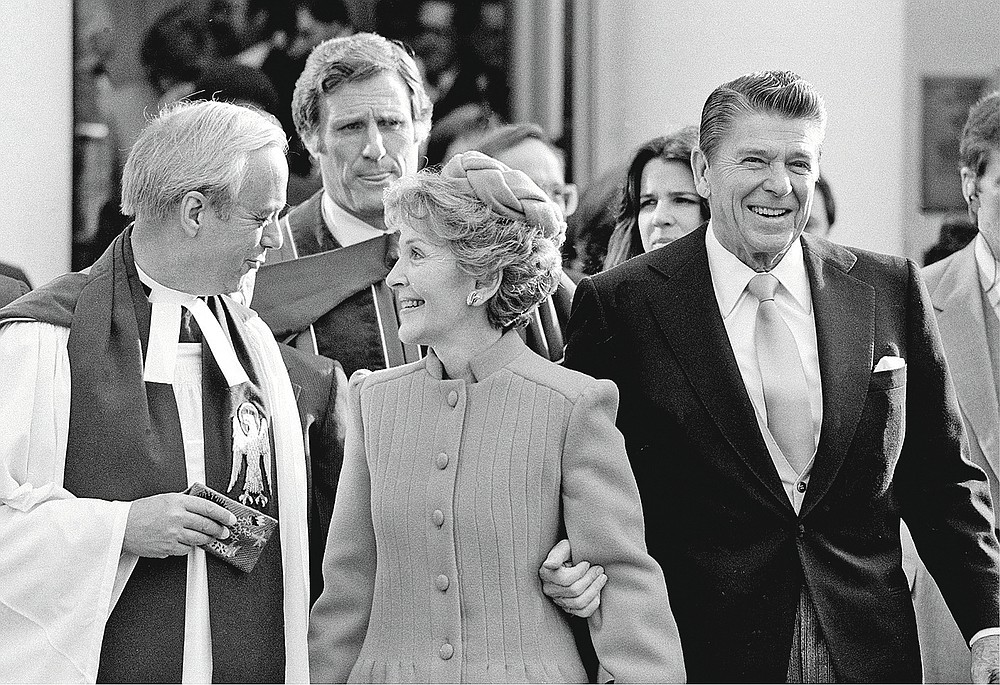 FILE - In this January 1981 file photo, President-elect Ronald Reagan and his wife, first lady Nancy, leave St. John's Church in Washington, after attending services. The Greek Revival house of worship was consecrated in 1816 and often dubbed “the Church of the Presidents” for having hosted every leader since James Madison for at least one service. (AP Photo) 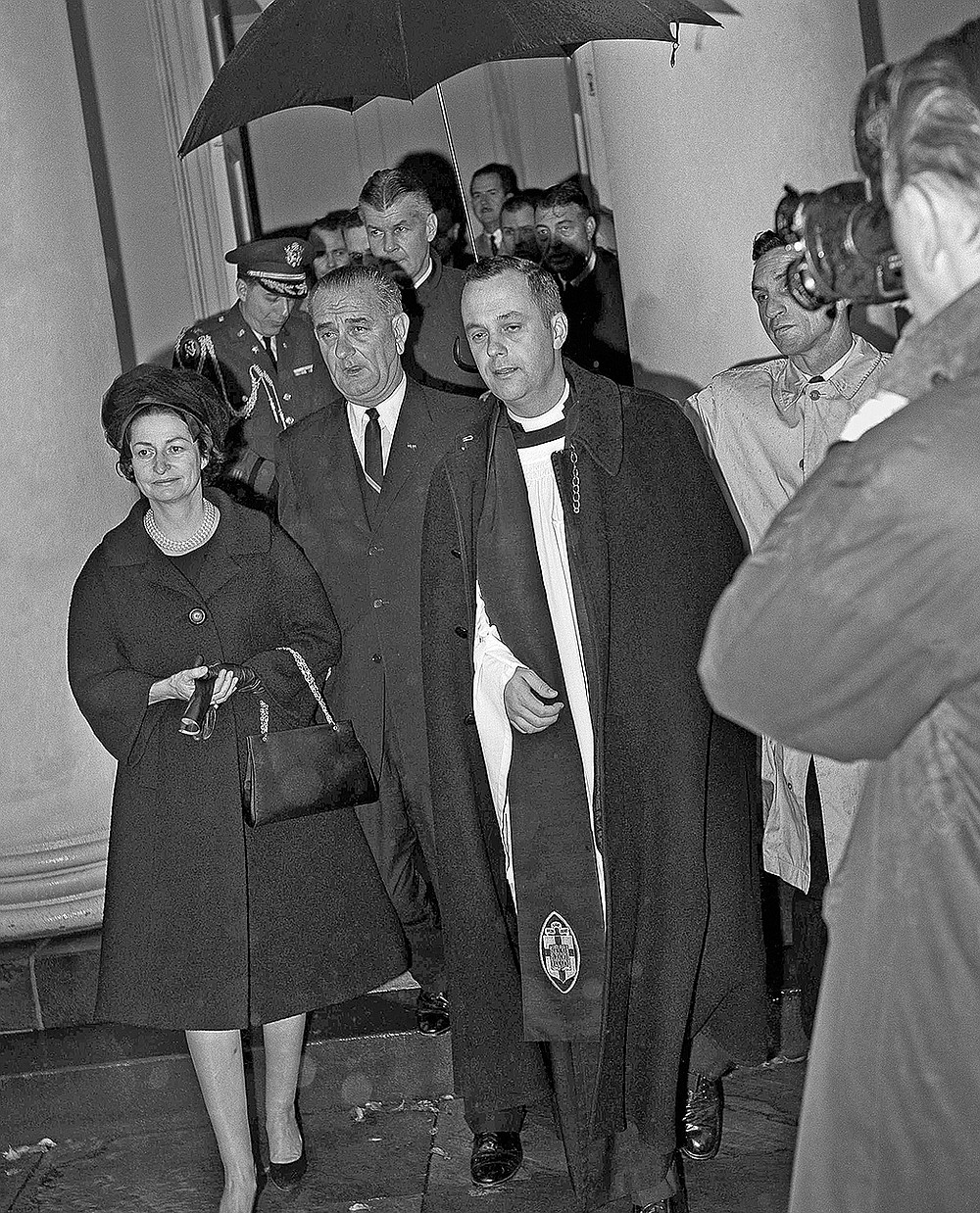 FILE - In this Nov. 23, 1963 file photo, President Lyndon Johnson and his wife, Lady Bird, leave St. John's Episcopal Church in Washington after attending special services. With them is the rector, the Rev. John C. Harper. Johnson was sworn in as president shortly after the assasisnation of John F. Kennedy in Dallas on Nov. 22. (AP Photo) 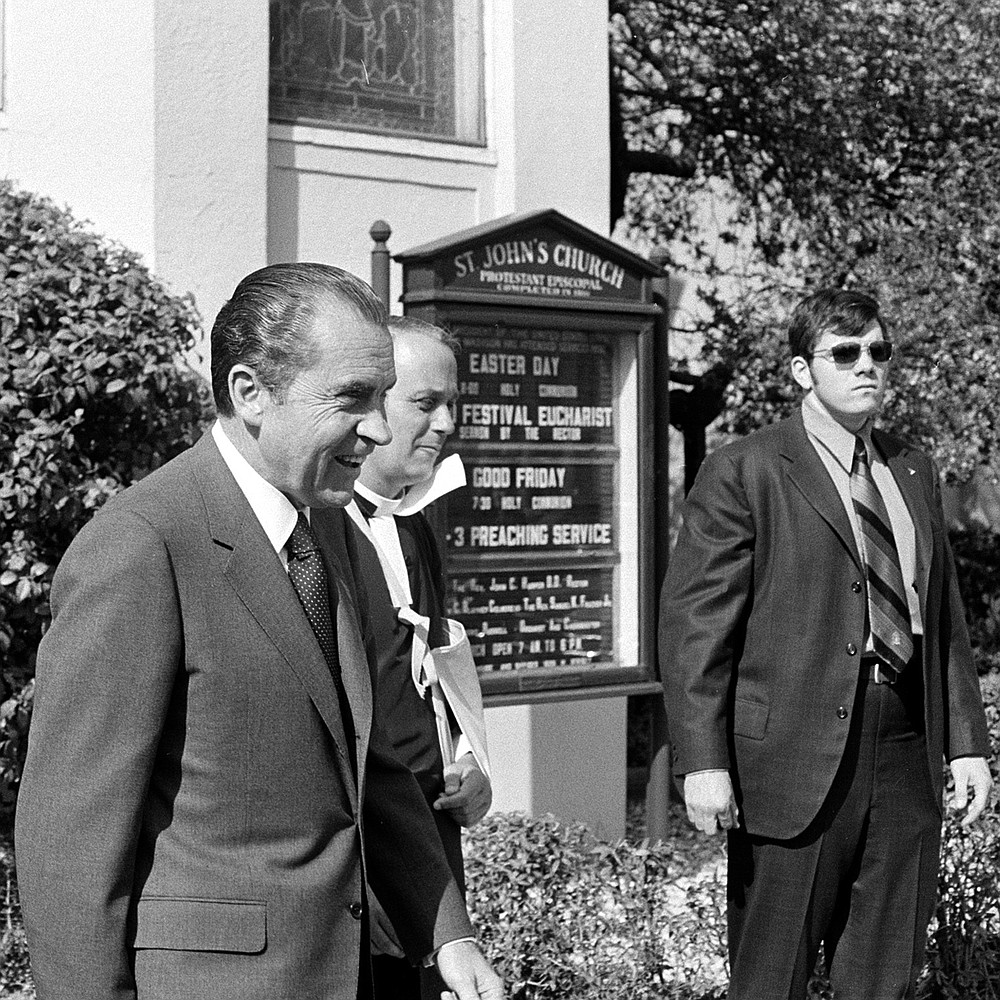 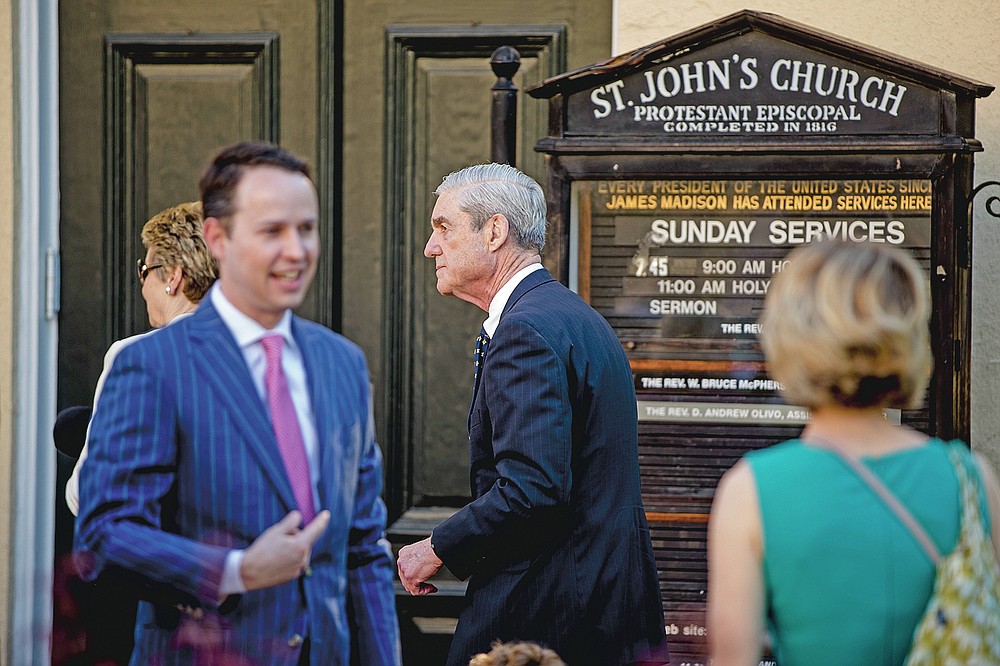 FILE - In this Sunday, April 21, 2019 file photo, special counsel Robert Mueller, center, and his wife Ann Cabell Standish, left, arrive for Easter services at St. John's Episcopal Church in Washington. St. John's was in the spotlight in 2019 when Mueller, a church regular, was photographed there shortly after submitting his final report on Russian involvement in the 2016 election. Trump had visited the church the preceding week. (AP Photo/Andrew Harnik) 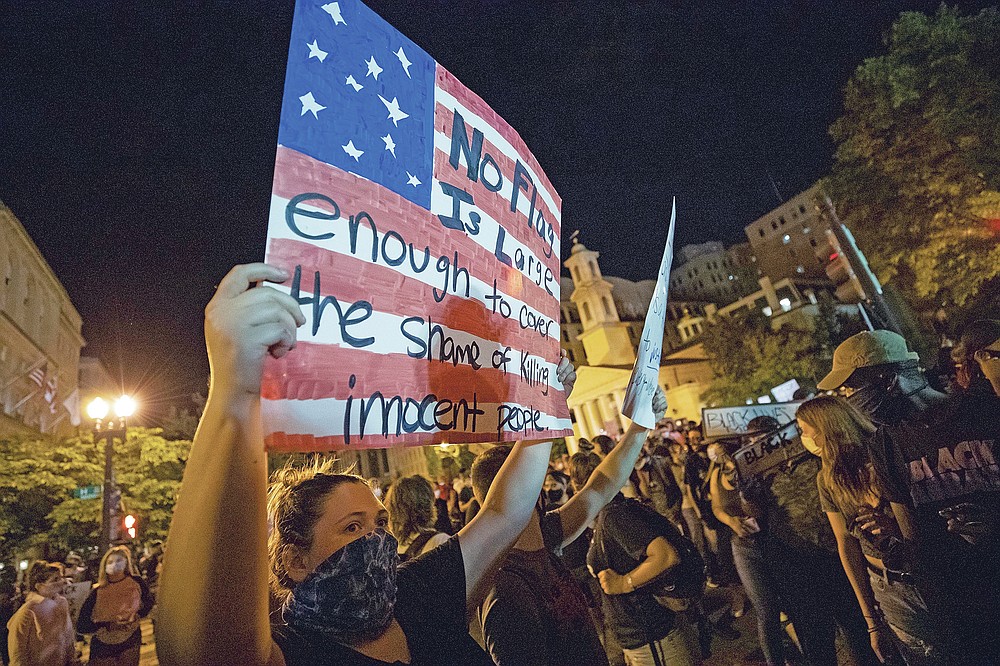 FILE - In this Saturday, May 30, 2020 file photo, demonstrators gather to protest the death of George Floyd, with St. John's Episcopal Church in the background, near the White House in Washington. Floyd died after being restrained by Minneapolis police officers. St. John's, at the epicenter of protests in Washington, has a long legacy on civil rights dating to its embrace of the 1963 March on Washington. (AP Photo/Alex Brandon) 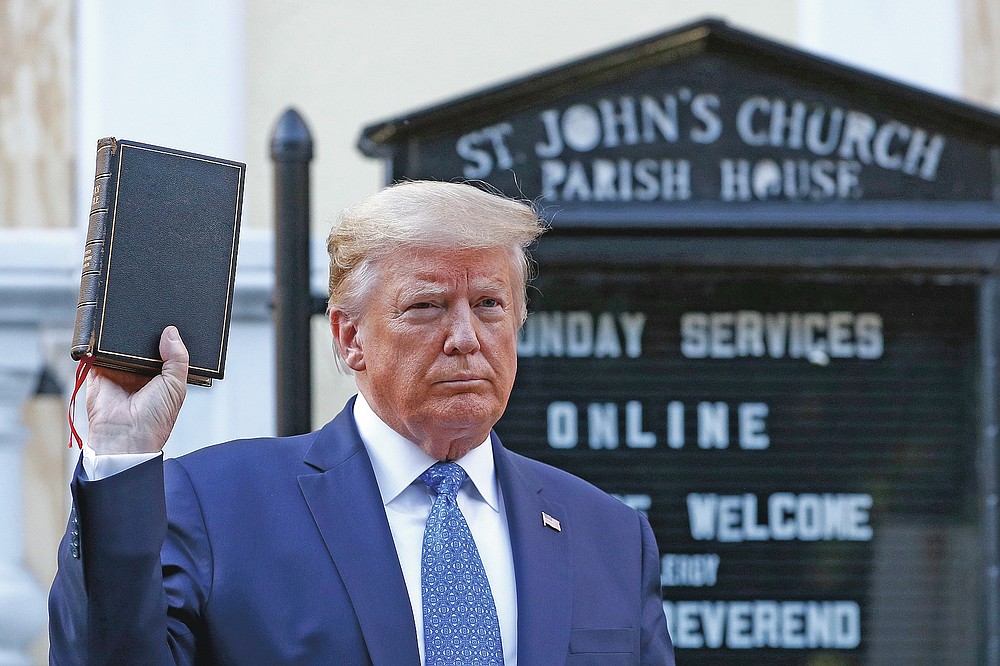 FILE - In this Monday, June 1, 2020 file photo, President Donald Trump holds a Bible as he visits outside St. John's Church across Lafayette Park from the White House in Washington. Part of the church was set on fire during protests the previous night. (AP Photo/Patrick Semansky)
ADVERTISEMENT