Black history lessons await for those who travel the Arkansas Civil Rights History Tour by PHOTOS BY MARCIA SCHNEDLER STORY BY JACK SCHNEDLER SPECIAL TO THE DEMOCRAT-GAZETTE | July 14, 2020 at 2:01 a.m. 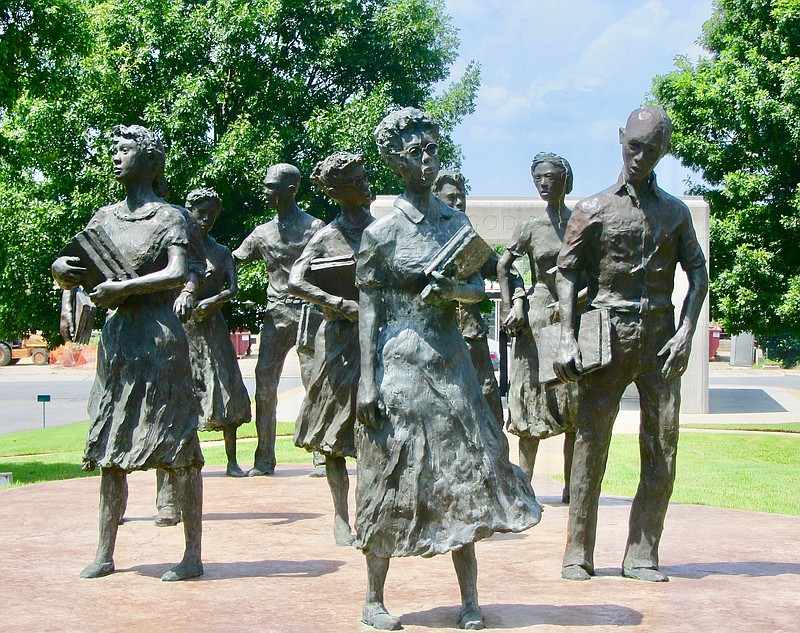 The Little Rock Nine are depicted in a sculpture by John and Cathy Deering outside the state Capitol.

The National Park Service's visitor center at Central High School, scene of the most famous episode in the tangled history of Arkansas race relations, is open again.

Little Rock Central High School National Historic Site, closed for three months due to covid-19, is a riveting stop among the three dozen locations on the city's Arkansas Civil Rights History Tour. The ordeal of the nine Black students who desegregated Central in 1957 is painstakingly told via text, photographs and film.

As Americans debate wrenching racial concerns with fresh vigor and rancor in 2020, Black history is the primary focus of the trail. Created in 2011 by UALR's Anderson Institute on Race and Ethnicity, the route also touches a bit on the heritage of other minorities. Following is a sampler of some especially notable stops.

Detailed at arkansascivilrightsheritage.org, the trail goes back as far as the city's formative decades of the 1820s to 1850s. That antebellum era is given a grim gloss at Historic Arkansas Museum, 200 E. Third St., by a memorial to slaves who were part of the early population here.

The outdoor plaque, titled "Giving Voice," lists 139 slaves who belonged to landowners in three city blocks now occupied by the museum. Suggesting that slaves were considered mere property rather than fellow human beings is the fact that last names are given for only six of those listed. Another 26 are "Unknown," while all the rest have first names only.

"This memorial recognizes the lives of people whose history and existence here have been obscured by the immoral system of slavery and its lasting consequences," reads the inscription. "Although we may never know more about these souls, we recognize and celebrate their lives."

The Little Rock Nine, along with many other figures from the 1957-1959 desegregation crisis, are pictured in a multitude of photographs on two arches in the Commemorative Garden at Daisy L. Gatson Bates Drive and Park Street.

East across Park Street, Little Rock Central High School National Historic Site is limiting admissions to the free visitor center to 10 persons at any time. On some days, those waiting to enter are treated to a lively account of the crisis by volunteer Patty Cummings.

Inside the visitor center, film and photos show the white mobs that menaced the Black students and seriously injured a Black newspaper reporter from Memphis. Television footage depicts the arrival of the 101st Airborne Division, sent by President Dwight Eisenhower to escort the Little Rock Nine into Central High, where they were harassed all school year by some white students.

The site's brochure notes that "the Little Rock crisis occurred in the infancy of TV, and was one of the first news stories filmed as events unfolded. The worldwide coverage, generating outrage at the violent denial of civil rights, became a model for the civil-rights movement's use of the media over the next decade."

Daisy Bates, renowned mentor of the Black students, is honored at two locations on the heritage trail. Her modest home at 1207 W. 28th St., where several fiery crosses were burned on the lawn during the crisis, is identified with a front-yard plaque.

Her tombstone in Haven of Rest Cemetery, 7102 W. 12th St., carries her photograph and full name: Daisy Lee Gatson-Bates. Above the photo is an inspirational quotation: "Your future is purchased in the present. Only the educated are free."

The brave campaigning for civil rights in the South that led to federal desegregation laws in the 1960s is marked by a plaque at 201 W. Markham St., now a parking garage. It was a Mid-West Trailways bus depot in 1961 when five Freedom Riders from St. Louis arrived to protest Jim Crow laws. Their arrest was watched by 300 onlookers before they spent the night in jail.

A hopeful sign of change in racial attitudes by white Arkansans can be seen— perhaps with the aid of rose-colored glasses — at the Arkansas Korean War Veterans Memorial. Dedicated 13 years ago near MacArthur Museum of Arkansas Military History, the sculpture depicts two American troops — and one of them is Black.

CORRECTION: The Little Rock driving route described is the Arkansas Civil Rights History Tour. It was misidentified in a previous version of this story.