'The Old Guard': Some immortals worth watching 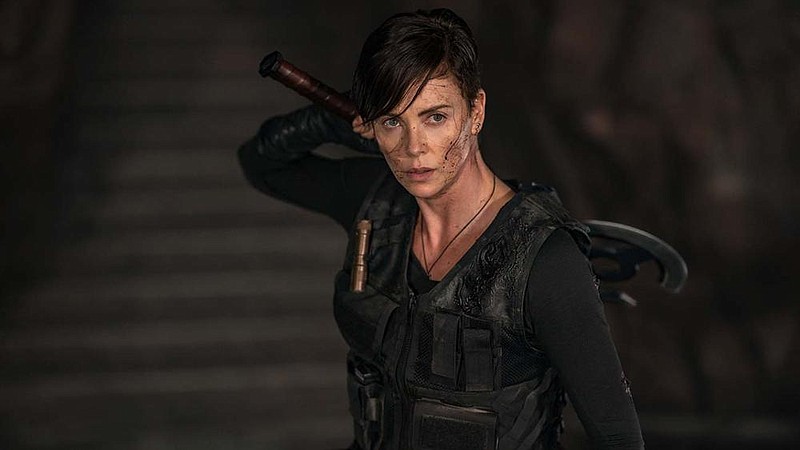 Charlize Theron is Andy, also known as Andromache of Scythia, a centuries old warriors with regenerative healing abilities who uses her vast experience — and her ax — to help people in the Netflix movie “The Old Guard.”

There's just something about a story following characters across the ages that reels me in. The theme of immortality has always been one of my favorite aspects of storytelling.

It's one of the things that makes Osamu Tezuka's "Phoenix" and "Highlander" such great stories. (Though, if you're going to read "Phoenix," let me warn you. Prepare to be seriously bummed. That series gets depressing.)

Last week, Netflix added a new film to its library called "The Old Guard." I saw the trailer for this movie a little before it came out, and I made sure to add a listing in my Google Calendar app to watch it when it dropped. Immortal warriors trying to avoid capture from a pharmaceutical CEO that wants to cage and study them for the rest of their unnatural lives? Sign me up.

In today's tech-driven world with location tagging and facial recognition software, staying out of sight as an immortal would pose a pretty big challenge as the planet seems to get smaller. There are some towns in Arkansas you'd be safe in (Jasper comes to mind), but generally, it'd be hard to stay out of sight.

"The Old Guard" is based on a relatively new series of comics from Greg Rucka and Leandro Fernández. And we're not talking mainstream DC or Marvel. "The Old Guard" is published by Image Comics, which also handles titles like "The Walking Dead."

My wife and I sat down to watch "The Old Guard" after work one week ago. We made a night of it and ordered pizza. (Who's old fashioned? Certainly not us.)

It did not take me but five minutes to fall in love with the main characters as Charlize Theron tried to guess the origin of some baklava she'd been given as a gift while the other immortals placed bets on her accuracy.

Right away the movie establishes this isn't going to be a mindless action flick. The characters have some personality other than the stereotypical heavy drinking to indicate a broken past that seems to pass all necessary character development in most action flicks, like "Extraction." (What was Chris Hemsworth's character like? He ... drank and shot a gun. shrug)

I feel like if you were playing a game of Guess Who? with action heroes and listed that sole trait, most of them would be flipped down immediately.

But these immortal characters were the best part of the movie. And somehow, the movie found time to develop every single one of them.

The diversity of the cast really shined through, whether it was the characters of Joe and Nicky (played by Marwan Kenzari and Luca Marinelli) highlighting a beautiful love story that spanned centuries or the freshness of Nile (played by KiKi Layne) coming to grips with a new immortal status and realizing she's going to outlive her entire family and everyone she has ever known.

Theron shines in the lead role as a badass hero so old she can't even remember her age anymore while wielding an axe to chop up armed thugs trying to abduct her crew. She portrays the perfect exhausted immortal who has walked the world so long, fought so many battles and ultimately wonders what good it all did.

It's through Theron I got to see the costs of immortality. After enough centuries have gone by, what really gets you is the loneliness. Trying to touch the lives of mortals is to watch it flicker out while your fire burns and lingers on. In the end, if an immortal isn't put in a cage, it seems the worst fate they suffer is loneliness. After all, to whom can they relate except their other few immortals?

The diversity of this story was exactly what it should have been, 100% free of preachiness. Yeah, Joe and Nicky are gay lovers, but their relationship isn't trumped up as some kind of moral value for everyone else to look upon and behold. The actors win you over by their actual portrayal of love in an immortal relationship. Some marriages don't even last a month, but here these guys are still excited just to see each other smile, even after centuries.

In a similar manner, the movie doesn't grab a megaphone and shout, "Look at Charlize Theron kick ass as a woman! Look at Nile beating up all these villains as a woman! Strong women!" Instead, the characters are established through several well-choreographed and exciting action sequences. They're warriors who don't go down without a fight. It feels natural in the story.

Director Gina Prince-Bythewood did a great job of helming this comic book-adaptation and piecing together a story I craved more of when the credits began to roll. I was quick to tweet Netflix and let them know I wanted a sequel ASAP. And as an established film columnist in Arkansas, I'm sure my opinion will carry significant weight with the company.

What directors like Prince-Bythewood and Patty Jenkins ("Wonder Woman") are accomplishing in the genre of blockbuster action films is tremendous. And I think it's evidence Hollywood needs to put more women behind the camera and greenlight more projects with women at the helm.

Of course, as much as I loved "The Old Guard," I can't say it's a flawless movie. Its biggest weakness is the villain. Harry Melling plays a rich and ruthless pharmaceutical CEO named Steven Merrick. And ...

He's evil. He wants to unlock the protagonists' immortality, find a way to sell it, make more money, blah blah blah. His character can pretty much just be labeled "evil rich villain." Merrick's story was nonexistent, his motivation was bland and ultimately, I've seen this character in a hundred other movies.

Shouldn't the villain have been an evil immortal? And maybe that's a storyline in the comics (or "The Old Guard 2"). But these are warriors who have lived for centuries. Thank goodness they're all good guys with a conscience, instead of say ... someone who looked upon mankind over a millennium and decided we weren't redeemable as a species (a few minutes on Twitter might confirm that).

After all this time on the planet, all these battles fought, the most interesting villain the immortals face was a CEO? Really?

I don't think "Highlander" is superior to "The Old Guard," but it managed to produce a more interesting villain in The Kurgan. Immortals are epic. Their villains should be as well.

But unlike the garbage sequels to "Highlander," "The Old Guard" didn't try to explain where immortality comes from. I like some things left to mystery. And it's difficult to come up with a satisfying explanation for the origins of a character's limitless youth.

On a smaller note, one other weakness "The Old Guard" suffered through was soundtrack placement. The music selection got a little wonky and distracting in some scenes.

Flaws aside, I want "The Old Guard 2," and I want it now. Hopefully, the comics can satisfy that itch until Charlize Theron and her crew are contracted for a sequel.

I feel like the number of original fantastic science fiction movies that aren't sequels or reboots continues to drop each year. Sure, last year gave us great movies like "The Wandering Earth" and "Alita: Battle Angel," but we also got stinkers like "Replicas" and "Ad Astra."

So let's make a checklist for 2021 and beyond. "The Old Guard 2," more women behind the camera and more original science fiction stories. That shouldn't be too hard, right? Or should I just wish for a pony again.