Kids who did: Jane Goodall, 86, still fighting for a better world 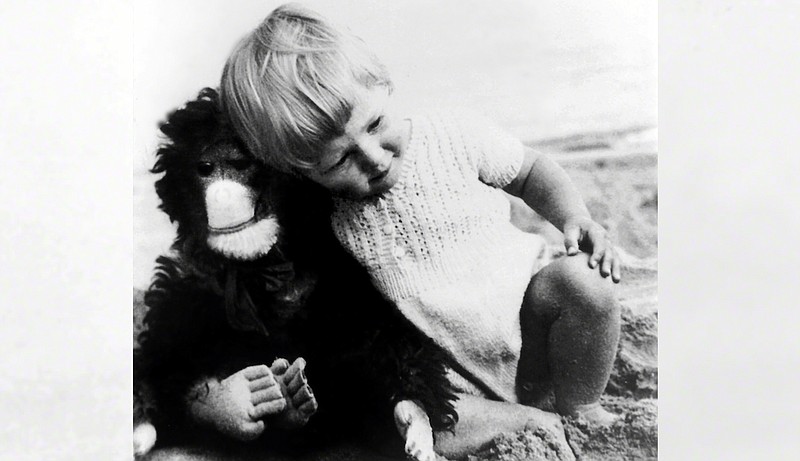 Jane Goodall was a 10-year-old with a dream. A dream of diving head-first into fictional tales such as "Tarzan of the Apes" to live with wild animals in Africa. "Everybody laughed," Goodall, now 86, says.

Everyone, except Goodall's mother, Vanne Morris-Goodall.

"Mom said, 'If you really want something like this, you're going to have to work really hard. Take advantage of every opportunity. But if you don't give up, you'll probably find a way.'"

Just 16 years later, that starry-eyed British girl stepped onto the shores of the Gombe Stream Game Reserve in Tanganyika (now Tanzania). It was July 14, 1960. She had been sent by anthropologist Louis Leakey with a simple-sounding mission that was anything but: Watch chimpanzees in the wild.

"The problem was the chimps ran away as soon as they saw me," Goodall says. "Nobody had studied them before."

Months of patience and persistence paid off when the chimpanzees slowly began to accept Goodall's presence. One male adult in particular, whom Goodall called David Greybeard because of his silver facial whiskers, was the most tolerant.

It was by observing him that Goodall made her groundbreaking discovery that chimpanzees make and use tools. This is an ability scientists at the time thought only people could do. She watched as he and a primate pal, Goliath, stripped leaves from twigs before pushing them into a dirt mound to probe for termites — a chimp snack — inside.

Goodall became an international sensation. A "National Geographic" article and documentary introduced Goodall and the Gombe chimpanzees to the world. Her many findings were fascinating (chimps eat meat and wage war), and the Gombe study is still the longest continuous research on wild chimpanzees.

At the 60th anniversary of her arrival in Gombe, Goodall isn't stopping to reflect. She's charging ahead on a mission to save the world.

Until recently, Goodall traveled an average of 300 days a year, spreading a message of environmental activism and hope over decades. Her efforts led her to be named a United Nations Messenger of Peace in 2002.

Her nonprofit, the Jane Goodall Institute, has offices around the world tackling concerns including deforestation and providing sanctuary for rehabilitated chimpanzees.

She also launched the Roots & Shoots youth program in 1991 to encourage kids to start environmentally focused efforts in their communities. Projects have sprouted in 65 countries, ranging from a wildlife-appreciation carnival in Taipei, Taiwan, to an insect oasis in Munich, Germany.

She's doing her part, too, while isolating at home in Bournemouth, England. ("I haven't been busier in all my life.") Her days are now packed with interviews, Zoom video meetings and book readings.

Goodall is tired but determined, wondering if the pandemic will help people see our planet differently.

"Hopefully, enough millions of people from the big cities will for the first time have the joy of breathing clean air and seeing the stars in the night sky," she says, "and they won't want to go back to the old polluted ways."

It's also a time to embrace the natural world whenever possible. 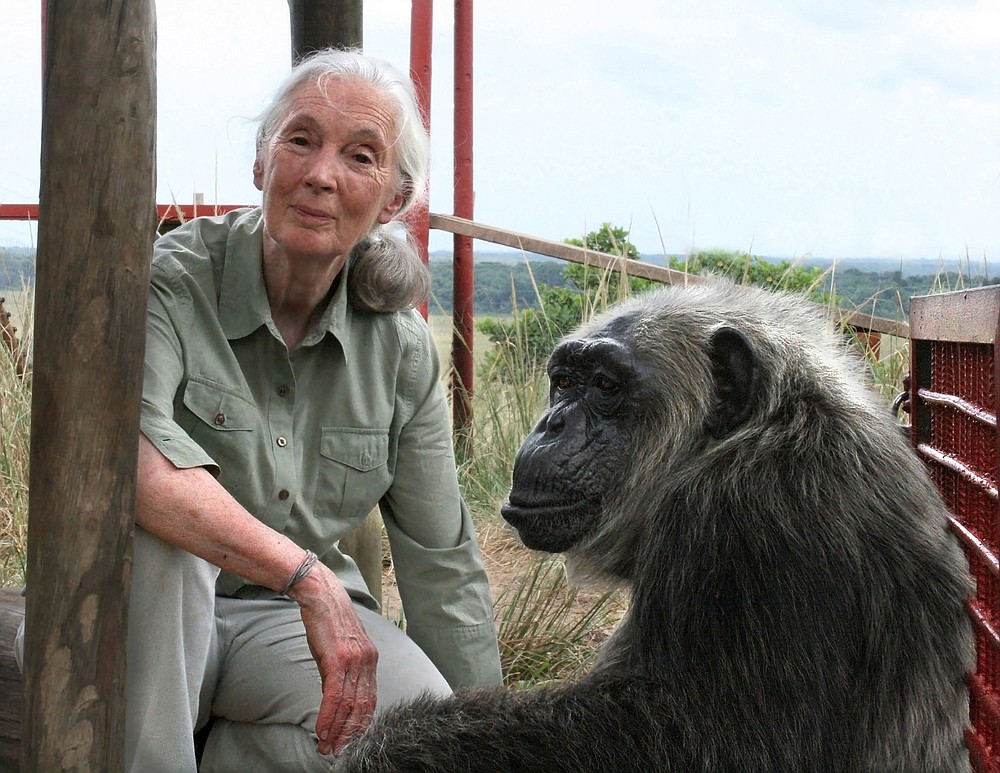 Jane Goodall with LaVielle at the Tchimpounga Chimpanzee Rehabilitation Center in Congo Republic. Goodall, a world-famous champion of chimpanzees, began her career studying their behavior 60 years ago this month at Gombe Stream Game Reserve in what is now Tanzania. (JGI/Fernando Turmo)

"See what you can see," Goodall says. "When I was young, there was no TV. So I watched and I learned how these little jumping spiders carried their babies on their backs, and it was absolutely fascinating to see."

◼️ Find your local Roots & Shoots chapter or start your own at Rootsandshoots.org.

◼️ The "Becoming Jane" exhibit at the National Geographic Museum is temporarily closed, but you can still take a virtual tour: arkansasonline.com/720jane. 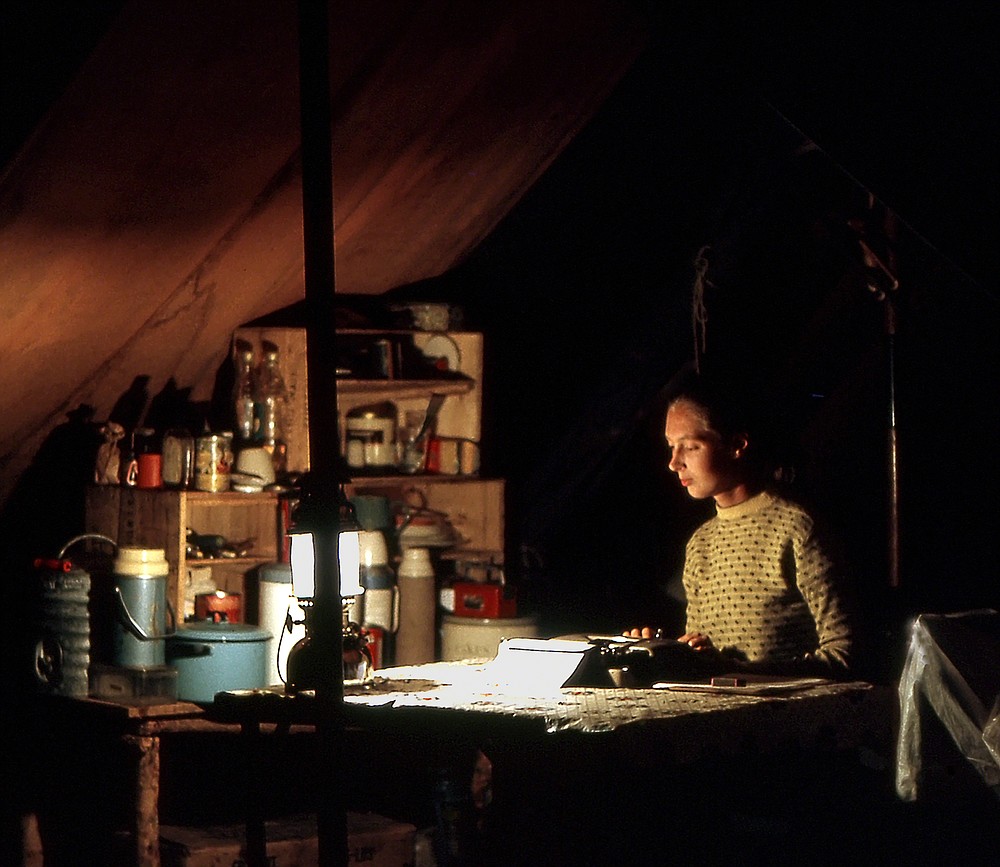 Jane Goodall writes up her field notes in her early years at Gombe Stream Game Reserve. When she began her research in 1960, no one had studied chimpanzees in the wild. (Hugo van Lawick)
ADVERTISEMENT