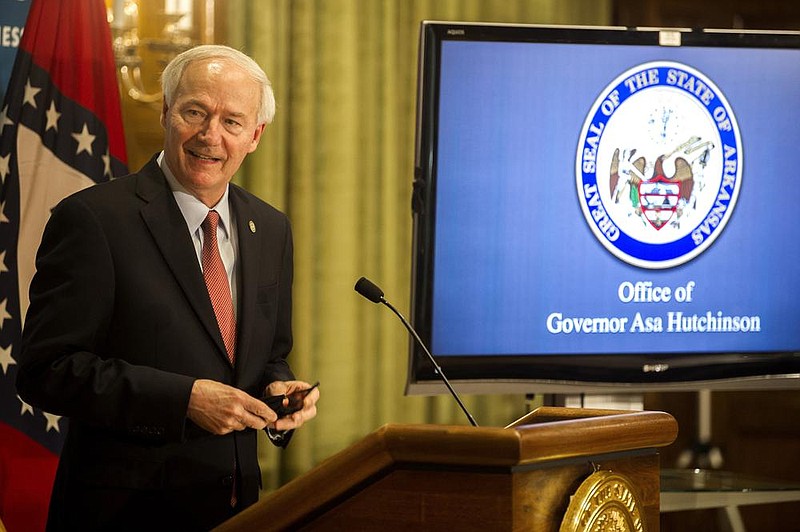 Gov. Asa Hutchinson said Friday that he did not take issue with law enforcement officials’ decisions on mask enforcement, as they are “subject to local priorities.” More photos at arkansasonline.com/718gov/. (Arkansas Democrat-Gazette/Stephen Swofford)

A statewide mask mandate ordered by Gov. Asa Hutchinson the day before met its first test of resistance Friday, with some law enforcement agencies saying that they would not devote resources toward compliance and others threatening to ignore the order entirely.

The order, which will go into effect Monday, requires most people to wear masks in public when they cannot effectively distance themselves from others.

Repeat violators can face fines up to $500, though first-time infractions are to be met with a warning, according to the text of Hutchinson's executive order. The order prohibits officers from detaining or arresting anyone for failing to wear a mask.

The statewide mandate follows decisions by a few cities to enforce their own mask ordinances. Several metropolitan law enforcement agencies in the state, including the Little Rock, North Little Rock and Fort Smith police departments, along with the Pulaski County sheriff's office, said Friday that they were prepared to enforce the mandate if necessary.

"We will be guided by the mandate once it is in effect," a Little Rock police spokesman, Lt. Casey Clark, said in a statement. "Officers will follow the mandate and use best judgment for the situation they are confronted with."

Still, in other jurisdictions, law enforcement officials expressed concerns ranging from a lack of manpower to the belief that the governor had overstepped his authority in ordering the use of masks. Agency heads took to social media to announce their own policies, with some adding in the flourish of personal grievances.

"I Chief Lang Holland feel this order is a very large overreach of the powers given to the State government by the citizens of the state of Arkansas," the Marshall police chief wrote in a memo posted to the department's Facebook page. "Therefore the Marshall Police Department will take NO enforcement action of any kind this includes arrest or citation by anyone who is not wearing a mask while out in public."

Speaking later to the Arkansas Democrat-Gazette, Holland said his officers would not go so far as to warn people to put on a mask, saying that he believed people have the right to make their own choices. Holland said he does not wear a mask in public because he believes them to be ineffective, and he will not require other officers to wear them on the job.

Other agencies encouraged residents to voluntarily follow public-health guidelines by wearing masks, which most public-health agencies agree can help slow the spread of the virus by capturing tiny respiratory droplets emitted in breath.

[Video not showing up above? Click here to watch » https://www.youtube.com/watch?v=JoTaVdC0yKU]

In a news release issued Friday, a spokesman for the Texarkana Police Department said the agency would focus on "fighting crime and providing police services" rather than enforcing the mask mandate.

"The Texarkana Police Department has, and always will, recognize the constitutional right of businesses to refuse entry and service to any persons for any reason, including the failure to wear a face covering in their business," the release said. "In the event a business calls for assistance in removing a subject who has been asked to leave, for whatever reason deemed by the business, the Texarkana Police Department will respond to assist, as we always have."

After posting a nearly identical message on his Facebook page -- which he said was copied off the Texarkana police release -- Lonoke County Sheriff John Staley told the Arkansas Democrat-Gazette that he was merely trying to assuage the fears of residents who he said had been calling his office concerned that the department would be out in force writing tickets to people for not wearing masks.

Staley said his agency, which deploys three or four deputies per shift to cover an area of more than 800 square miles, does not have the resources to focus on handing out citations, despite his support for the governor's order.

More than a half dozen of the state's 75 sheriff's offices have publicly announced that they will enforce the governor's mask order only partially or not at all.

"If enforcement action is necessary, and if we have the available manpower to respond, it will be the practice of our agency to issue verbal warnings from a safe distance, so as not to detain any individual," explained one release by the Cleburne County sheriff's office, which also urged residents not to use 911 to report people for not wearing masks.

When asked Friday about the response of law enforcement agencies to his executive order of the day before, Hutchinson said he did not take issue with police chiefs and sheriffs making enforcement decisions based on local needs.

"All of these decisions in terms of enforcement are subject to local priorities," Hutchinson said.

Some of the policies adopted by law enforcement officials on Friday left it unclear to what extent they would enforce the governor's mandate, which includes various exceptions, such as those for children, people with certain medical conditions and people attending worship services.

In a Facebook post, Randolph County Sheriff Kevin Bell said he and his deputies would not arrest anyone for failing to cover up -- arrests are not allowed under the governor's order -- though he did not say whether his office would issue warnings or citations to repeat violators.

"I feel that the government has no place telling an individual what to wear or for that matter when and how a person can worship God," Bell wrote.

Asked for clarification on the policy, a woman who answered the phone at the Randolph County sheriff's office said, "I think [Bell] just stands on what he said" in the Facebook post. Bell did not return a message seeking comment.

During a phone call hosted by the Arkansas Sheriffs' Association on Friday afternoon, Hutchinson "cleared some things up" with sheriffs, according to Scott Bradley, the executive director of the association. He said the main concern of the association's membership had to do with police resources.

"I'm not going to say each sheriff is happy about the order, but each sheriff is his own individual," Bradley said, adding that he believed a majority of the state's sheriffs supported the order and planned to enforce it.

Mark Hayes, executive director of the Arkansas Municipal League, said Friday that his office was still reviewing the governor's order and urged local authorities to proceed with caution.

"I'm hoping that nobody does anything until we can advise folks what the appropriate course of action is," Hayes said.

Agencies that did promise to enforce the order said Friday that ticket citations would not be the first step in a police response.

"Enforcement of this order would be handled by a criminal citation only if necessary," North Little Rock police spokesman Joseph Green said in an email. "Our goal is to maintain and assist citizens with their own, and others', personal safety practices and not place any unnecessary or undue hardship on them whenever education can be used to achieve the desired outcome."

Lt. Robert Garrett, a spokesman for the Pulaski County sheriff's office, likened a hypothetical enforcement scenario to a typical police call for a noise disturbance: Deputies may be dispatched to the site of a complaint and warn people there about the violation. If officers are called back again for the same problem, they may choose to issue a citation.

"It's not going to be a primary offense we're out seeking," he said.

Information for this article was contributed by Nyssa Kruse and Stephen Simpson of the Arkansas Democrat-Gazette.