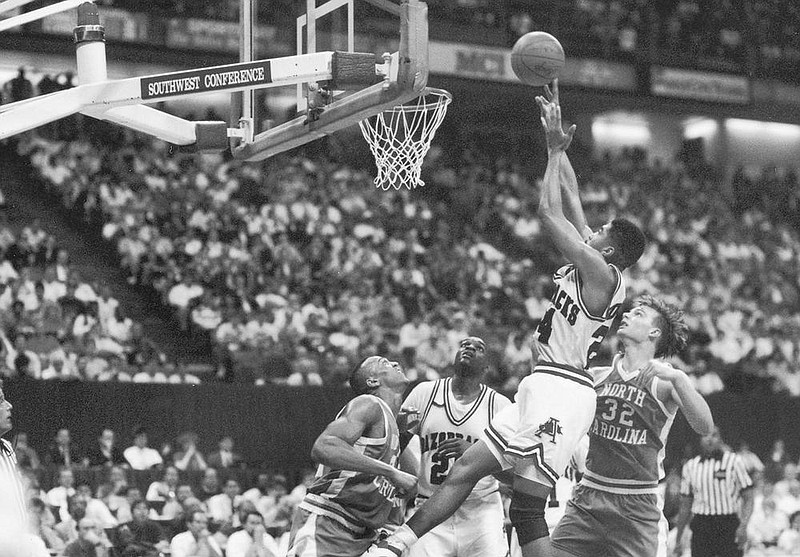 Lenzie Howell (shooting) was the MVP of the 1990 NCAA Tournament Midwest Regional for the Arkansas Razorbacks. Howell died Saturday in his hometown of Dallas at the age of 52. (Photo courtesy University of Arkansas athletics)

FAYETTEVILLE -- Lenzie Howell, who helped get the University of Arkansas basketball team to the 1990 Final Four, died Saturday in his hometown of Dallas. He was 52.

A person in the Dallas County coroner's office confirmed Howell's death, but said the cause wasn't known.

"Lenzie took us to the Final Four," Nolan Richardson, the Razorbacks coach from 1985-2002, said Sunday. "Without him, we don't get there.

"Lenzie no question was a stabilizing force for us as a senior, because we had a very young team. He was the glue guy that held us together."

"Lenzie wore North Carolina out," said Matt Zimmerman, a former Arkansas assistant coach who was a manager on the 1989-90 team. "Then two days later, he played his tail off against Texas.

"I know those games meant the world to Lenzie, but he never talked much about it. He never bragged about himself."

Howell, who played at Bryan Adams High School in Dallas, came to Arkansas as a junior after transferring from San Jacinto Junior College in Pasadena, Texas.

Richardson said he went to San Jacinto to recruit a 6-11 center, but wound up falling in love with Howell's game.

"I found myself watching Lenzie more than I watched the big guy I had gone there to see in the first place," Richardson said. "As a matter of fact, after about 10 minutes, I liked Lenzie so much that I forgot about the big guy.

"Lenzie wasn't heavily recruited. I think we beat North Texas to get him. But he was one of the top players I ever coached."

As a junior, he averaged 14.6 points and 7.0 rebounds. He was voted MVP of the SWC Tournament when he averaged 24.7 points and 10.1 rebounds in the Razorbacks' victories over Rice, Texas A&M and Texas in Reunion Arena.

Howell's averages took a dip his senior season to 13.9 points and 5.4 rebounds when sophomores Todd Day and Lee Mayberry began to emerge as stars. Day averaged 19.5 points and Mayberry 14.5 during the 1989-90 season.

"The thing I remember the most about Lenzie is that he was just a great teammate," said Day, who played in the NBA for eight seasons and is now the coach at Philander Smith College in Little Rock. "He never got upset or jealous of the attention I got or Lee got when we were in the spotlight. He just did whatever we needed him to do."

"I've never had another kid that was 6-4 and could do what Lenzie could do," Richardson said. "At that height he was a tremendous offensive rebounder, and he was a very solid defensive player.

"He could run the floor like a deer. He'd get down that sideline on the fast break and get into the short corner for that little jumper he had, and he was deadly with that shot. When he got the ball on that wing, you could almost put two points up on the scoreboard every time.

"He was an all-around player. He'd give you points, he'd give you some rebounds, assists, steals. He could block shots. He was a good free-throw shooter. He had so many things that he brought to the table. He got you what you needed to have in order to be successful."

In 10 games in Dallas as a Razorback – six in the SWC Tournament, two at SMU and two in the NCAA Tournament -- Howell averaged 19.3 points and 8.1 rebounds.

"Lenzie always played well in Dallas," Day said. "He was excited to put on a show back home."

"Lenzie got overlooked," Day said. "Sometimes teams would focus on me or Lee, and they'd play Lenzie one-on-one. Lenzie killed every team that played us like that."

Howell played professionally overseas for 11 seasons in the Netherlands, Turkey and France. He twice was MVP of the Dutch pro league during the 1990-91 and 1991-92 seasons.

"They thought Lenzie was Michael Jordan over there [in the Netherlands]," Richardson said. "I ran into a guy that had played in that league and knew Lenzie, and he told me, 'Man, he's a big-time player.' "

Richardson said the key to Howell's success was consistency.

"His game didn't go up and down," Richardson said. "He was pretty steady. Just about every outing, you were going to get from Lenzie the maximum of what a player should be giving."

Richardson said that Howell called him about three weeks ago.

"Lenzie just wanted to check in and see how we were doing," Richardson said. "He sounded fine. That's why it was such a shock to hear that he has passed away."

Day got a call on Saturday night informing him of Howell's death.

"It's sad to hear that someone in our Razorback family passed away, but especially at such a young age," Day said. "Lenzie is someone we're going to miss dearly."