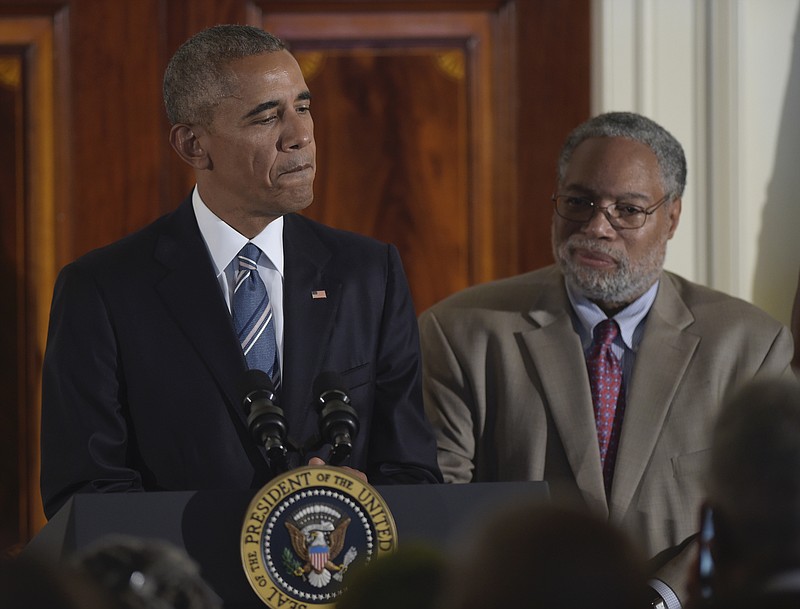 Lonnie G. Bunch III (right) and former President Barack Obama attend a September 2016 reception for the opening of the Smithsonian Museum of African American History and Culture. Bunch will deliver a virtual lecture Aug. 6 on behalf of the Clinton Foundation and the Clinton School of Public Service. (AP file photo/Susan Walsh)

Friday is the deadline to submit art for the Arkansas Arts Council’s 2021 Small Works on Paper touring exhibition. The annual exhibition features the works of artists who are members of the Arts Council’s Artist Registry; works in the exhibition include paintings, photographs, drawings, prints, mixed media and collages, small enough to fit into frames 18 inches square or 18 inches by 24 inches. Find details and submit works at arkansasarts.org/Programs/Small-Works-On-Paper/submit-work.

Lonnie G. Bunch III, secretary of the Smithsonian Institution and previously the director of the Smithsonian’s National Museum of African American History and Culture, will give Frank and Kula Kumpuris Distinguished Lecture, virtually, at 6:30 p.m. Aug. 6 under the auspices of the Clinton Foundation and Clinton School of Public Service. Reserve a “seat” at tinyurl.com/y7dwkp5a or email kumpurislecture@clintonschool.uasys.edu. More information and a link to view the lecture will be sent by email at a later date.

Fayetteville’s Walton Arts Center has postponed touring Broadway shows and performances with audiences of more than 200 until January, rescheduling Procter & Gamble Broadway Series productions of “My Fair Lady” to July 28-Aug. 1, 2021, and “An Officer and a Gentleman” to March 30-April 4.

Center staff will contact ticket holders for shows by Arlo Guthrie, Heather McMahan and Hasan Minhaj and the center’s annual “Art of Wine” once scheduling changes are final.

In the meanwhile, the center will focus on performances for smaller audiences and with appropriate safety measures.

And to counteract the loss of revenue from ticket sales at the center and the Walmart AMP and the ensuing budget deficit of more than $1 million, the center has opened a new Ghost Light Recovery Fund. (The name comes from the theatrical tradition of leaving a light burning in unoccupied theaters to light the way for a safe return to the stage. The center has kept a ghost light on its stage since the suspension of programming in March.) Visit waltonartscenter.org/ghostlight.

The revised eight-production season, all at the Victory Theatre, 116 S Second St., Rogers: