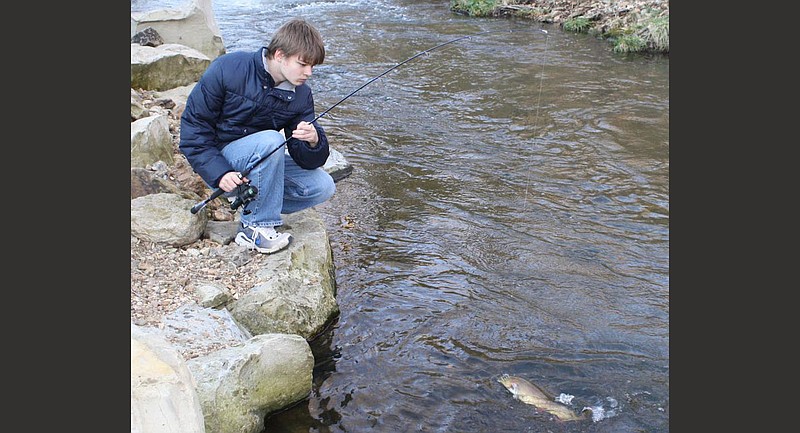 The deep water at the mouths of riffles are the best places to catch the biggest bass and trout in a creek or small river. (Arkansas Democrat-Gazette/Bryan Hendricks)

The secret to being a master angler is knowing how to read water.

Knowing how to cast and how to tie knots are tactical elements, as are knowing what lure to use when and where. The most crucial elements in fishing are strategic. Like a hunter, an angler must know the lay of the land. The difference is that the lay of the land for an angler is obscured by water. Close observation shows you little clues to unlock its secrets.

Rusty Pruitt of Bryant is an avid fly fisherman, and successful fly fishing relies on reading water. When he arrives at a stream, Pruitt does not immediately begin fishing. He sits at the water's edge and he observes. He watches how the water flows, where it swirls, parts and eddies. He notes changes in color that denote depth changes. He also watches to see what kind of flies flit over the surface. It's a bonus when a fully developed fly emerges from the depths and wings skyward. This tells Pruitt what kind of bugs are hatching and emerging. They are what trout are eating that day, and they tell him which fly to use.

It is imperative to read water when stream fishing. Electronic graphs are useless in this arena. The environment elevates you to a higher level that forces you to apply observation, experience and instinct. Liberated from your electronic crutches, you are free to embrace the art of fishing.

Because of its simplicity and because the clues are overt, a stream or river is an ideal place to learn to read water. First, break a stream into components. A highland stream is a classic pool-and-drop configuration. The pool is the main component. Riffles are directly above the pool at the mouth and directly below at the tail. Fish feed in the mouths and the tails, so these are the most productive places to fish.

Approaching a riffle, a pool gradually gets shallow as you near the lip at the mouth. This shallowing, coupled with the narrowing of the riffle, constricts the water flow and forces water to push to the sides. Minnows and crustaceans are plentiful in the sidewaters, but bass and trout hunt in the deeper, swifter water directly above the lip. A lure sitting on the bottom in the open appears vulnerable and helpless. A fish will cover a distance to attack it.

A surprising number of fish also hunt in the riffle, which usually contains a deep channel that cuts against the bank. There are often big rocks in the channel as well as logs, bushes and root wads along the sides. The rocks break the flow and create calm pockets where fish can wait and ambush minnows, bugs, crawdads and other prey without having to fight the current. The water boils and swirls behind rocks. Cast above them and let the current carry your lure into the fish's lair.

Look also for changes in water color. A pocket of emerald water darker than the water in the channel denotes a deep hole. Water eddies vertically and horizontally. This is where the big fish live, at the bottom where the water is still and cool.

Swift water from the riffle plunges into the tail, usually defined by a deep hole with a pronounced vertical eddy. Because the slower water in the pool brakes the swift water exiting the riffle, it causes the water to eddy at the sides. Again, the eddies contain a lot of food, and game fish are always near.

As the pool deepens and widens, you'll notice currents that are faster than the water around them. Even though the pools are seemingly featureless, the bottom holds secrets. There you will find little seams in the stream bed. Fish hover in these subtle funnels where the water is cooler and more oxygenated. They are also excellent ambush points from which fish can dash out and grab prey that gets close.

Eddies within these seams betrays a submerged rock or a snag that breaks the current and creates a deep pocket where fish can hide.

Swirling water, directional deviations and color changes are your main clues that will enable you to solve a stream's mysteries. They are consistent from start to finish.

They also serve you well in larger streams, like the Arkansas River or the lower White River. These features are especially prominent on the Arkansas River with its array of jetties, wing dams and revetments. These structures direct water to the center of the navigation channel, but they create eddies to the sides of the structures and behind. These eddies form hydraulic structure that concentrates food -- especially baitfish -- while providing refuge from current. Water flowing through the dams or barges passing through the locks activate these structures, sometimes only for a few minutes, but if current is present, bass will be there.

Color changes also denote depth in the river. Classic examples are in Lake Dardanelle, where emerald color at the edges of reeds denotes dramatically deep drops. Bass seek refuge from the heat and sunlight in these holes, and from them they venture onto neighboring flats to feed.

More conspicuous clues are in the shallow water of the feeder creeks . They contain submerged stumps, and they look like light discs. You'll sometimes see darker water ringing the stumps. Largemouth bass like those places.

The same features occur in lakes, especially at main-lake points and secondary points. These points denote the ends of landforms that drop into the water. Examine the landform and notice its shape and steepness of its slope. Form a topographic picture in your mind and follow the contours beneath the surface to where the landform meets the main channel.

Look closer and you'll notice current swirling gently past the points. That only happens on reservoirs where water flows through a dam or through hydropower generators. As in streams, current positions fish to the sides and at the ends of points. It also influences how fish relate to deep cover like standing timber and brushpiles. Electronic graphs will show you if fish are present on the structures, but knowing how to read the water will tell you how to approach them.

That concludes the Fishing Master Class. Go and conquer.