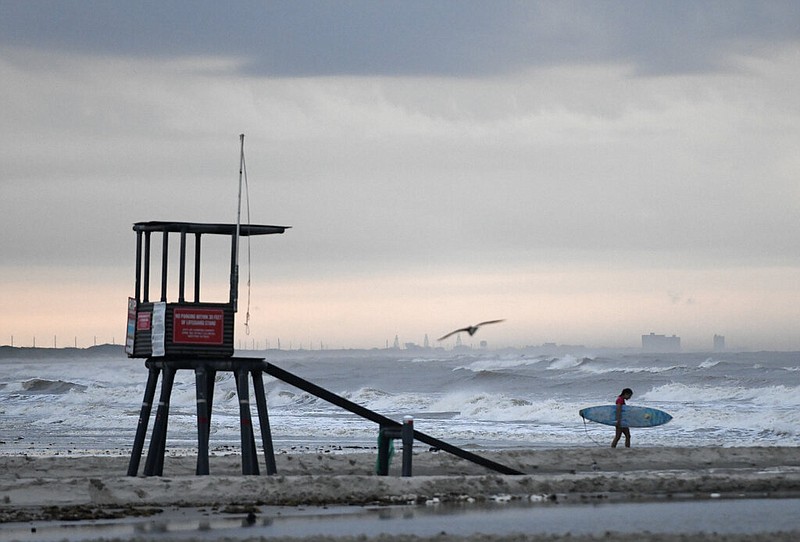 A surfer walks on the beach at J.P. Luby Park in Corpus Christi, Texas, on Friday, July 24, 2020, ahead of Tropical Storm Hanna. The storm is expected to make landfall on Saturday. (Corpus Christi Caller-Times via AP / Annie Rice )

MIAMI — Tropical Storm Hanna has strengthened and is expected to hit the southern Texas coast as a hurricane on Saturday afternoon or early evening, forecasters said Friday night, all while another tropical storm approached the Caribbean.

Hanna was centered about 165 miles east-southeast of Corpus Christi, Texas, the U.S. National Hurricane Center said Friday night. The storm had maximum sustained winds around 65 mph and was moving west at 8 mph.

Forecasters said Hanna could bring 5 to 10 inches of rain through Sunday night — with isolated totals of 15 inches — in addition to coastal swells that could cause life-threatening surf and rip current conditions.

Tropical Storm Gonzalo was also the earliest Atlantic named storm for its place in the alphabet. The previous record was held by Tropical Storm Gert, which formed on July 24, 2005. So far this year, Cristobal, Danielle, Edouard and Fay also set records for being the earliest named Atlantic storm for their alphabetic order.

Gonzalo was moving west at 17 mph while its maximum sustained winds weakened to 40 mph, according to the National Hurricane Center’s Friday night update. It was centered about 285 miles east of Trinidad.

Officials said that those in the Windward Islands should monitor the storm as it is expected to approach the islands Saturday. Some strengthening was possible but the storm is expected to weaken as it moves into the Caribbean Sea.

A tropical storm warning has been issued for St. Vincent and the Grenadines, Tobago and Grenada and its dependencies. Forecasters said Gonzalo could bring 1 to 3 inches of rain, with isolated totals of 5 inches of rain.