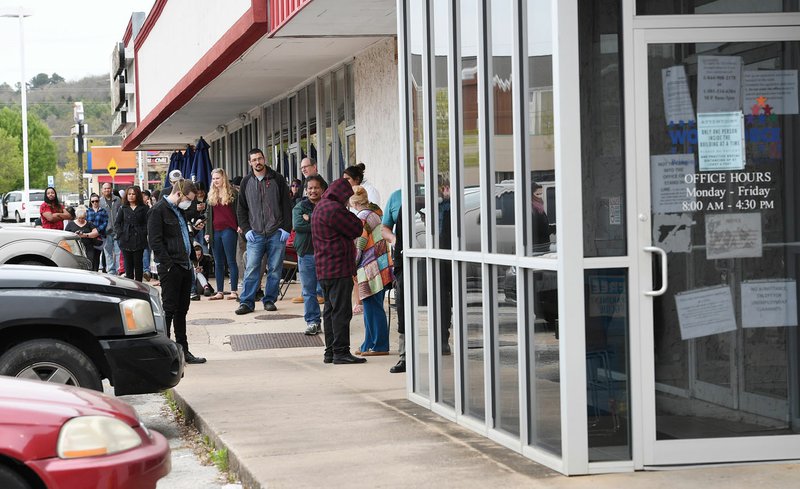 A line of around fifty people extends from the door of Arkansas Workforce Center Monday in Fayetteville. For information about small business loans and applying for Arkansas, unemployment benefits go to www.arkansasedc.com/covid19. For daily photo galleries visit nwaonline.com/200320Daily/. (NWA Democrat-Gazette/J.T.WAMPLER)

FAYETTEVILLE -- Area law enforcement agencies are receiving calls from people who say their names and other personal information has been used to make fraudulent unemployment claims.

"We take multiple calls on that every day," Officer Keith Foster, spokesman for the Rogers Police Department, said Friday.

Foster said a check of the departments calls for Thursday showed 12 reports of unemployment fraud.

"Every day before that is going to be about the same," he said.

Foster said this particular scam has become more widespread since the federal government made additional unemployment benefits available in response to the covid-19 pandemic. He said it has become fairly common in Rogers.

"It started with teachers and has made its way through police and firefighters and city employees," Foster said. "It's everywhere."

The Springdale Police Department has received at least 50 such calls in the last 10 days, according to Lt. Jeff Taylor, spokesman for the department. City Attorney Ernest Cate said anyone involved in such a scheme would be charged with a felony.

"Most of them are attempts. People are getting notices in the mail or from their employers that they have supposedly filed," Sgt. Autumn Holland, with the criminal investigation division of the Sheriffs Office, said Friday.

Holland said the Sheriffs Office has received more than 70 calls on unemployment insurance fraud since June. She said the calls prompted her to put together a checklist of steps people can take if they are victims of identity theft.

Kelly Cantrell, public information officer for the Sheriff's office, said she posted information on this kind of scheme on the Sheriff's Office Facebook page July 8. That post included a link to a news release from the FBI giving information about the scheme and ways to reduce the risks of being victimized.

The state Division of Workforce Services said Wednesday it has found an "uptick" in fraudulent unemployment claims, but gave no details.

"Over the past few weeks, Arkansas, as well as several other states, has recognized an increase in reports filed for fraudulent unemployment claims and identity theft," the division, which is part of the Department of Commerce, said in a news release.

Connor Hagan, with the FBI office in Little Rock, confirmed this type of fraud and identity theft has been more widespread since the covid-19 pandemic began.

Hagan said the agency doesn't typically keep a running tally of types of crimes so no numbers are available, but this scam has been brought to his attention by numerous other agents.

"I know it's big enough that our agents have come to me and said we need to push something out on this," he said.

Hagan said the scam is nationwide.

"A lot of times these crimes of identity theft they go through almost geographically," he said. "We might see it start on the East Coast and it will sweep down to Florida. It's almost a geographic wave. It's very targeted."

Hagan said anyone who has been victimized or who thinks he may have been needs to contact his financial institutions immediately.

"A lot of them have programs that can help. They can send you an email if there's a suspicious transaction and you can reply to either say yes it was you or no it's not."

The FBI advises people to be aware of suspicious activity that may indicate they have been victimized in a fraudulent unemployment insurance claim.

The agency said people need to watch for communications regarding unemployment when they have not applied, unauthorized transactions on bank or credit card statements, any fees involved in filing or qualifying for unemployment insurance, unsolicited inquires related to unemployment benefits, fictitious websites and social media pages mimicking those of government agencies.