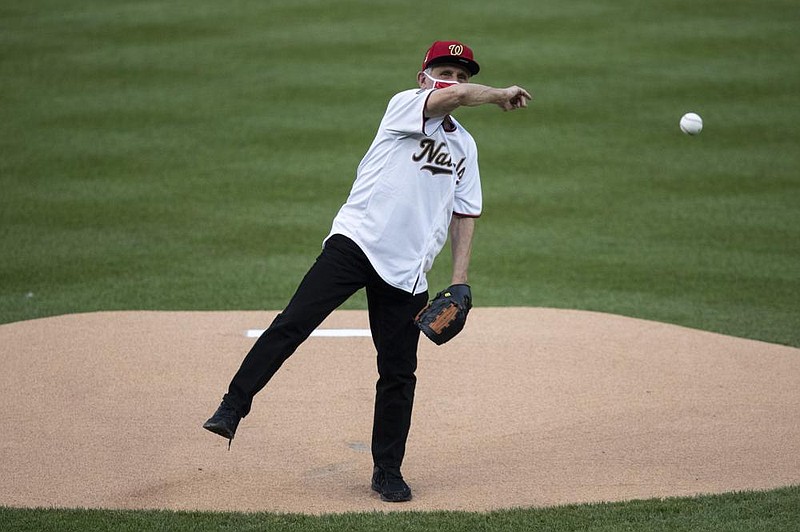 Dr. Anthony Fauci, director of the National Institute of Allergy and Infectious Diseases, threw out the ceremonial first pitch before the Washington Nationals’ home opener against the New York Yankees on Thursday. Fauci’s pitch came up short and to the left of home plate. (AP/Alex Brandon)

NEW YORK -- Baseball fans will now remember National Institute of Allergy and Infectious Diseases chief Anthony Fauci for something no one could catch -- his dreadful opening day pitch.

The Brooklyn native who is a Washington Nationals fan came up short and way to the left Thursday when he tossed out the first pitch to finally start the long-postponed baseball season with a showdown between the Yankees and his Nats. While Fauci's symbolic pitch to reopen the country was both memorable and forgettable, the doctor added his name to a lineup of proud Americans to have tossed a ball into play.

Arguably one of the most significant opening pitches to start a game was thrown in Yankee Stadium on Oct. 30, 2001, when President George W. Bush threw a perfect strike to start Game 3 of the World Series.

The pressure couldn't have been higher for the former owner of the Texas Rangers baseball team. America had just been rocked by the terror attacks of 9/11 and was in need of a morale boost. New Yorkers were leery of large crowds, wondering what might happen next. And adding to Bush's troubles, one of the greatest Yankees in history was badgering him.

"Don't bounce it, they'll boo you," Derek Jeter warned him before the game.

The Yankee Hall of Fame shortstop raised the stakes even higher by pressuring the 55-year-old president to throw the ball from the mound like a real Major League ace, rather than shortening the distance as civilians often do for the ceremonial pitch.

Wearing a bulletproof vest even, Bush threw a strike right down the middle of the plate. Perfect. It was surely one of the greatest moments of his political career, maybe even his life.

"Standing on the mound at Yankee Stadium was by far the most nervous moment of my presidency," he confessed in an ESPN documentary called "First Pitch."

One of the worst opening pitches in baseball was thrown by "In Da Club" rapper 50 Cent. In May 2014, the South Jamaica, Queens, native -- born Curtis James Jackson -- was given the honor of throwing the pitch that would kick off a game between his Mets and the Pittsburgh Pirates. It landed nowhere near home plate and nearly bounced into a row of photographers.

"What can you say?" an announcer asked.

Singer Carly Ray Jepsen didn't do much better when she tossed out the first pitch in July 2013. The Canadian crooner's toss barely cleared the pitcher's mound before a Tampa Bay Rays game. An announcer at that game credited her for giving a "great effort."

Barack Obama is known to be a decent basketball player, but before the 2009 All-Star Game in St. Louis, he learned what fellow Chicagoan Michael Jordan could have told him: hardwood skills don't always translate to the baseball diamond. Obama's opening pitch wasn't bad. It fell a couple inches short of the plate, but Albert Pujols, who was on the end of the throw, made the left-handed president look good. However, it was a stylist Obama needed.

The 44th president sported a Chicago White Sox windbreaker with a pair of baggie "mom jeans" that became the talk of the sports, political and fashion worlds.

"We do a lot of tough stuff as president. And by definition you don't end up being president if you don't handle stress well, he reportedly told ESPN."Nothing is more stressful than throwing a first pitch."

Jordan also threw a terrible first pitch in 1998 before the Chicago Cubs one-game playoff against the San Francisco Giants in 1998. The 6-foot-6 NBA superstar tossed a line drive that sailed way over the catcher's head, then smiled, and jogged to the plate to shake the hand of Sammy Sosa, who was unable to make the catch. The Cubs won the game.

Olympic gymnast Simone Biles showed she's at least a two sport athlete when she threw out the first pitch of game two in the 2019 World Series. In front of her hometown crowd in Houston, the gold-medal winner put on quite a show, first doing a spinning backflip, then having the ball handed to her so she could stick the landing with a solid lob between the batters boxes.

It didn't seem like a big deal when San Francisco 49ers quarterback Colin Kaepernick threw an opening pitch in a June 21, 2013 game between the San Francisco Giants and Florida Marlins. He was a pitcher in high school who was drafted by the Chicago Cubs and had led the Niners to the Super Bowl earlier that year. The guy has a cannon for an arm. His fastball topped out at 92 mph in his baseball prime.

But it was his knee that got him in trouble. Kaepernick began kneeling before games to protest social injustice and no NFL team has touched him since 2017. He'll be remembered as one of the most important sports figures of his generation, even if he never touches another baseball or football.