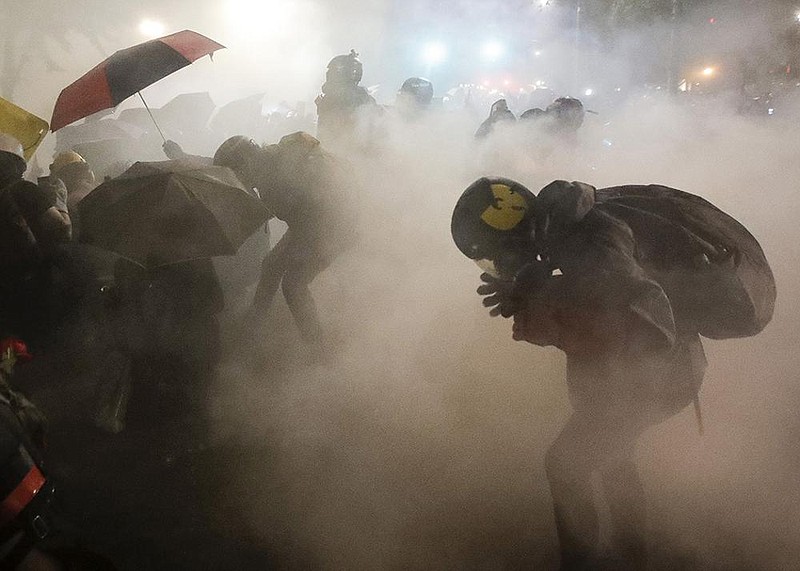 PORTLAND, Ore. -- As rioting continued in Portland, protests also took a violent turn in several other U.S. cities over the weekend, with demonstrators forcing police in Seattle to retreat into a station house and setting fire to vehicles in California and Virginia.

In Seattle, police officers took shelter in a precinct station early Sunday, hours after large demonstrations in the city's Capitol Hill neighborhood. Some demonstrators lingered after officers filed into the department's East Precinct, but most cleared out a short time later, according to video posted online.

In Portland, police described via Twitter the "violent conduct of people downtown" as creating a "grave risk of public alarm." Police demanded people leave the area surrounding the city's federal courthouse about 1:20 a.m. Sunday after protesters breached a fence surrounding the building where U.S. agents have been stationed.

By 1:40 a.m., both federal officers and Portland police could be seen on the streets surrounding the courthouse, attempting to clear the area and deploying tear gas.

Protesters remained in the streets past 2:30 a.m., forming lines across intersections and holding makeshift shields, as police patrolled and closed blocks abutting the area. Multiple arrests were made, but it wasn't immediately clear how many.

In the hours leading up to the riot declaration, thousands of people had gathered in the city for another night of protests as demonstrations showed no signs of abating. They began in the wake of George Floyd's killing in police custody in Minneapolis over Memorial Day weekend and now include protest over the presence of federal agents sent by President Donald Trump.

But Mark Meadows, the White House chief of staff, Sunday defended the presence of federal agents, saying they're protecting a courthouse targeted by protesters.

"It has not only been vandalized, but they're trying to burn it down," he said on ABC's "This Week." "We can't have this in American cities. You've got people there and fencing there, but they're throwing Molotov cocktails, and doing all kinds of rioting."

Crowds began to march toward the courthouse Saturday night, some marching from 5 miles away. A large group of demonstrators in the North Portland neighborhood also paraded by the police precinct there, which was roped off and had officers in riot gear standing outside the building.

A Marriott hotel was shut down and guests were asked to leave after hundreds of protesters demonstrated outside because it was believed that federal agents were staying there. The crowd waved signs with messages such as "No more brutality!" as they stood on the riverside parkway outside the hotel and chanted: "Kick them out, Marriott!" A manager said the building had sustained some "minor damage," including graffiti on exterior walls.

As protesters marched down the streets, the Portland Police Bureau posted on social media for people to not walk or block the street as they could be subject to charges such as disorderly conduct and interfering with peace officers.

Hundreds of others crossed the Steel Bridge to the courthouse, meeting up with thousands of people who had already been tear-gassed by federal agents.

The fence surrounding the building had flowers and banners draped across as federal agents emerged from the courthouse to inspect it. They were met with fireworks shot over the fence.

Federal agents tossed canisters of tear gas at the crowd, while people ran towards the plumes, picked up some of the canisters and threw them back over the fence.

As some protesters attempted to cut the fence using power tools, streams of pepper spray were spewed at the crowd.

At the nearby Justice Center, images and words were projected onto the building including "Keep fighting. Keep pushing."

During demonstrations Friday, federal agents repeatedly fired tear gas to break up rowdy protests that continued into the early morning Saturday. Authorities say six federal officers were injured and one person was arrested.

Demonstrations have happened in Oregon's largest city nightly for two months since Floyd was killed in Minneapolis in May. Trump said he sent federal agents to Portland to halt the unrest but state and local officials say they are making the situation worse.

There were demonstrations for police reform and against the increased presence of federal law enforcement in cities across the country Saturday. In Seattle, police declared a riot Saturday afternoon after large demonstrations and deployed flash bangs and pepper spray to try to clear crowds. Authorities made more than 40 arrests and said 21 officers suffered mostly minor injuries.

"Across the country people are committing violence, supposedly in support of Portland," Lovell said. "If you want to support Portland, then stop the violence, work for peace. Portland police officers and police facilities have been threatened.

"Now more than ever, Portland police need your support. We want to be with you in the community and working on the real relationships that will create change. We want to get back to the critical issues that have been hijacked by people committing crimes under the cover of the crowds."

At a late-night news conference, Seattle Police Chief Carmen Best also called for peace. Rocks, bottles, fireworks and mortars were fired at police during the weekend unrest, and police said they arrested at least 45 people for assaults on officers, obstruction and failure to disperse. Twenty-one officers were hurt, with most of their injuries considered minor, police said.

Late Friday, a federal judge denied a request by Oregon's attorney general to restrict the actions of federal police.

Craig Gabriel, assistant U.S. attorney for the District of Oregon, said at the news conference that of the six federal officers who were injured, one suffered a concussion and another was taken to the hospital for burns.

He said one person was arrested for failing to comply with orders. That person was later released without charges, bringing the total number of people arrested on or near the courthouse property since early July to 60.

Around the country, the violence stemmed from the weeks of protests over racial injustice and police treatment of people of color.

In the Texas capital of Austin, Garrett Foster, 28, was shot and killed Saturday night by a person who had driven through the march against police violence.

Austin Police Chief Brian Manley said a car turned onto the block where protesters stood and honked its horn. The driver and several witnesses told police that Foster approached the driver and pointed an assault rifle at them.

In video streamed live on Facebook, a car can be heard honking before several shots ring out and protesters start screaming and scattering for cover. Police could then be seen tending to someone lying in the street.

Manley said the driver called 911 to report the incident and was later taken into custody and released. Police didn't immediately identify the driver.

Sheila Foster, Garrett's mother, said she was told her son was pushing his fiancee, who uses a wheelchair, through an intersection when the suspect was driving "erratically" through the crowd. She said she was told the driver shot her son three times.

"Someone dying while protesting is horrible," Mayor Steve Adler of Austin said in a statement. "Our city is shaken and, like so many in our community, I'm heartbroken and stunned."

In the Denver suburb of Aurora, meanwhile, a protester shot and wounded someone after a car drove through a crowd marching on an interstate highway, police said. The wounded person was taken to a hospital in stable condition. Police didn't release many details about the shooting, including whether the person who was shot had been in the car. Police said on Twitter that demonstrators also caused "major damage" to a courthouse.

In Virginia's capital, Richmond, a dump truck was torched as several hundred protesters and police faced off late Saturday during a demonstration of support for the protesters in Portland. Police declared it to be an "unlawful assembly" and used what appeared to be tear gas to disperse the group. Five people were arrested and charged with unlawful assembly. A sixth person was arrested and charged with rioting and assault on a law enforcement officer.

In downtown Atlanta on Sunday, federal agents examined damage to an Immigration and Customs Enforcement facility where windows were shattered late Saturday. No arrests had been announced.

Protesters in Omaha, Neb., marched to bring attention to the killing of a Black man killed by a white bar owner. Police came out in force Saturday night and detained more than 75 people who were marching downtown, obstructing traffic, according to local news reports. While there was no major damage, police Capt. Mark Matuza told the Omaha World-Herald that the gathering "leaned toward the potential of getting violent."

In Los Angeles, police fired projectiles at activists protesting near a federal courthouse.

And in Baltimore, people from a group of nearly 100 demonstrators spray-painted anti-police messages on a Fraternal Order of Police building and adjacent sidewalks Saturday night, The Baltimore Sun reported.

Information for this article was contributed by Jeff Martin, Gillian Flaccus, Sara Cline, Sally Ho and Chris Grygiel of The Associated Press; and by Gregory Scruggs, Christian Davenport and Marissa J. Lang of The Washington Post. 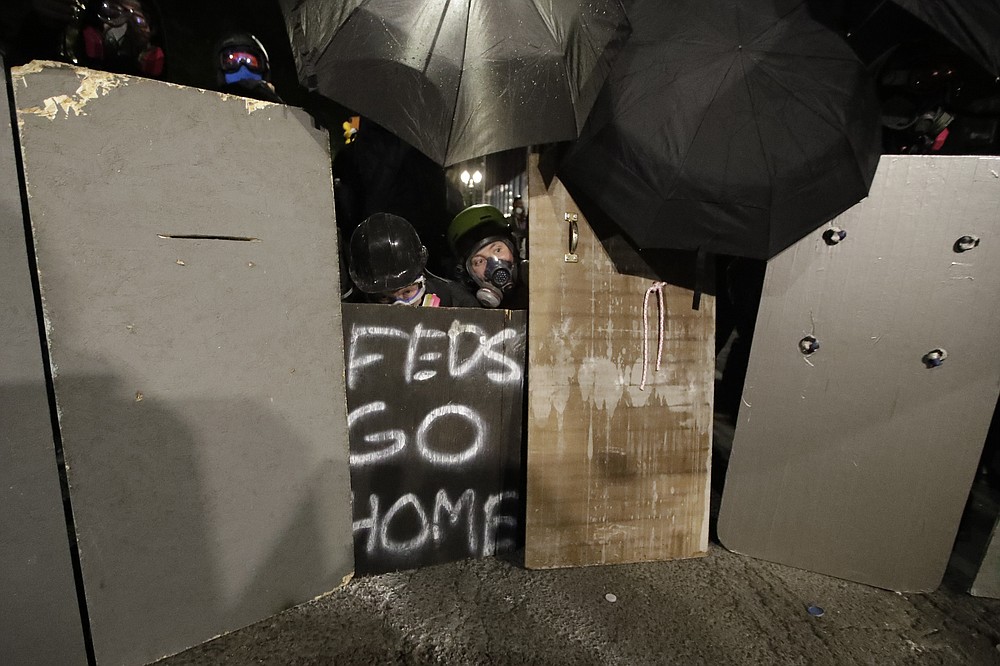 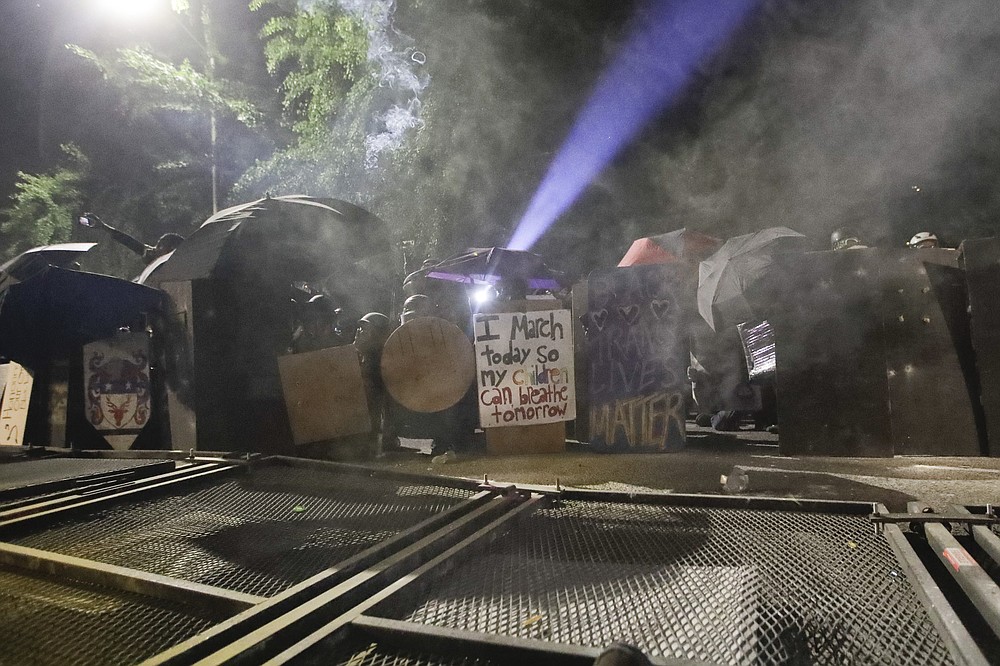 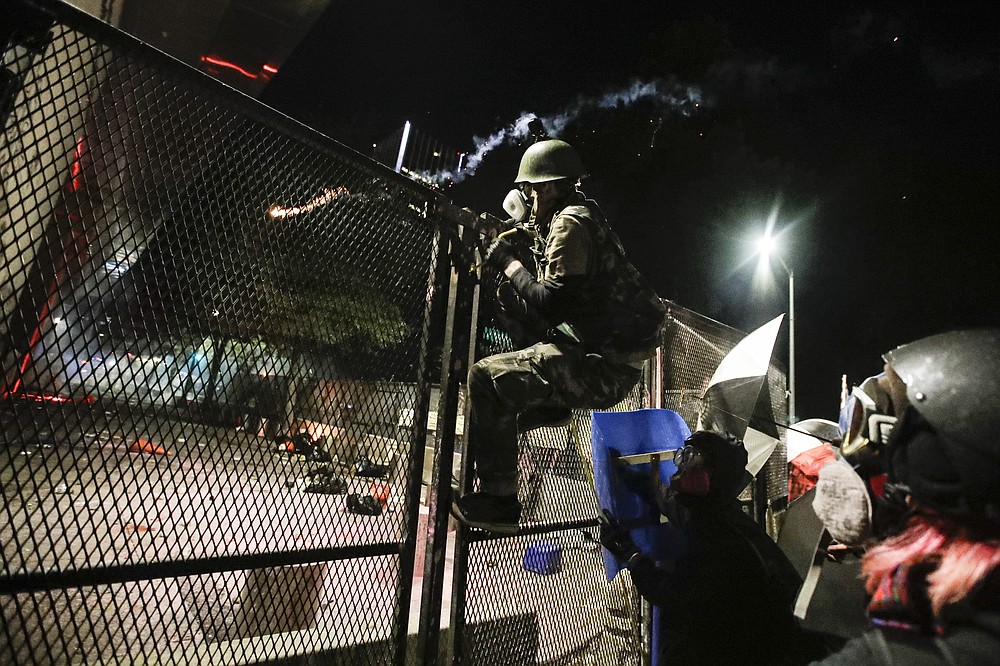 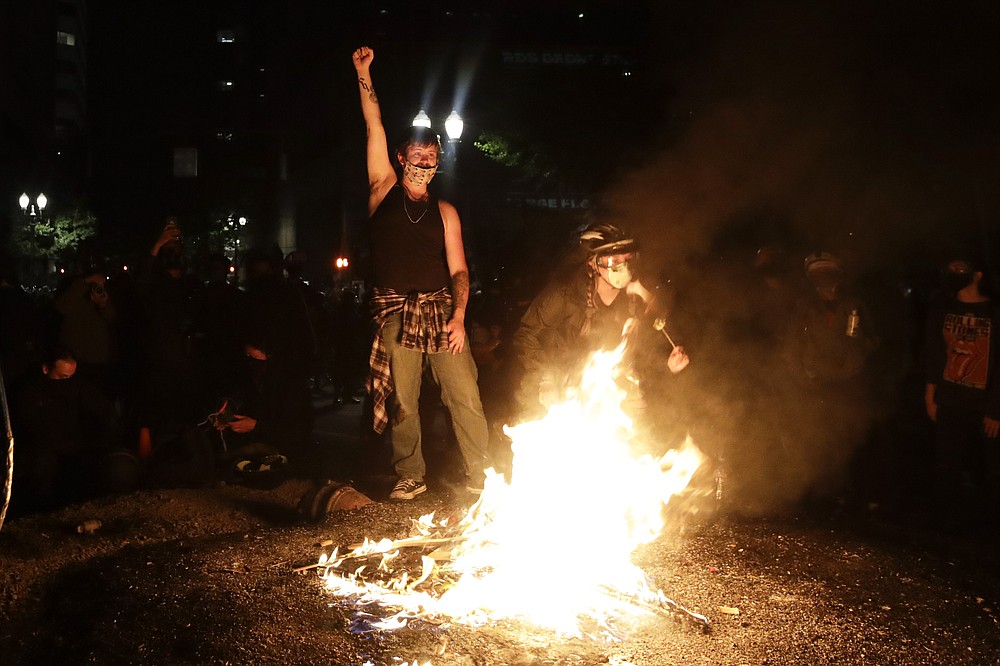 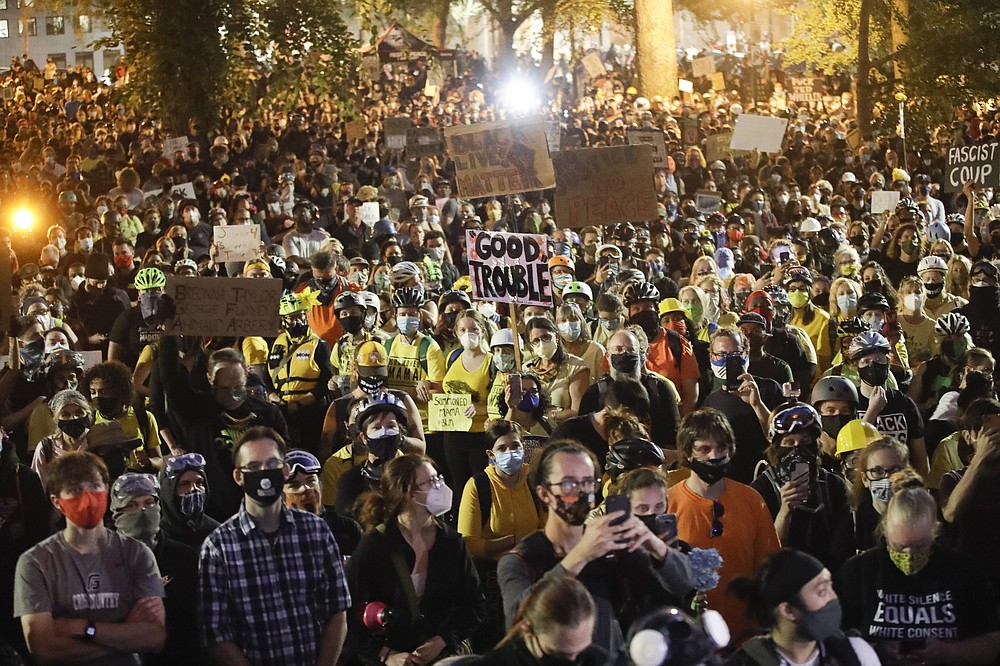 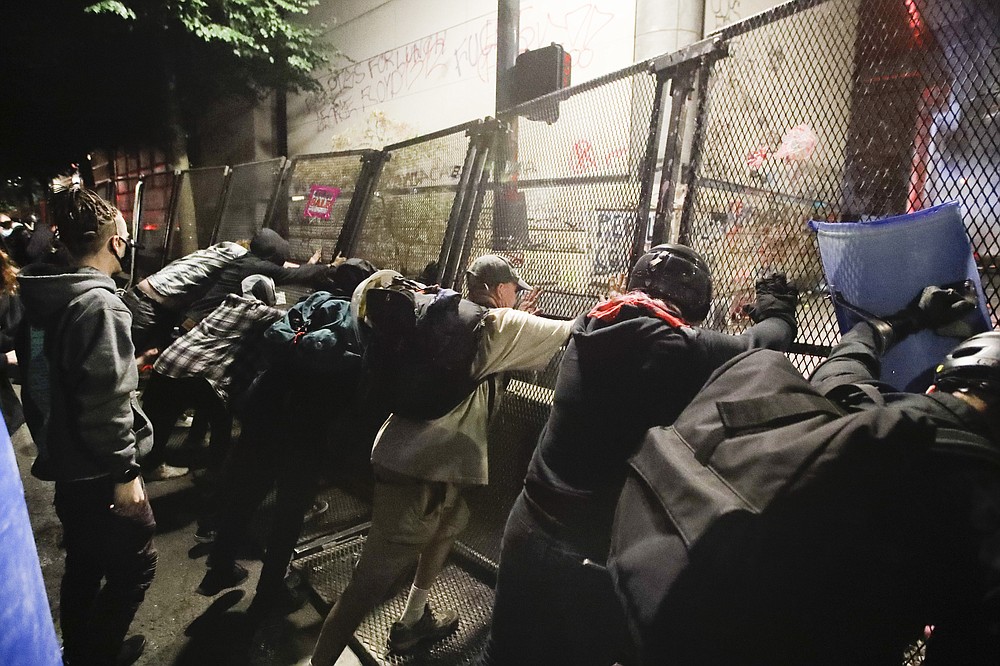 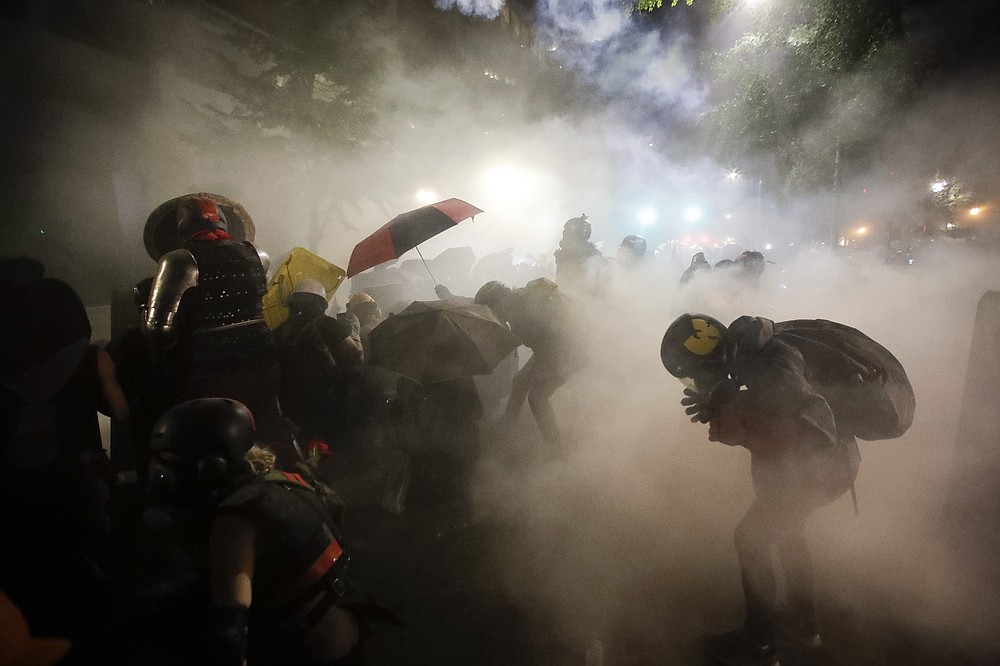 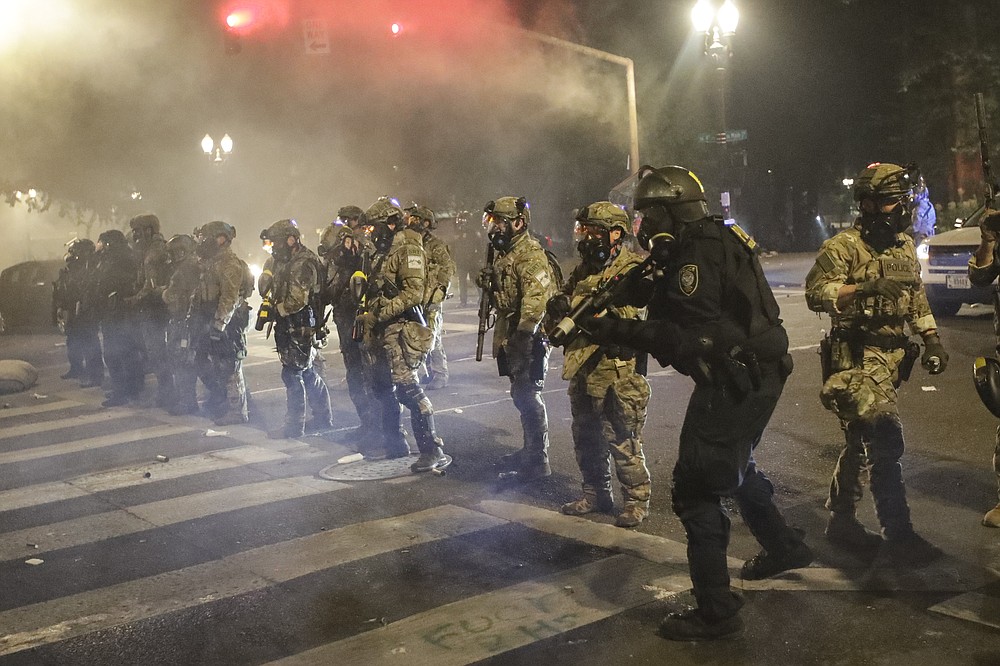 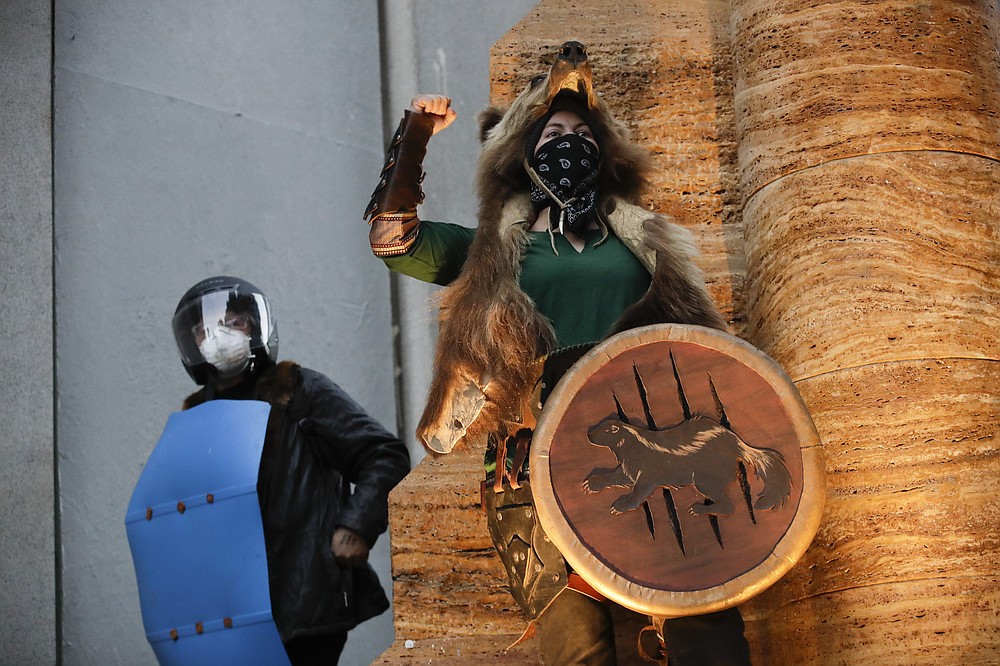 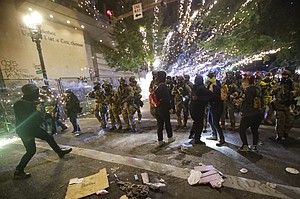 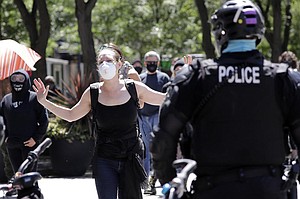 Photo by AP
A protester gestures Sunday as she talks with police in Seattle, where a small group of demon- strators gathered to protest against U.S. Immigration and Customs Enforcement. More photos at arkansasonline.com/727portland/. (AP/Elaine Thompson)
ADVERTISEMENT