Foley: No panic yet with team 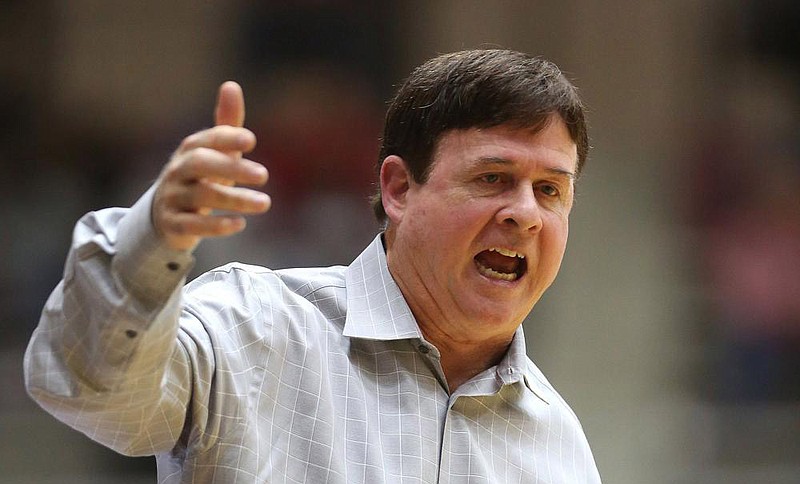 UALR head coach Joe Foley calls a play during the third quarter of the Trojans' 68-55 win on Saturday, Feb. 2, 2019, at the Jack Stephens Center in Little Rock. (Arkansas Democrat-Gazette/THOMAS METTHE)

The University of Arkansas at Little Rock women's basketball team is scheduled this fall to face the pinnacle of the sport: UConn.

For UALR Coach Joe Foley and the Trojans, it doesn't get much bigger than playing the Huskies. But with the ongoing coronavirus pandemic that has put collegiate athletics on hold, the Trojans' yet-to-be-finalized date against UConn along with their entire season, is up in the air.

Foley is unsure if his team will be playing in the fall, but for the first time since the Trojans' season was canceled in March, he's been able to hold organized practices after the team's facilities reopened July 20.

And more than anything, Foley is happy to see his players interacting again. He's not worried about the upcoming season or his players being behind schedule.

"It's kind of depressing when you have to sit at home, and you can't get out, and you can't be with your teammates, and can't be doing the thing that you love," Foley said. "I think they realize how much they missed basketball after it got canceled last year.

"We're equal with everybody else and that's all you want. I think everybody is a little bit farther behind then what they normally would be at this time. But I don't think anybody's panicking. I think everybody just wants to be able to play this year and have a season."

Foley said one thing that has given him and his players hope is the success the NBA and WNBA have had in containing the virus within their respective bubbles. He acknowledges that both leagues are vastly different than the NCAA in terms of quantity and resources, but just the fact basketball is being played allows his team to be hopeful for the future.

"Anything athletics right now that's being successful gives everybody a little bit of hope," Foley said. "Even though we can't build a bubble, I think if all college teams realize how careful they've got to be and what we need to be doing as a general public in taking care of each other, I think it gives them a sense of, 'Hey, we've got to do this the right way or we're not going to get to play.' So I think it's a good thing what the pros are doing, showing how careful you have to be.

"We've got to create a bubble of sorts, college athletics do. Each program has to. And if each program doesn't do this, then it's going to affect the whole country."

UALR is currently scheduled to play, not only UConn, but also Oklahoma State, Vanderbilt and the University of Arkansas this year. With a relatively young team -- only one senior and five freshmen-- Foley could use a tough nonconference slate to help prepare his team for the Sun Belt Conference.

But for now, Foley, like everyone else, just wants to compete again.

"The longer it goes and the more doubt that there is that the kids see, the harder it's going to be to stay motivated," Foley said. "If we go and start school and start having problems and they have to move the season, I think you're going to lose a little bit of that momentum that they've got right now. But I think the overriding thing right now is that everybody just wants to play. So as long as there's hope, I think we can do a good thing."