REVIEW: ‘Summerland’ gives us a sanitized lesbian affair through flashbacks 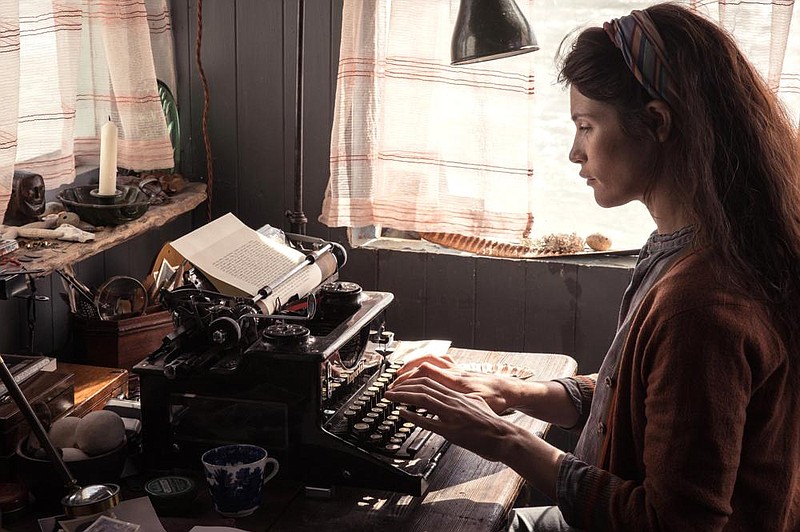 Alice Lamb (Gemma Arterton) snaps away at her typewriter in Jennifer Swale’s “Summerland,” a sweet but sanitized look at a life during wartime in an English village far from the fighting.

Jennifer Swale is a young English playwright and theater director who is making her cinematic directorial debut with "Summerland," a movie she also wrote.

It stars Gemma Arterton, whom Swale previously directed on stage, in the title role of her play about Nell Gwyn (the play was called "Nell Gwyn"), a Restoration-era celebrity who became one of the first women to act on the British stage and later became mistress to King Charles II. (If you look up her entry in Wikipedia you will notice that "Protestant whore" redirects to her page.)

The movie also stars Gugu Mbatha-Raw, who originated the role of Nell Gwyn at London's Globe Theater in 2015, the year before Arterton took it on.

It would seem to make sense that a first-time movie director coming from the theater might want to work with people she's known and worked well with before. Dave Franco cast his wife, Alison Brie, in his directorial debut "The Rental"; Brie's performance was one of the highlights of the ensemble dramedy/horror film, and the production had an intimate, relaxed feeling that made it easier to believe in and care about the characters onscreen.

And while "Summerland" is superficially much more complex than "The Rental," operating in three different timelines, it is also of small ambition. "The Rental" wants to be a smart meditation on the friends who go off on holiday and something horrible happens genre, and "Summerland" has similarly modest goals.

It is mainly set during World War II on the homefront, in a small coastal village in Kent upon which no Nazi would waste a bomb. It means to be sweet and sentimental, but with a bitter droning note in the bottom, the understanding that the seemingly far-off war has an unavoidable gravity that pulls on souls like the moon on tides.

It is made for people stirred by grace under pressure, who remember -- or have at least heard of -- the Blitz and how Londoners stood it, with stiff lips and black humor. Like "The Rental," "Summerland" is a dressed-up genre exercise. It doesn't mean to blow anyone's mind or challenge anyone's assumptions, preferring to provide pretty pictures of chalky cliffs and give some expert actors (Tom Courtenay, Penelope Wilton, Siân Phillips and Amanda Root have supporting roles) a chance to convince you that what you're seeing is something more than a pleasant diversion.

It begins in 1975, with writer Alice Lamb (the always welcome Wilton) typing away when she's interrupted by door-knocking children collecting for charity to "help the aged." She abruptly tells them to "bugger off" and we immediately cut back to the same typewriter, 30 years earlier, with Alice now played by Arterton, who also shouts at children and conspires to destroy their dreams of obtaining rationed chocolate. With her unruly hair, Lamb stamps around the village like a wet Katharine Hepburn, drawing the eye rolls of disapproving locals, whose children insist she's a witch.

Alice doesn't do much to discourage that impression, living alone on the outskirts of town, writing "academic theses" on folklore and investigating a strange phenomenon where the clouds take on the appearance of an "island in the sky." She's gruff and independent and eccentric, so we know she's golden at her core.

It's not that she doesn't like children. They just make her tired. Perhaps she hasn't met the right one yet.

Another of her character traits is an indifference to practical matters, so she misses the letter informing her that a young boy evacuated from bomber-besieged London will be billeted with her. So when Frank (Lucas Bond), a remarkably cheerful kid under the circumstances who has his own enthusiasms for model airplanes and pet rats, shows up at her doorstep, she's got no choice but to put him up until other arrangements can be made. The tinkling of piano keys on the soundtrack hint that soulful, guileless Frank will be around for a while.

And sure enough, he's around long enough for Alice to develop a fondness for him, and she tells him of her lost true love, her university affair with Vera (Mbatha-Raw), who eventually left her because she wanted a "respectable" relationship -- a heterosexual marriage and children. (So that's what Alice has against the little buggers.)

Unfortunately, the flashback feels curiously sanitized, and Mbatha-Raw is under-used as a kind of notional dream girl, a not-quite-real person who might have existed only in Alice's imagination. Could a mixed-race lesbian relationship really have unspooled so effortlessly in '20s Britain? I will re-consult my Evelyn Waugh.

As potentially rich as this material might seem, the affair is played as simple and innocent, but even viewed through the scrim of Alice's nostalgia, this feels a little too pretty. This is a film so nontransgressing it deserves its PG rating; even the lovers' single chaste kiss is partially obscured.

This might constitute progress -- usually lesbian relationships are prepared as bait for the male gaze in the movies -- and there is something refreshing in Swale's pointed refusal to play that card. And race is hardly an issue in this movie, which led me to wondering whether British attitudes on the subject were really all that more progressive than American ones in the early 2oth century (I tend to think they weren't, but that might be my cynicism and ignorance at work), or whether "Summerland" employs the same sort of colorblind casting as "The Favourite" and the Hulu series "The Great."

(And, in the recent BBC production of Agatha Christie's "The Pale Horse" set in 1961, the mixed-race actor Georgina Campbell plays the aristocratic antique dealer Rufus Sewell's unlucky first wife. Is that progress, or could such a couple have existed without raising eyebrows at the time? Maybe.)

On whole, we should congratulate Swale and company for making an attractive movie about a woman who is nicer than she appears to be, living in a tidy (too tidy, if you ask me) town that, even though it's far from where the bombs are dropping, feels the repercussions. 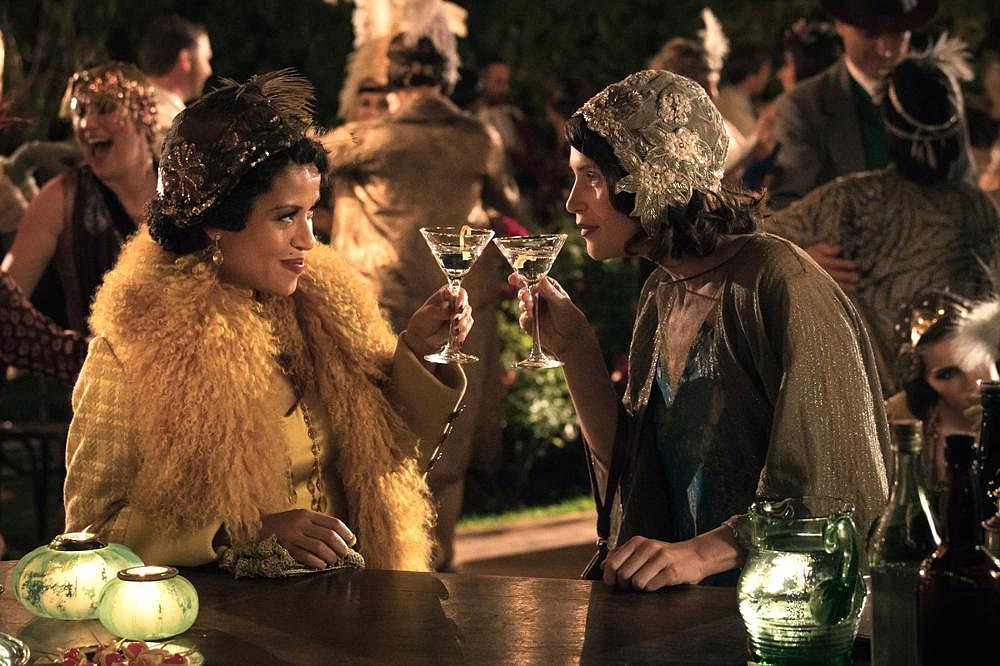 Vera (Gugu Mbatha-Raw) and Alice (Gemma Arterton) meet up and find they have things in common during their university days in the very pretty but modest “Summerland.” 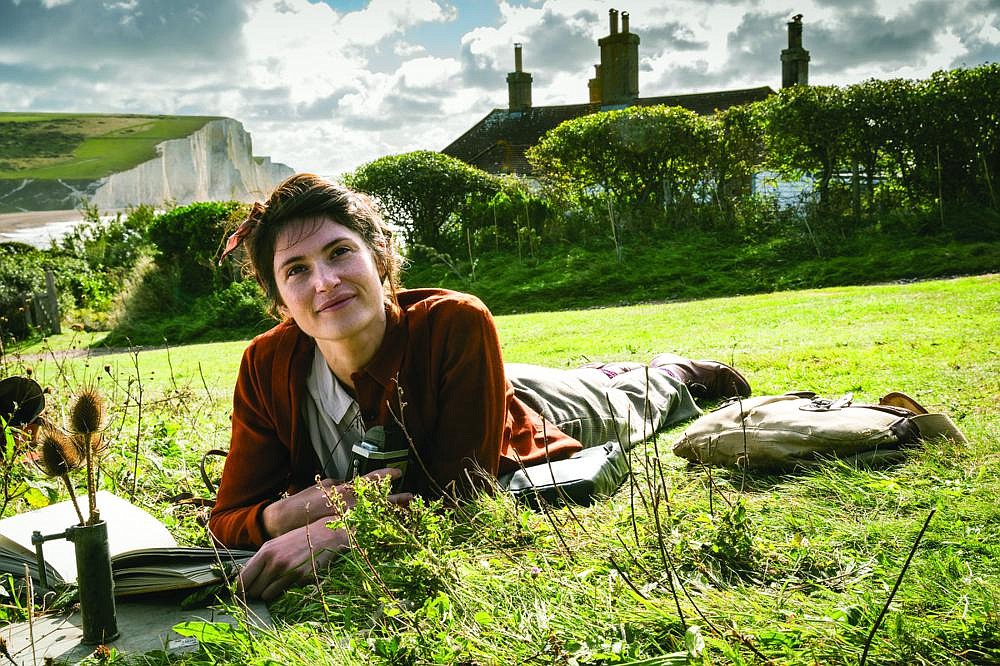 Alice Lamb (Gemma Arterton) is a misfit writer producing “academic theses” in a quiet but anxious corner of England during World War II in “Summerland.”
ADVERTISEMENT