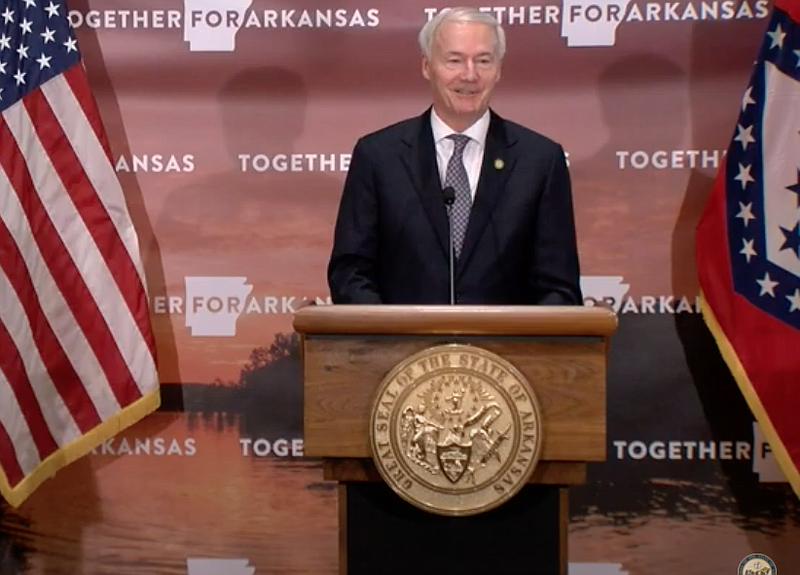 Arkansas Gov. Asa Hutchinson speaks to reporters at the state Capitol in Little Rock on Friday in this still of video provided by the governor's office.

The total number of people who have died as a result of the virus rose to 453, Hutchinson said.

Romero said the number of active cases reached 6,645, including 75 from nursing homes, 329 in correctional facilities and 6,241 from the general population.

Monday is the first date for fall practice on the Arkansas Activities Association's 2020-21 calendar. Teams will be allowed to wear helmets through Aug. 7.

Hutchinson has asked the AAA to submit a plan to the Arkansas Department of Health on what the association will do for the 2020 season as far as practices and games.

An advisory group led by Arkansas Surgeon General Dr. Greg Bledsoe will meet beginning Monday to help assist the state Health Department on football, as well as volleyball and cheerleading.

Hutchinson and Romero said guidelines will also be issued for band and choir.

Schools throughout the state are set to open Aug. 24. The first day of the high school football season is scheduled for Aug. 27, with a pair of state champions, Pulaski Academy (Class 5A) and Joe T. Robinson (Class 4A) meeting at Joe B. Hatcher Stadium in Little Rock.

Hutchinson said 7,207 tests were conducted in the previous 24 hours, a higher number than most recent days as testing at commercial labs has slowed due to a shortage of testing materials and subsequent backlog of specimens.

The figure more closely resembles the level of testing conducted in June and early July. Hutchinson said Friday’s increased testing was good news because, despite the comparatively high number of tests performed, the number of confirmed cases remained consistent with recent single-day totals.

Counties with the highest number of new cases included Sebastian with 81, Pulaski with 77, Benton with 51, Washington with 41, Independence with 31, Crittenden with 29, Union with 29, Mississippi with 25, Jefferson with 23, Saline with 21 and Craighead with 20.

The total number of coronavirus cases reported in Arkansas remained at 41,759 Friday morning, according to a state website. The death toll remained at 442.

[Video not showing up above? Click here to view » https://www.youtube.com/watch?v=2tWz3oweqkw]