Mothers’ book explains how kids can fight the new coronavirus 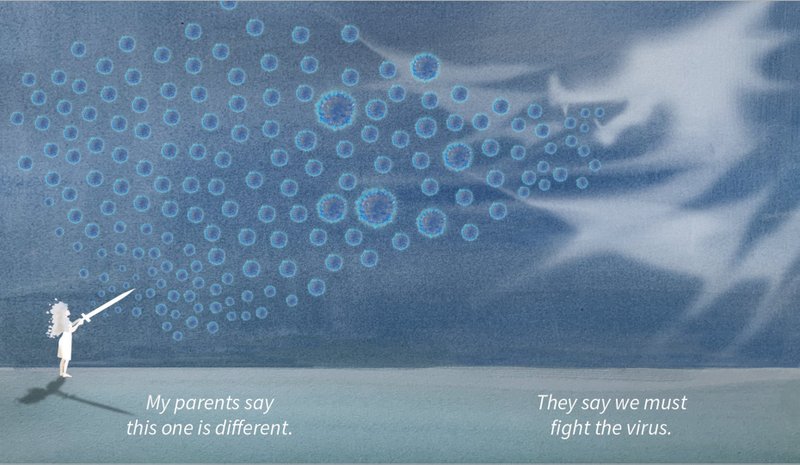 Written by Jen Holman and Kristina Bondurant of Little Rock and illustrated by Cary Smith, whose family is stationed in Germany, Mira Does Her Part is a children's book explaining covid-19. (Special to the Democrat-Gazette/Jen Holman)

After covid-19 shuttered schools around the world, three mothers — two in Little Rock and one in Europe — found themselves in need of a book.

"We're stuck at home all the time, the kids are upset," Jen Holman says. The children wanted their friends, missed their art and dance classes and weren't keen about all the handwashing. More than anything, they felt powerless and scared and were plaguing their parents with questions.

What was the point of staying home when they weren't sick?

"That was the hardest part to explain to our kids, that it's not just for us," Holman says. "It's for people that we don't know and can't see."

A novelist, Holman had made friends with Cary Smith, an artist, and Kristina Bondurant, who is a microbiologist and epidemiologist, while their kids attended Jefferson Elementary School in Little Rock. Smith moved to Germany in 2019, but they stayed in touch. When social distancing began in early March, at first, they texted back and forth, even more, to commiserate.

Then they leaned into their friendship.

"You get stir crazy and you're used to being a professional, all of the sudden you're a full-time mommy. It's a difficult transition," Holman says. But then they noticed that their shared problems came back over and over again to how to tell a story.

They wanted one to explain covid-19 in a way that was factual but not terrifying and that could comfort and inspire 'tweens as well as little kids. Holman's kids are age 6, 8 and 12; Smith's two are 11 and 9; and Bondurant has an 11-year-old and a 14-year-old.

Someone really needed to write that book. "And we realized we had the professional skills to do that," Holman says.

Smith would handle the illustrations. "She's made book covers for some of my books," says Holman, who has five novels, including the young adult series Descended of Dragons. Bondurant would explain the science in child-friendly terms — which was right up her alley as a working scientist and a visiting STEM teacher for the public school.

They tossed Holman's first idea, involving a panda, as too babyish. They settled instead on a girl who, like their children, asks Mom for answers. The mother — a scientist — could explain how Mira's small, personal behaviors were a crucial part of an epic human struggle against an invisible threat, the new coronavirus. Washing hands was a heroic deed.

This literary collaboration had to span the Atlantic because Smith's husband, Lt. Col. Marty Smith, transferred in 2019 from Little Rock Air Force Base, where he commanded the 29th Weapons Squadron, to Ramstein Air Base in Germany, where he's deputy group commander of the 86th Operations Group for the 86th Airlift Wing.

To accommodate the seven-hour time difference, they texted through Facebook Messenger about the book from early morning to about noon CDT. (At lunchtime for Holman and Bondurant, Smith was feeding her family and putting them to bed.)

They didn't actually see one another until their first on-Zoom interview in mid-April to promote their finished product, Mira Does Her Part: How One Girl Vanquished a Virus With Healthy Habits.

"We were all waving at each other," Bondurant says.

The name Mira (pronounced Meera) came to Holman and she doesn't know why. "It's Spanish for 'to look' or 'to see.' It just seemed to fit."

Mira imagines the virus as a dragon, and that was "all Cary," Bondurant says.

Smith's son Gus is in first grade. "He was looking at his graphic novels, which are all dragons right now," Holman explains.

"Cary said, 'Write the story.' And then she had a storyboard, with little squares," Holman says. "Into each square, I wrote parts of the story. She came behind and illustrated that text."

"The illustrations are a blend of traditional watercolor mixed with digitization," Smith says. "I traditionally work in watercolor these days, mostly doing portraiture."

Smith dripped watercolors on paper to create vivid virus cells. Her images range from closeups of mother and child to full-bleed panoramas in which the child sees herself and her mother reflected among the reflections of many other people.

On one page, Mira and her mother sit with their heads close together and behind them the shadows of their hair combine to create a lion. Holman's 8-year-old likes that lion. He's artistic and musical, and so the "dreamy dragon" illustrations appeal to him.

Her 12-year-old daughter likes the back of the book, which includes a timeline of history, facts and a scientific glossary. Holman's 6-year-old liked that the book isn't "a princess book for girls."

Bondurant read the book to Jefferson Elementary students during her STEM enrichment classes (over Zoom). Before the pandemic, she visited classrooms for kindergartners through fifth grade. "A lot of what I do usually is hands-on activities. Once we closed in-person instruction those weren't as available."

Mira Does Her Part became a conversation starter in the Zoom version of her program. "They noticed the lion very quickly," she says. "That was a big one. Some of them were able to put into words why you would see the lion at that point in the book.

Bondurant thinks the book's message will be even more helpful as restrictions ease.

"One of the things that Mira shows us in the story is she listens to a trusted expert in her life. She is asking questions and starts to understand what she needs to be able to do. It's important to continue to follow Mira's example because social distancing, handwashing and staying home when you are sick are more important now as we start to move around more as businesses are opening than they were when we just stayed home," she says. "We hope that Mira can give examples to children and adults for what we need to be doing to stay safe for ourselves and our families but also all those vulnerable populations that we're about to be interacting with as they have to get out and about too."

She has also created a study guide with questions to ask after children know the story. For instance, "Mira had a lot of imagination in her story. The guide has children imagine what the virus looks like for them. Mira imagined a dragon, what would they imagine it to look like?"

The guide is for parents as well as teachers and is a free download at teacherspayteachers.com (see arkansasonline.com/61mira).

Mira Does Her Part: How One Girl Vanquished a Virus With Healthy Habits is available in hardcover ($14.99) and paperback ($9.99) online at Barnes & Noble Booksellers, as a paperback ($9.49) and ebook ($5.95) on Amazon, and at WordsWorth Books & Co. in Little Rock. Bookstores and libraries can order it through Ingram Spark.