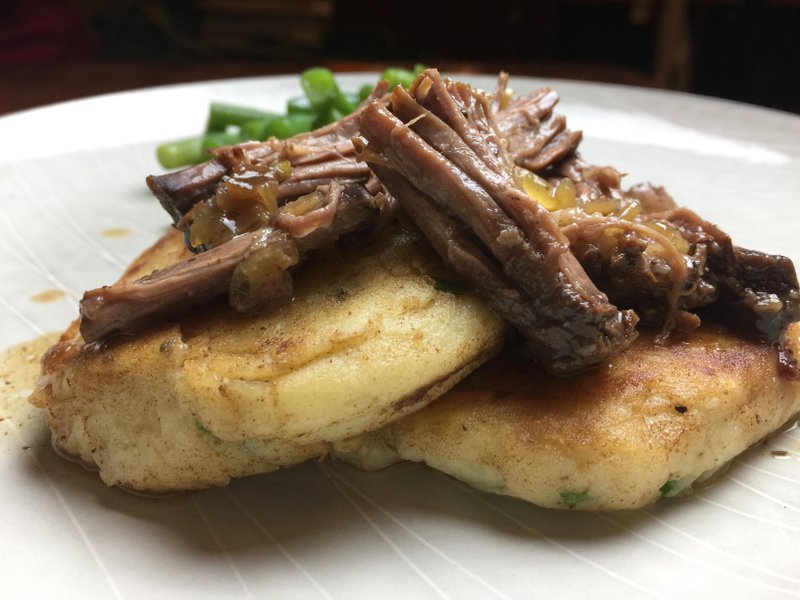 I love potato pancakes. Especially the kind made with leftover mashed potatoes.

Unfortunately, I rarely have any leftover mashed potatoes. It seems no matter how much extra I make we somehow eat them all.

So I've been making them fresh. It takes a little longer, but it's not like I have anywhere to be these days.

They're easily made with instant potato flakes, but I think they taste better if you make them from scratch. Either way, the idea is to have about 2 cups mashed potato.

I like to make them whenever we have leftover pot roast, especially when there's not quite enough roast to make a meal. I will shred the meat and toss it with its gravy and spoon the mixture over the pancakes. (But they're also good served the typical German way with applesauce and/or sour cream.)

My mouth waters just thinking about it.

My favorite roast is one I've written about several times before: place a 2- to 4-pound chuck roast in the bottom of a slow cooker, sprinkle in some powdered ranch dressing mix (½ envelope for a small roast or a whole envelope for a large one), some au jus gravy mix (Lipton Onion Soup Mix is also good), add as many or as few pepperoncini peppers as you like (I usually add about a quarter to half a jar) and a knob or two of butter. Cook on low for 8 hours or on high for 4 hours. That's it. It's rather high in sodium, but also in flavor. So much flavor. Sometimes I add a package of baby carrots. Sometimes I cook the carrots separately in a saucepan immediately before serving the roast, using a ladle or two of the roast jus as seasoning in the cooking liquid for the carrots.

1 to 1 ½ pounds Yukon gold or small russet potatoes (if using large potatoes, cut them into quarters)

1 ounce finely grated parmesan or Romano cheese (I use a Microplane), optional

½ cup all-purpose flour, plus more as needed, divided use

Butter or vegetable oil, for frying

In a saucepan, combine the potatoes with enough cold water to cover by 1 inch. Add a generous pinch or three of salt. Bring to a boil, reduce heat and simmer until the potatoes are tender, 20 to 30 minutes for whole potatoes. Drain. If necessary, cut potatoes in half or quarters, and pass through a food mill or ricer into a large bowl. No need to peel because the ricer will catch the skins. Let the potatoes cool to room temperature.

Once the potatoes have cooled, stir in the chives, cheese and black pepper. Taste the mixture and season with salt and more pepper or even a pat of butter or tiny splash of cream, if needed, and then add the egg and 4 tablespoons of the flour. Mix well.

Place the remaining flour on plate or in a shallow bowl. Line a large plate or baking sheet with parchment or wax paper.

Divide the potato mixture into 8 portions. The mixture will be very soft. If it is too sticky to shape, stir in a tablespoon more flour. Working with one portion at a time, shape each portion into a patty about 3-inches in diameter, then dredge the patty in the flour on both sides. Place shaped patties on the lined plate or baking sheet. Cover and refrigerate 30 minutes.

In a large skillet, heat about 1 tablespoon of butter over medium heat. Tilt pan to coat evenly with the melted butter. Add as many potato pancakes as will fit without touching (my favorite skillet holds 4 comfortably). Cook about 3 minutes, or until golden and then flip and cook on second side until browned. Add more butter and repeat with the remaining pancakes. Serve immediately with desired toppings.