Coaches welcome the return of players 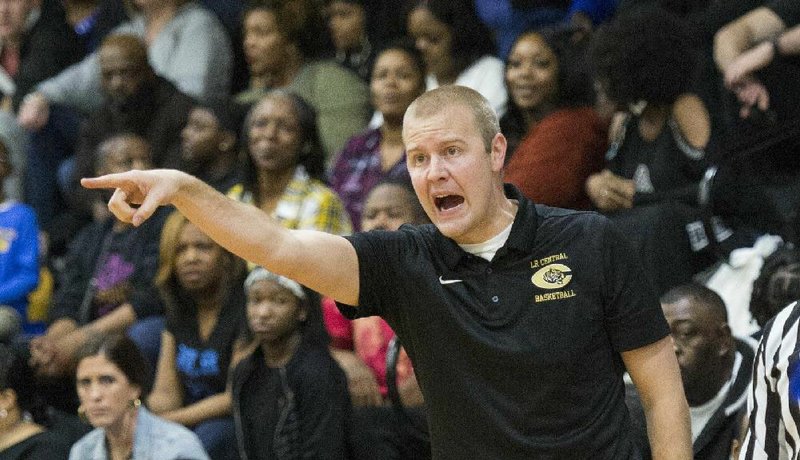 It's been almost three months since Little Rock Central boys basketball Coach Brian Ross has seen his players in a team-like setting, but he noticed a change in several of them when he held workouts Monday.

"Man, the biggest thing is when you go that long without seeing high school kids at all, you realize that some of them have grown," said Ross, who hadn't been around his team since the coronavirus pandemic forced the Arkansas Activities Association to suspend sports one day prior to Central's appearance in the Class 6A state title game in March. "We measured them all on the day we came back, and I was like, 'Oh dang.'

Coaches around the state have a lot to be thrilled about these days.

Winter was still in effect the last time Ross and his coaching colleagues got a chance to stage any kind of practice with their players. This week marked the first time they were able to extensively interact with one another in person.

"To finally get going again was great," Osceola boys Coach Vernon Wilson said. "We got started Monday and had a lot of guys show up. We've all just been hoping for the best so it was a good feeling to see the kids and get things started again."

Ross and Wilson each led their respective teams to state titles this past season, albeit under extraordinary circumstances. On April 6, the AAA decided to cancel the final eight championship contests that were slated to take place on March 13-14. All 16 of those teams were awarded co-champion status.

For both Central and Osceola, winning a title put an end to the two longest championship droughts of any of the boys teams that were scheduled to play over those final two days.

The Tigers are entering the offseason as state champions for the first time since 1999. Central is also expected to return several key pieces next season, including Camper, an all-state selection, as well as Kiyler Hudson and Cody Robinson, both of whom were named to the all-state tournament team during the Tigers' run.

Ross said he's been happy with what he's seen out of his players thus far.

"Things have been great," he said. "It was good just to have them in the gym, and they were all pretty eager to get back. The energy has been good, too. I know a few of the guys have kind of been getting some individual workouts with other trainers and whatnot.

"But I think even for them, it was a bit of shock to their systems because it was just harder for them to get into a team workout. We're only going an hour, really the workout part was probably about 45 minutes. So just moving that hard, for that long, without resting. ... it's getting them back into shape quick I hope."

The third-year coach, who is 34-23 over his first two seasons at Central, mentioned that the guidelines that were put into place by Gov. Asa Hutchinson and the Department of Health haven't been much of an issue so far, especially since the players know what's at stake.

"They've taken to the instructions really well and have done what we've asked of them," he said. "We haven't had any problems, which is good. We just kind of warned them and told them, 'Hey, if you don't do this right, then we're not going to be allowed to practice anymore.'

"I think they all like practicing so they're doing things the right way."

Valley Springs girls Coach Ryan Johnson made sure his Lady Tigers did what they needed on their first day back.

"When you're in the coaching profession, you've got to make adjustments," he said. "Things have been good, but it's had its challenges and has been what you'd kind of expect. You had the ones that you knew would still be working hard during the time off and then, you got your ones that may have taken a super extended spring break and hadn't done a whole lot.

"But we're making it work, and we're gonna still find a way to get better every day."

Johnson led the Lady Tigers to a 36-7 record and a share of the Class 3A title in his first year as coach. Valley Springs won its final 11 games without a single senior in the starting lineup.

But after the prolonged time away, Johnson understands that preparation is more vital than ever because of the late start, but things could be a lot worse.

"It was just nice to be back around the kids, be back in the gym to get just a little bit of work in," Johnson said. "Even if there are social distancing guidelines, it's been good for us. They're a good group, they work really hard, and they came back ready to go."

"I could really tell that they'd missed each other," she said, referring to her team reuniting at the start of the week. "I know some of them have seen each other, but just to finally be back and somewhat have a routine was really nice. The camaraderie of it was the best part. The first day was quiet because we're normally a pretty loud group because we laugh, joke and have a good time while working hard.

"But I think once we got past all of the technical stuff regarding what we could and couldn't do, the next day felt pretty normal, and we were back to being who we were."

Conway fell a game short of its goal of reaching the state title game this past season, but Hutchcraft didn't have to say much for her team to understand just how important opportunities like these are.

"We're not in the best shape, but it's June, and it's a long time until November," she said. "The most important part was just coming together and having something that you're back working toward. It was good for all of us, me and our staff, to really just be able to focus and see our kids."

Hutchcraft said she, her coaches and her players are all wearing masks and enforcing the 6-foot rule.

"We've kept the groups really small actually, and everyone has been pretty comfortable with that," she said. "With all of our kids that came back from last year and our new kids, we've pretty much had 100% participation. They were all there [Monday] and were ready to go.

"So with fingers crossed, we can all stay healthy. With that, hopefully some guidelines will get better as we go along. But it's been exciting just the same."

Wilson is eager to see what's in store for his team after the program secured its first title since 2002. In Seminole Country, he's got to share the wealth.

"I've got some common sense about it," Wilson said with a laugh while discussing crossover between the football and basketball teams. "We kind of share athletes, and [football] season is coming up before mine. So I don't even bother those guys that play both right now. I just kind of let the football coach get his guys ready."

That arrangement yielded top-shelf results during the 2019-20 school year. Osceola's football team went 12-2 and reached the Class 3A championship game. The basketball team finished 19-7 and shared its title with longtime rival Rivercrest.

Wilson said things have gone nicely as players get re-acclimated to team drills and instruction, but there have been hiccups.

"Earlier I had to tell two kids who were talking to kind of get apart from each other," he said. "We've got to remember what's going on and try to do our best to keep abiding by those guidelines that are in place. The hardest thing, I think, is for the coaches, though.

"We've got to coach with the masks on. We holler quite a bit sometimes, and the kids can hardly hear you because of the mask. So we've got to holler louder. But it's going to be OK." 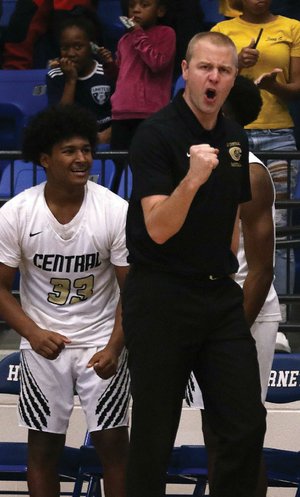 Little Rock Central boys basketball Coach Brian Ross is one of many coaches around the state who say they are happy to resume practices. (Arkansas Democrat-Gazette/Thomas Metthe)