REVIEW: 'Mighty Oak' is another kind of ghost story 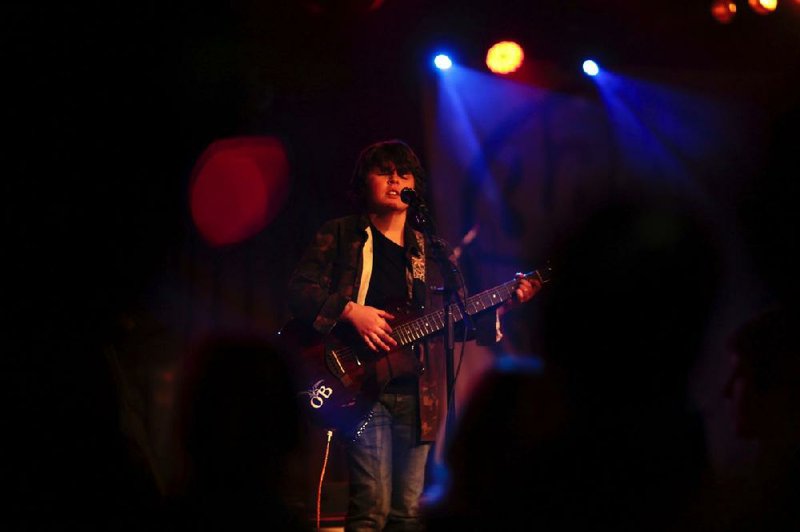 Oak Scoggins (Tommy Ragen) leads the re-constituted Army of Love in a scene from Mighty Oak, a dramedy that asks us to consider the possibility that the kid might be the reincarnation of a rocker who died young and on the cusp of achieving music industry success.

Who's going to release a summer movie when 94% of the nation's theaters remain closed?

Well, Paramount has just pushed an innocent little film called Mighty Oak into the spotlight. At least Paramount is distributing it -- there doesn't seem to be much in the way of promotion, and the press materials for the film aren't on the Paramount press site, but on the custom mightyoakthemovie.com, which gives it something of the flavor of an underfunded faith-based film.

This film is opening theatrically.

It feels as though Mighty Oak is being offered as a kind of sacrifice, a trial balloon designed to test American's hunger for theatrical product.

The circumstances present Mighty Oak with an opportunity and a challenge. It's the sort of film that could never compete in a normal summer movie environment; it would be overwhelmed by any Marvel Cinematic Universe B-story or fast and furious blow 'em up. So, without the competition, it has a chance to be seen, to be noticed, to find an audience -- maybe even to return some revenue to its investors.

On the other hand, some of us are still pretty wary of the covid-19. Is this mild (and sweet) little movie enough to draw anyone out? Or do we need something a little more niche-y -- maybe a gory horror show for the faithful? (We could whip one of those up in about 15 minutes if we need to.)

Hard to say. To be fair to the makers of Mighty Oak, they certainly didn't intend this film to be a test case. More likely, they saw it as a way to present the talents of 11-year-old Tommy Ragen to the wider world. Young Ragen is something of a pop music prodigy who has been playing guitar and singing at open mic nights since he was 6 years old.

When he was 9 he was cast in the first national touring production of the School of Rock stage musical. (Is it rude to mention here that Ragen is the great-grandson of Ray Kroc, the McDonald's tycoon?)

He's got all the youthful would-be pop star accouterments, including a YouTube Channel and an Instagram account, both of which I'm sure would welcome more followers. He has released three albums (to Spotify, at least) since 2017. He writes songs and sings them in a voice that's endearingly pre-adolescent.

That said, and this is no real knock on the kid, he's no Little Stevie Wonder. His music seems unlikely to hold much appeal for those of us outside of his prepubescent cohort. He has not come up with "Fingertips" yet, much less anything as indelibly crazy as "Fingertips, Part 2." Which means that he appeals to kids, which is OK, or even great. His songwriting is advanced for his age, and his interests, burgeoning abilities and creeping limitations certainly haven't coalesced into anything as delimiting as a style. Part of the appeal of watching him play and sing is that he seems so comfortable, so grown up and professional doing it.

But it's definitely a diversion along the lines of watching a dog play badminton. Huh. Would you look at that?

Ragen might be the reason the movie exists, but he's not exactly the star. That would be Janel Parrish, who some might recognize from the TV series Pretty Little Liars or the Netflix film To All the Boys I've Loved Before. She plays Gina Jackson, the manager of a SoCal pop band that includes her brother Vaughn (Levi Dylan, son of Jakob and grandson of Bob), a brilliant singer-songwriter who is on the cusp of blowing up when -- on the way to a gig opening for Arcade Fire -- he's killed in a car wreck.

A decade later, Gina runs into this 10-year-old kid named Oak Scroggins (Ragen) who seems eerily like her brother in temperament and talent. And he has even acquired Vaughn's old guitar (I believe it's a Taylor Tz5, although it could be the larger T5 model). Gina immediately sets out to get the band back together, with Oak as the new frontman.

Does she really believe that Oak is the reincarnation of her brother? The math works out. Others are a little more cynical.

In a very odd way, there's something about this wispy product that reminds a bit of David Lowery's 2017 masterpiece A Ghost Story, but director Sean McNamara seems to have no aspiration to hint at deeper themes than the readily apparent universal ones. People need people, and when we lose people we sometimes find ways to trick ourselves into believing they're not completely lost.

Matt Allen (Four Christmases, Soul Surfer) wrote the script for Mighty Oak, based partly on some of Ragen's songs, including "Chasing," which was for a time the working title of this film. I'd read something about him having an experience similar to Gina's. A little bit of digging produced a 2016 story in Screenwriter Magazine, in which Allen talked about working on the script for the forgettable Jennifer Garner vehicle Nine Lives, in which a philandering husband and father is killed in a car wreck and comes back as his family's house cat.

Allen recalled that he connected with the "stupid cat movie" because of "[a] couple weeks after my dad passed away, this stray cat showed up named Cleo. I swear, every time I talked about my dad, this cat would respond in a weird way."

Allen told the magazine he understood he was projecting his father's personality onto the cat but was intrigued enough to write the body-switch project, which he never believed would get made.

"We thought, they're never going to make this movie. We don't even know who this is for. It's a Woody Allen movie about a guy who gets turned into a cat."

But Hollywood made that movie, and that allowed Matt Allen to renew his Writers Guild of America health insurance policy. Good thing too, because a couple of weeks later he was diagnosed with a brain tumor the size of a golf ball. Mighty Oak was the first writing project he accepted after recovering.

Cast in the best light, Mighty Oak presents as a genuine family movie, with most of it being shot in real locations around La Jolla and Ocean Beach, Calif. It's sunny and wistful; something to go see if that's what you need right now. 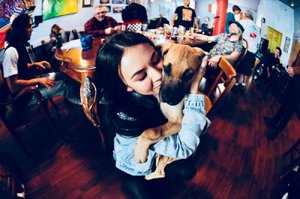 Gina Jackson (Janel Parrish) is the manager of the up-and-coming pop band Army of Love in Mighty Oak. (She also has a very good dog, played by Larry.) 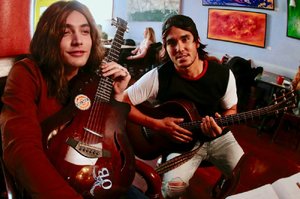 Vaughn Jackson (Levi Dylan, grandson of Bob) and Pedro (Carlos PenaVega) are in a band on the verge of stardom when tragedy strikes in Sean McNarama’s Mighty Oak.