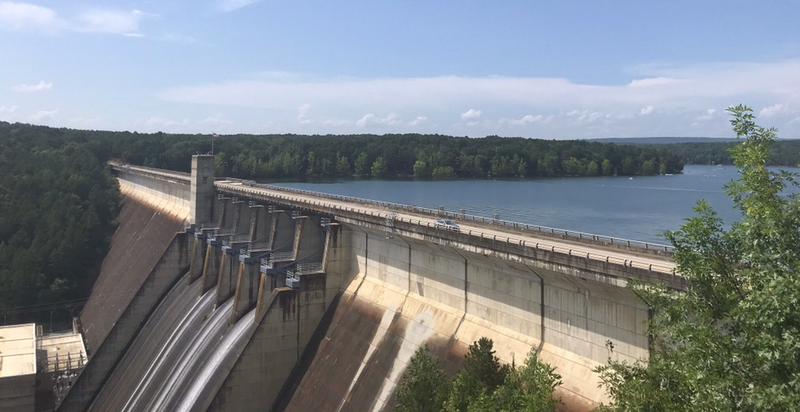 The Central Arkansas region has secured long-range water sources through 2050, thanks to an agreement recently reached with the U.S. Army Corps of Engineers for water storage allocation totaling 20.75 million gallons per day from Greers Ferry Lake.

The agreement is the third for water storage allocations from Greers Ferry Lake and Lake Ouachita that the Mid-Arkansas Water Alliance has struck with the Corps since formal planning began in 2002.

“ It ’s b e e n n e a rly a 20-year effort working with the Corps to access water in those two Corps lakes for long-range municipal water use in Central Arkansas,” said Jim McKenzie, the alliance board secretary.

A total of 65.7 million gallons per day has been allocated from water storage in the two lakes under the agreements, the first of which was reached 10 years ago.

The new agreement is part of an effort that began in 2002 to work with the Corps’ Little Rock and Vicksburg districts to “help identify our long-term water needs, and the most affordable and sustainable sources to meet those needs,” Bill Burrough, the Hot Springs city manager and alliance president, said in a news release.

Each of the systems receives a prearranged amount of the total allocation reached in a separate agreement, McKenzie said.

Conway Corp. will receive the largest suballocation, of nearly 4.3 million gallons per day.

Central Arkansas Water — the largest water utility in Arkansas, with 430,000 customers — is to receive 1.2 million gallons per day.

“Sprinkler usage is the biggest driver during the warm months,” he said in an email. “Our biggest day ever was around 126 MGD.”

But Central Arkansas Water is “best positioned” among the region’s water utilities to meet is future needs, according to McKenzie, a member of the agency’s board and the former longtime director of Metroplan, the long-range transportation planning agency that jump-started discussions on regional water issues, leading to the creation of the alliance.

It has two reservoirs in Lake Winona and Lake Maumelle, as well as a water storage allocation totaling 100 million gallons per day from DeGray Lake.

Central Arkansas Water and other water utilities plan for “consistent safe yields” during times of record drought. The utility also must plan for the possibility that Lake Maumelle has to be removed as a reservoir.

A 13-mile segment of a crude oil pipeline that was formerly known as the Pegasus Pipeline runs through the Lake Maumelle watershed, which is the largest drinking water reservoir in Arkansas. The pipeline ruptured in 2013, spilling 5,000 barrels of crude into a neighborhood in Mayflower and resulting in $57.5 million in property damage.

The pipeline has been closed since the rupture. Its owner, Energy Transfer Partners, which acquired majority ownership from Exxon in 2016 as part of a joint venture with the oil company, told Central Arkansas Water officials in January that testing and inspection of the pipeline is taking place.

Central Arkansas Water and other utilities have to plan for “low-probability but high-risk” events, McKenzie said.

The agreements were pursued after a 2003 study showed that the region would need an additional 54 million gallons of water per day by 2050. At the time, members of the alliance formed in 2002 were collectively using nearly 100 million gallons daily.

By 2050, the population of the region is expected to reach nearly 1 million, according to estimates.

Not all the water is available in Corps’ lakes, which number 600 nationally. Typically, the lakes are divided into an inactive pool, a conservation pool and a flood control pool.

When planning began, both Lake Ouachita and Greers Ferry Lake had 5% of their water storage capacity available for discretionary uses, which is the capacity the alliance sought.

It is unclear whether the region would be able to tap either lake as a source in the future.

The Corps is undertaking a study of the entire White River basin, which includes Greers Ferry Lake, after flooding in the basin in 2018. Any future requests would have to be filtered through the study recommendations, McKenzie said.