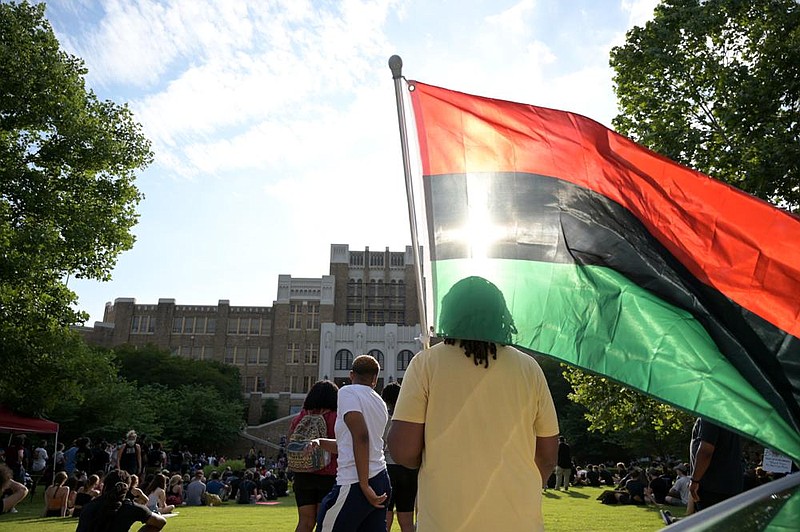 Hundreds of demonstrators in Little Rock on Sunday mourned victims of police violence and discussed future action on the ninth-straight day of protests in the city after George Floyd's death at the hands of Minneapolis police.

In the late afternoon, demonstrators participated in a town hall-style rally in 90-degree heat near the steps of the state Capitol, and they later traveled to Central High School. The first three nights of protests in Little Rock, beginning on May 30, ended with police using tear gas on demonstrators, but the rallies on Sunday were peaceful.

A small group of officers stood in front of the Capitol building, but otherwise few uniformed members of law enforcement agencies were visible as speakers took the microphone. Overhead, a drone buzzed occasionally.

Organizer Donte Jones, 31, told the crowd that he put the town hall-style event together because he had attended a protest the day before where "it didn't seem like we were united." Sunday's session was to inform, he said, explaining that there were things they needed to do after.

"Protesting is just a tool. It is not the toolbox," Jones said.

The first speaker after Jones' mother, who led the crowd in prayer, was Arkansas Rep. Jim Sorvillo, R-Little Rock. Describing the Little Rock community as "an extended family," Sorvillo told the crowd, "When one or more members are hurting, then we are all hurting."

Although Sorvillo posed a series of questions to attendees -- such as what they would like to see immediately to address police brutality and social injustice and what he could do in his capacity as a state legislator to support this mission -- the crowd had questions for him.

When a demonstrator asked about plans for reallocating funds from the police to education or health care, Sorvillo said Americans could choose to spend millions of dollars on rebuilding cities after the unrest over Floyd's death, or they could invest that money in the community and police training.

A back-and-forth between the lawmaker and demonstrators quickly followed his remark. Someone in the crowd yelled, "Where are you getting the money from?" And shouts of "defund the police" came shortly thereafter. Organizers urged demonstrators to ask questions one at a time and to be respectful.

Sorvillo responded by saying that if that is what demonstrators want, then they have to express their view to city officials who fund police departments.

Taking the microphone after Sorvillo was activist and educator Leron McAdoo, who reminded the crowd that Floyd was not the first to die from police violence, but that "we kept hitting snooze."

"Hopefully you all are awake now," McAdoo said. He told demonstrators not to confuse "activity with accomplishment," telling them, "Those are two separate things."

Creating change also requires coalition-building, late nights and backroom work, in addition to the visuals of a rally, according to McAdoo. He asked those in the crowd to think about what their demands are. McAdoo suggested they examine the platform of an organization, The Movement for Black Lives, which advocates for reparations and the abolition of capital punishment, among other demands.

Roderick Talley, who is running as an independent candidate for a seat in House District 34, pointed out that many people do not know who represents them in the Legislature. Talley noted that Sorvillo is 71 years old, contrasting the lawmaker's age with the people he saw in the audience.

"I need people like you to make sure you go out and register to vote, or run for office instead of complaining to people that don't have to hear your voice," Talley told the demonstrators.

Lauren Crosthwait, 28, carried a hand-painted portrait of a smiling Breonna Taylor, a Louisville woman who was killed by police.

Crosthwait said she made the portrait to remind people that people like Taylor were more than their last moments.

She also had painted portraits of Floyd and Bradley Blackshire, who was fatally shot by Little Rock police in 2019, adding that the paintings are "their voices, not mine."

A recharging station on the Capitol lawn was the brainchild of Londynn Wilkins, 6, said her mother, Sierra Welch.

Londynn's lemonade business sponsored the station, where they handed out Gatorade and fruit, helped people charge their phones and provided other services, Welch said. The idea was to help others "be able to endure the heat, and still support the movement."

Marcus Johnson, 31, said he hadn't attended previous protests because he has asthma. He was fearful of tear gas and pepper spray after reports of an Ohio protester's death that was thought to be linked to the gases.

But it was important to him to come out, he said, because of the recurring violence against black Americans, especially those disclosed this spring as people have been stuck at home.

He gave the example of Ahmaud Arbery, a Georgia man shot by neighbors while jogging.

Following the afternoon event at the Capitol, demonstrators converged for a rally at Little Rock Central High School, one of the most significant civil-rights sites in the U.S.

The school gained national attention in 1957, when nine black students were denied admittance to the school by Arkansas' governor as part of an effort to keep the school segregated.

But on Sunday, hundreds of demonstrators -- including many black children -- thronged the lawn of the historic building to listen to speakers advocating for racial equality. Some sat on benches engraved with the names of students involved in the 1957 crisis, who are known as the Little Rock Nine.

Addressing the crowd, speaker Edmond Davis called on listeners to stand up against police violence and systemic racism through many channels, including voting and continuing demonstrations at an event in Washington, D.C., later this summer.

"This is a global effort. Don't let it stop here," he said.

Lee Miller, a Little Rock criminal defense and family law attorney, encouraged people to fight for change in the way police officers are prosecuted and for black communities to push for change through economic, political and community channels.

He also announced a formal campaign, to launch later this month, challenging area residents to dine only in black-owned restaurants.

"This is not a boycott. We're just spending time, and money, with our people," he said.

In an echo of daily pandemic media briefings at the state Capitol, a sign-language interpreter stood by to translate speakers' remarks, which also included calls for specific police changes. Those included instituting a residency requirement so police work in their own communities, having more widespread body camera usage and defunding police departments.

Ryan Matthews, a Central High alumnus and one of the organizers of the event, said in a brief interview that the event made him feel nostalgic -- he'd also grown up just across the street. While not previously an activist, he plans to continue working with organizers and community leaders with the newly formed #LittleRock9Thousand group.

While recent demonstrations started with police brutality, there's much more to address going forward, he said.

"What those nine students started in the '50s, this is just the manifestation of that," he said.