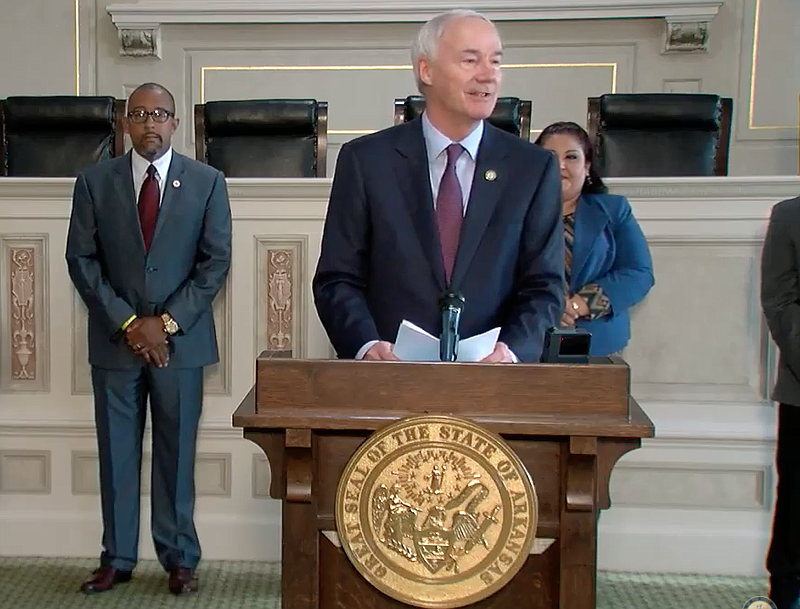 Arkansas Gov. Asa Hutchinson speaks to reporters in Little Rock on Tuesday in this still taken from video provided by the governor's office.

Gov. Asa Hutchinson on Tuesday announced the formation of a task force that will review Arkansas' standards for police training and operations, community policing and the disciplinary process for officers who violate protocol.

The new task force was created in the wake of nationwide protests against police brutality and misconduct that have persisted for two weeks following the death of George Floyd at the hands of a Minneapolis police officer.

The governor appointed two leaders of local protests in the state -- Tim Campbell of Little Rock and Jimmy Warren of Conway -- to serve on the task force.

While the governor said he expected the task force to examine actions that can be undertaken by both his office and the Legislature, he dismissed calls to "defund" the police that have been made by some protesters and proliferated on social media.

The governor said the task force will turn over its report at the end of the year, after which it will likely be disbanded.

Gov. Asa Hutchinson will speak about the creation of a task force focused on law enforcement in Arkansas at 11 a.m. Check back to watch the live video.

[Video not showing up above? Click here to view » https://www.youtube.com/watch?v=nNppa2ETsw0]