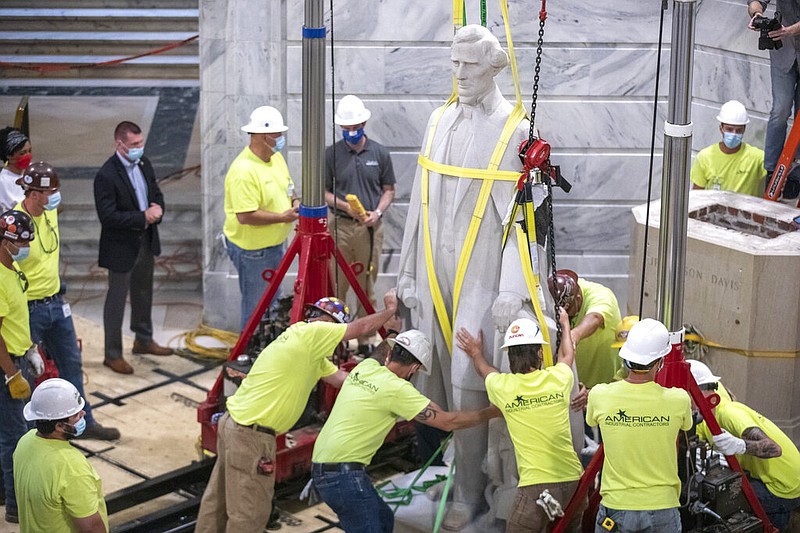 Workers prepare to remove the Jefferson Davis statue from the Kentucky state Capitol in Frankfort, Ky., on Saturday, June 13, 2020. A Kentucky commission voted to take down the statue of the Confederate president, supporting a push from the governor.

FRANKFORT, Ky. — Having led the push to take down a statue of Jefferson Davis from the Kentucky Capitol, the state’s governor had a ceremonial role Saturday in its removal from the place it stood for decades.

Gov. Andy Beshear pushed the button to a rig that lifted the 15-foot marble statue off its pedestal in the ornate Capitol Rotunda. The governor tweeted a photo showing the memorial to the Confederate president being hoisted for removal.

“Today I pressed the button to bring it down,” the Democratic governor said in his tweet. “Now, every child who walks into their Capitol feels welcome. Today we took a step forward for the betterment of every single Kentuckian.”

Joining Beshear for the historic event were two leading members of his administration — J. Michael Brown and La Tasha Buckner, who are black.

In a quintessentially Kentucky twist, workers discovered an empty bourbon bottle in the base after the statue was hoisted. Also found was a newspaper front page.

It was a sudden and dramatic departure for a statue that advocates wanted removed for years.

On Friday, the state Historic Properties Advisory Commission voted to move the statue to a state historic site in southern Kentucky where the Confederate leader was born. Beshear requested the meeting and said he expected the panel’s support to remove the statute. The commission is responsible for statues in the state Capitol.

The panel’s vote came two days after another Davis statue was toppled by protesters in Virginia.

Calls to remove Confederate monuments, seen as symbols of slavery, have escalated amid widespread protests against police brutality toward African Americans. The protests were sparked by the death of George Floyd, a black man who died after a white Minneapolis police officer pinned him down by putting his knee on Floyd’s neck.

In Louisville, protesters have demanded justice for Breonna Taylor, who was killed in her home in March. The African American EMT was shot eight times by narcotics detectives who knocked down her door while attempting to enforce a search warrant. No drugs were found.

The Davis statue stood in the Kentucky statehouse since 1936. It occupied a corner of the Rotunda near a bronze likeness of Abraham Lincoln, his Civil War adversary and the president who freed the slaves with the Emancipation Proclamation. Both were Kentucky natives.

The commission called for the statue to be moved to the Jefferson Davis Historic Site, where Davis was born. The site features a 351-foot monument and a museum, according to a state website.