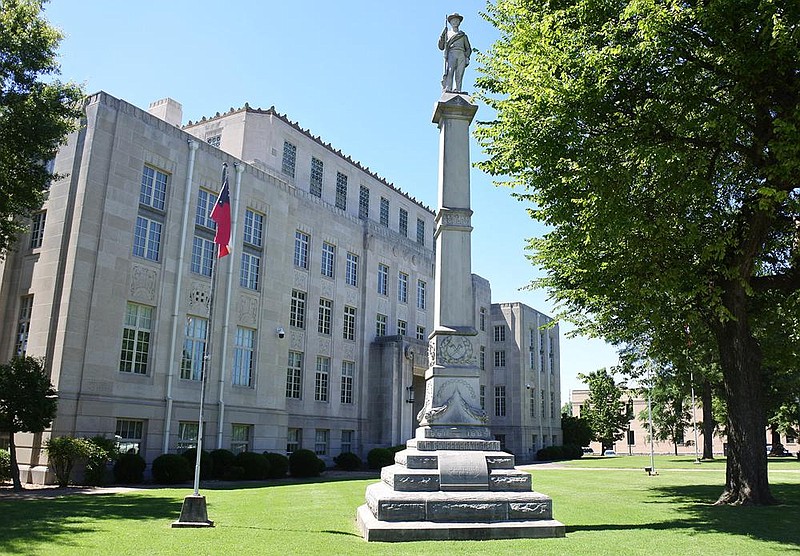 FORT SMITH -- There is an ongoing movement to have a long-standing Confederate monument in Arkansas' second-largest city moved from the Sebastian County Courthouse grounds.

Danielle Hoopes, 33, a software engineer living in Fort Smith, started an online petition June 5 calling for the removal of the Fort Smith Confederate Monument from the front of the courthouse.

Hoopes said on Thursday that the short-term goal is for the petition to obtain 5,000 signatures. She and the other people involved in this movement are currently looking into where to send the petition after this goal is met. It garnered over 2,600 signatures as of Friday evening.

The Fort Smith Confederate Monument consists of a 6-foot marble statue of a Confederate infantryman on top of a granite shaft. It was erected in 1903 by the Varina Jefferson Davis Chapter of the United Daughters of the Confederacy, which raised $2,332.39 for the project, according to the Encyclopedia of Arkansas. This was done to commemorate local men who served in the Confederate army during the Civil War, as well as to honor the Confederates buried in the Fort Smith National Cemetery.

The Fort Smith City Council voted to allow the monument to be placed on the grounds of the Sebastian County Courthouse earlier that year.

Hoopes said that her movement wants to be respectful of everyone's stake in the history of the monument and the city. It is considering multiple locations to have the monument moved so that it can still be visible from a historic standpoint, desiring to find a solution that respects everyone.

"We aren't, in no way, trying to destroy anyone's heritage or history," Hoopes said. "We just want to kind of build on the momentum that the city of Fort Smith has already seen. We want to be able to attract new employers to the area, and really emphasize all the good work that we've done to make Fort Smith more enjoyable for every generation, and we really want to see this become a catalyst for that."

Hoopes said she believes it is important that people confront the history and the narrative around the time when the monument was placed, as well as to realize what it stood for then and what it means now while respecting everyone's history. She said the monument is not of a real person, but represents a certain belief system.

"We want it to be remembered, we want it to be explained, but we also don't think that placing it at the Sebastian County Courthouse there on the lawn, it's just a really prominent space," Hoopes said. "That's an honorable place for something like that to be. So we want to be sure that we represent everyone in Fort Smith, and ... that we put it in a place of historical significance so it can be seen for what it is, which is, in fact, history, but we also don't want to honor what it stood for at the time."

To Hoopes, this is an opportunity for people to expand on what they think they know and "drill down" into things that were happening during that period, including Jim Crow and segregation. The first sentence of Hoopes' petition reads, "Diversity is Prosperity."

"We can choose this moment to remove this divisive structure and send the message that we do not in any way, support racial and societal divides," the petition states.

IN DEFENSE OF MONUMENT

Fort Smith Attorney Joey McCutchen, who represents the Varina Jefferson Davis Chapter of the United Daughters of the Confederacy, said in an email that monuments that are memorials to the dead should be left alone. To the United Daughters of the Confederacy, relocating this monument is the equivalent of relocating a headstone due to it being placed in memory of lives given by Sebastian County Confederate veterans.

"We, as a society and nation, can use the Sebastian County Monument, the Lincoln Memorial, the Washington Monument, the Jefferson Memorial, the Robert E. Lee Monument etc. as educational and historical moments as to the good and bad of these men and our country," McCutchen said. "We must learn from our history -- good and bad. We cannot simply erase history, remove monuments. If we do so, we are likely to repeat mistakes of the past."

In McCutchen's opinion, and that of the United Daughters of the Confederacy, the monument does not carry any message of racial prejudice. According to him, Southern women erected monuments, such as the Fort Smith Confederate Monument, in an attempt to rebuild communities and "rekindle hope and grieve for their loved ones."

"Monuments can be equated to a headstone when they are in memory and honor of the dead," McCutchen said. "Many Confederate monuments were to remember the dead. The Confederate monument on the Sebastian County Courthouse is just that -- a reminder that too many people died. Learn from the past and do not repeat it. It was meant to be a reminder that the war was a terrible time and enormous loss of life. That loss was felt by all in the community."

When asked if there is a place where the monument could be moved to which the United Daughters of the Confederacy would be amenable, McCutchen replied that no answer can be given due to nothing being proposed to the organization. The Varina Jefferson Davis Chapter owns the monument in accordance with the ordinance passed by the Fort Smith City Council in 1903 granting the group permission to erect it, as well as other documents.

There are also other petitions circulating that call to keep the Fort Smith Confederate Monument at the Sebastian County Courthouse. One such petition was created by the Van Buren-based nonprofit Sons of the Southern Cross on Tuesday, which had over 1,000 signatures as of Friday evening.

Shondra Hickerson, heritage defense officer for the Sons of the Southern Cross, said via Facebook Messenger that the organization was founded more than 15 years ago by a group consisting mostly of veterans with Confederate ancestry that works to preserve its heritage through various means. Its petition, which was created in response to "the sudden demand" for the monument's removal, is intended to be sent to Sebastian County Judge David Hudson and Gov. Asa Hutchinson with as many signatures as possible.

"It is to our understanding that the UDC owns not only the monument, but the grounds it sets on at this time, and removing it without their permission would be unlawful," Hickerson said. "Not only that, but it has set at its current location for 117 years with no issue until now."

In regards to the ongoing controversy surrounding the monument, Fort Smith Mayor George McGill commented via email that he is happy with the residents of Fort Smith "learning about and exercising their rights under the constitution."

"This is a part of civil discourse, a lost art that should be practiced regularly," McGill said. "We are watching democracy at work, citizens are finding meaningful and effective ways to participate in the decision-making processes and the actions that affect them in their city."

McCutchen said the United Daughters of the Confederacy is the decision-maker with regard to any potential relocation of the monument. Neither the city of Fort Smith nor Sebastian County can legally move it.

The Arkansas Division United Daughters of the Confederacy agreed to move a Confederate monument and statue that it owns from the Bentonville square after discussion with community leaders, according to a release from the group June 1. The organization agreed to work with the Benton County Historical Society and other community members, deciding to move the monument to a permanent private park named "James H. Berry Park," near Bentonville Cemetery. The removal will begin in August.

Hudson, the county judge of Sebastian County, said on Friday that what happened in Bentonville with the monument there represents "a good model," a template for how these two points of view can utilize dialogue to come up with a solution that is suitable for everyone in a civil fashion. The county is in open dialogue with McCutchen to see if there is possible common ground that can be arrived at on the issue that is acceptable to both parties.

It is the county's responsibility to provide upkeep for the courthouse, Hudson said, including the monument.

Information for this article was contributed by Reporter Tracy Neal of the Northwest Arkansas Democrat-Gazette.