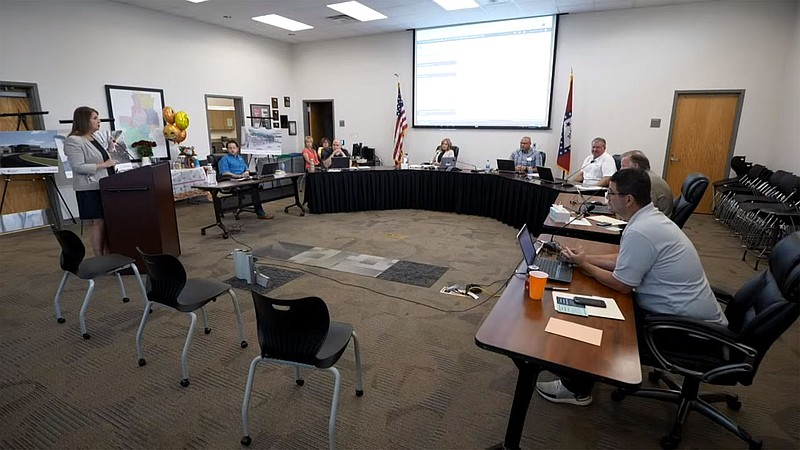 BENTONVILLE -- The School District's graduates will receive their diplomas during "family walk-through" events at their respective high schools next month.

The School Board made that decision by a 4-3 vote Tuesday after discussing graduation options for more than an hour.

Bentonville and West high school graduates will arrive at designated times on the day of their school's ceremony -- July 16 for West High and July 17 for Bentonville High.

Graduates will take turns walking through their school's stadium and getting up on a stage to pick up their diploma. They may be accompanied by up to 10 guests, who will get to witness the occasion from within 20 yards, said Jennifer Morrow, director of secondary education.

Both events will take about 12 hours to usher all the graduates through, and there will be about 10 families on site at any given time, Morrow said.

The events will be recorded and compiled into videos.

Committees at both high schools developed alternative graduation plans after ceremonies originally scheduled for May were canceled because of the covid-19 pandemic.

The board's choice essentially came down to either the walk-through event or a traditional, outdoors ceremony where each graduate would be allowed up to four guests.

Either option would be permitted under state and health department guidelines, said Superintendent Debbie Jones.

The district surveyed seniors on their preference. About half the class responded. Of those who responded, 70% said they preferred the traditional ceremony; 30% wanted the walk-through event, Morrow said.

However, the overwhelming majority of committee members who worked on graduation plans recommended the walk-through option, she said.

"Their concern is about safety and health," Morrow said.

Joe Quinn, a board member, agreed there is reason for concern.

"We can't sit here and pretend we're not in the hot spot of covid," he said.

Quinn, who eventually voted for the walk-through option, called the proposal an "elaborate photo opp."

But fellow board member Kelly Carlson challenged that notion, noting at least it will allow family members to be with graduates.

"We're trying to create the best memory we can," Carlson said.

Brent Leas, a board member, said he -- and many of the constituents he's heard from -- wanted a ceremony as close to traditional as possible. The walk-through event "sounds like a logistical nightmare," he said.

Eric White, board president, acknowledged it was a tough decision between the two options. While it might not be difficult to do social distancing while spectators are in their seats, it would be more problematic when people are entering and exiting the stadium, he said.

"The medical community is very strong on social distancing and masks being the best way to combat" covid-19, White said.

He added there's no way the board will make everybody happy with its decision.

Bentonville High has 727 graduates and West High has 497 graduates this year, a total of 1,224, according to the district.

Springdale, for example, did online ceremonies for each of its four high schools last month. The district is still considering the possibility of holding in-person ceremonies July 9-11, according to Rick Schaeffer, district spokesman.

The Rogers School District announced Tuesday it is canceling traditional graduation ceremonies it had planned to hold next month.

"Unfortunately, the number of active COVID-19 cases continue to increase in Northwest Arkansas, and due to the safety of our community members, Rogers Public Schools has decided to create an online ceremony for our graduates," wrote Rogers Superintendent Marlin Berry in a letter to parents.

Those on the Bentonville School Board who voted for and against a motion to hold “family walk-through” events as graduation ceremonies next month: