Proposal to ban hog farms near Buffalo River tossed out 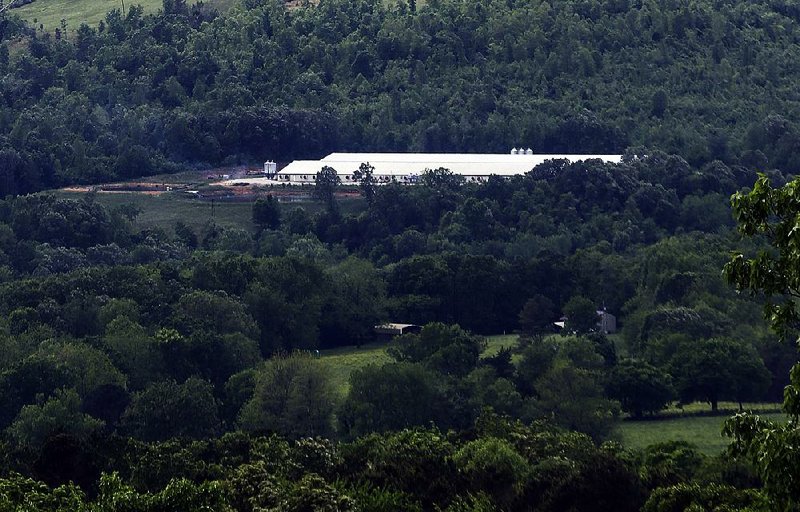 This file photo shows C&H Hog Farms, which sat 6 miles from the Buffalo River along Big Creek, a tributary of the Buffalo. C&H Hog Farms ultimately closed in January in a buyout deal with the state.

In a voice vote with no discussion and a few lawmakers audibly dissenting, the council accepted the recommendation of its Administration Rules Subcommittee not to approve revisions to Rules Five and Six proposed by the state Division of Environmental Quality.

C&H Hog Farms closed in January after the state, under Republican Gov. Asa Hutchinson, negotiated a multimillion-dollar buyout deal to get a conservation easement to limit the uses of the land where that large hog farm was.

In 2012, the hog farm obtained a permit under the administration of then-Gov. Mike Beebe, a Democrat, to house up to 6,503 hogs on Big Creek, a tributary of the Buffalo River. Conservationists, fearing underground contamination from hog waste, fought for years to close C&H Hog Farms.

The proposed moratorium has been backed by Hutchinson, who said he was directing Becky Keogh, secretary of the Department of Energy and Environment, and environmental regulators to make the moratorium permanent when he announced the buyout deal.

Hutchinson said Friday in a written statement, "The rules banning medium and large hog farms in the Buffalo River watershed have been adopted by the [Pollution Control and Ecology Commission], which is the commission charged by the General Assembly with the responsibility of adopting rules to protect both our farm land and our natural heritage.

"The Commission worked hard on this rule and heard from thousands of Arkansans before it unanimously passed the rules that are limited to the Buffalo River area."

"It is disappointing that the General Assembly failed to approve these rules. We are looking at what action to take next to assure that the Buffalo River is protected and healthy for the next generation," he said.

The second-term governor was asked by the Arkansas Democrat-Gazette why he thought the rules were rejected, if it shows the sway of the Farm Bureau and if it shows it will be harder for him to get proposals through the Legislature. His spokeswoman, Katie Beck, said, "That question can only be answered by the members" of the Arkansas Legislative Council.

Asked if the Legislative Council's decision reflects that the Arkansas Farm Bureau has more sway than conservationists with lawmakers, Sen. Terry Rice, R-Waldron, said in an interview, "I don't think Farm Bureau played the role that I think some did.

"I got an email or two and I answered one back. I butt heads with the Farm Bureau all the time and we just happened to be on the same wavelength on this one. ... I think there is close to a zero chance of there ever being a medium or large hog farm up there.

"There is a much larger chance that this would have a detrimental impact to other places across the state," Rice said. He also said that while he heard that Buffalo River interests "didn't have any intention to push it into other areas, there are others that do," he said.

Asked about the Farm Bureau's influence in the council rejecting the proposed rules, a council co-chairman, Rep. Jeff Wardlaw, R-Hermitage, said Friday, "To me, it was just a practical matter because ... the state is a watershed.

"We got emails the week before saying that North Fork [River] and White River would like to be added into the moratorium, so before it was ever approved, we were already seeing additional watersheds wanting to add it," he said.

"The reason for [rejecting the rules] is with our chicken industry, and hog industry around the state and turkeys and all the CAFOs [concentrated animal feeding operations] that we have, the last thing we want to do to shut our state down to those industries, so that ... behind the legislative intent of not doing a moratorium," Wardlaw said.

But Rep. David Whitaker, D-Fayetteville, said, "There seems to be a kind of a push-and-pull struggle between the governor's office and the Senate these days.

"I think this whole thing occurs against that backdrop," he said.

Whitaker said he voted against rejecting the proposed rules because he has been a strong proponent of the moratorium since day one.

"We can raise hogs all across Arkansas, but we only have one Buffalo River," he said.

In 2014, the Pollution Control and Ecology Commission placed a temporary ban on new medium and large-scale hog farms within the Buffalo River watershed after an outcry from environmentalists because of C&H.

The temporarily moratorium was repeatedly extended, including the five-year extension granted in 2015.

Steve Eddington, a spokesman or the Arkansas Farm Bureau, said Friday, "We appreciate members of the General Assembly understanding that the moratorium on farming in a particular watershed sets an alarming precedent that tramples on landowner rights.

"We have said all along that there's a way to balance environmental issues and agricultural stewardship without additional governmental regulations," he said.